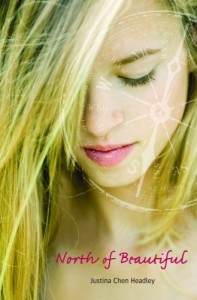 I loved your previous novel, Girl Overboard, and after going back to read your debut, Nothing But The Truth (and a few white lies), I’ve decided that you’re one of my favorite contemporary young adult novelists in recent years.   I wasn’t sure if North of Beautiful could match my love for Girl Overboard but I went in with an open mind.   The final verdict: Wow.

From behind, Terra is a stunningly beautiful: tall and blond with a knockout body.   Unfortunately she has one minor “flaw:”

While my face couldn’t launch a thousand ships, it has the power to make any stranger whip around for a second look.   Trust me, this mixture of curiosity and revulsion is nothing Helen of Troy would ever have encountered.

Terra has a port wine stain that covers her entire right cheek.   In her small Washington town, it’s branded her a freak since she was little.   And it’s not just the people in town who treat her as “flawed.”   Terra also gets it from her family.   The youngest of three children, Terra is the only one still living at home.   Her oldest brother works halfway around the world in China, and the second oldest attends college but never comes home.   The reason for their avoidance stems from their father whose determination to control everyone manifests itself via cruel, sniping criticisms.

With the boys gone, Terra and her mother, Lois, are the ones left to deal with the brunt of his daily abuse.   For Terra, this means she’s on the receiving end of insults about her “ugly” face.   For Lois, a former rodeo queen who’s been worn down by her husband’s constant barrage of petty comments, this means she gets comments about her weight, her cooking, and her dietary habits.   As a result, Lois clings to Terra, nearly suffocating her, by showering her with miracle treatments and laser treatments in the hope that “repairing” her face will give her “perfect” beauty.   It’s a sad reflection on two fronts.   First, if Lois can’t be the beautiful rodeo queen she once was, her daughter can be.   Secondly, and probably most importantly, if Terra’s face can be “fixed,” then so can their family.   Of course, it’s never that easy.

The relationship between Terra and Lois is further strained when it hits home that Terra will be graduating one year early and be heading to college next year, leaving Lois alone with her husband with no children present to serve as buffers.   So out of guilt, Terra agrees to one final treatment for her birthmark, and it’s after that fateful appointment that she nearly runs over a goth Asian boy named Jacob.   It’s this meeting that changes her life and teaches her what beauty truly means.

If Girl Overboard was a novel with multiple intersecting external events, North of Beautiful is a novel with multiple intersecting internal (emotional) currents.   The obvious one is that Terra’s been chasing after the Land of Beauty for her entire life, but it’s always been beauty as defined by other people — a father’s never-satisfied standards, a mother’s hopes that fixing Terra’s face will fix their home, a best friend who defends Terra but never really lets her shine either, and a boyfriend who loves her body but is ashamed to be seen with her in public.   Everyone’s put her in a box and in one way or another, she’s trying to escape, to become the person she wants to be.

And speaking of Terra’s father, what an awful man.   He’s the perfect illustration of how abuse isn’t limited to physical, or even yelling.   Not once does he ever raise his voice but I don’t think anyone who reads this book can see him as anything other than an abuser, not with the things he says to his wife and kids.   And all because he was professionally humiliated by trying to put forth a forged map as genuine?   As if that was their fault.   He doesn’t need to take it out on them.   What a jerk.

While some readers will be put off by the romantic aspects of the novel — because let’s face it, Terra was cheating on her boyfriend with Jacob even though her relationship with Jacob was mostly innocent although their feelings obviously went beyond the platonic — I did enjoy it because it reminded me of how high school relationships could be so messy, seemingly to bounce from one to the next without any clear delineations in between.   I do appreciate the fact that even though it’s obvious Terra is with her boyfriend, Eric, for all the wrong reasons (she’s afraid that no one else will ever want her; after all, the only reason he hooked up with her in the first place is because he fell in lust with her body) and that Jacob is the one for her, the story never vilifies Eric.   They’re wrong for each other but I think we can all remember a time when we all went out with someone just to go out with them, just because, even though there was no connection there.

Even if I don’t quite buy the thought of relative strangers going on a trip halfway around the world with each other, I did like the trip Terra and Lois took with Jacob and his mother to China.   It was wonderful watching Terra’s mother rediscover herself, the former rodeo queen who could hold her head high, and seeing Jacob’s confident, self-possessed mother show some vulnerability and weakness.   I’m curious to know how well the adoption storyline was portrayed.   It rang true for me but since I’m not adopted, that doesn’t say much about its authenticity.   On the other hand, I completely sympathized with Jacob during his time in China.   I know what it’s like to have people assume you speak the language because you’re Asian but in reality, the only one you know is English.   That I can agree with; it gets tiring — especially when they look like at you like you’re a freak or brain-damaged.

But what I loved most about the book was the prose.   I readily admit I’m not a prose lover like some of my fellow DA reviewers are.   I only really notice it when it’s exceptional one way or another.   This book reminded me of the power of first person point of view, and how it can reveal character through the words used and can give insight into what matters to them most:

But all maps lie, I wanted to tell Karin and the rest of the class and especially this holly-jolly geneticist.   Even the best maps distort the truth.   Something’s got to give when you take our three-dimensional world and flatten it down to a two-dimensional piece of paper: Greenland balloons; Africa stretches.   Entire wars have been won and lost because of maps, these keepers of secrets.   There’s power in the grid lines, in knowing where resources are, in the snaking boundaries that define countries.   I should know.   My father is a modern-day cartographer, the Ptolemy of global positioning software, and was once the most gifted liar around.

Some people will find the map analogy tiresome.   But seeing as Terra’s father was such a domineering force in her life, the all-pervasiveness of cartography and maps in her perspective worked for me.   It reminded me of how much her life has been determined by his whims.   Oh, and bonus points for including geocaching.   It makes sense, given the importance of cartography and maps in the story, but that’s not something you run across often in fiction.   A-