AUTHOR REVIEW: Nice to Come Home To by Rebecca Flowers 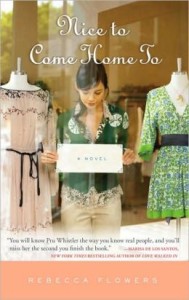 When I saw Dear Author’s call for authors to review book that haven’t gotten enough attention, my mind immediately jumped to Nice to Come Home To by Rebecca Flowers. The novel came out in 2008 and I had picked it up off the new book shelf because of the absolutely lovely cover. I liked it so much that I wrote a short review of it for a library publication and have been sticking it on my “staff picks” shelf at the library ever since. But, I’ve not read it since 2008 and decided it needed a reread before I wrote a review.

I’m so glad I did. A book that lives up to and even surpasses your memories leaves happy sighs in its wake.

Prudence Whistler’s life has been turned upside down. She’s been laid off from her job. In the lobby of a hotel she sees a pregnant woman with kids and thinks, “This is the woman I am supposed to be.” Not being married is only a small hitch—Pru’s serious boyfriend has wanted to marry her for years. Pru is a planner; she can make this happen. Of course, the big problem with being a planner is that you can’t arrange for everyone in your life to be using the same Dayminder. Just as Pru is ready to tell her boyfriend that she wants to get married, he breaks up with her.

And our story begins. Nice to Come Home To is chick lit more than romance. We only get Pru’s point of view and romance only plays a minor role. This is Pru’s journey and Flowers makes it a lovely journey. Throughout the course of the novel, Pru has to learn to unbend and open herself up to the opportunities of life, rather than trying to force life and the people around her to follow her will. This character arc is underpinned by a light romance and a lovely relationship arc between Pru and her come-what-may sister.

Pru’s character arc isn’t a new one, but her writing is fresh, with a gentle tone.  As an author and as a reader, I’ve always loved the “telling detail.” An author can include every little bit of information about a living room, but it’s better to include that one detail that tells the reader everything else they need to know. Flowers has mastered the telling detail. We know Pru plans too much because she’s picked out the perfect used stroller on eBay before she’s talked about marriage with her boyfriend. John, the love interest, is in the middle of a divorce. His marriage was already troubled when his wife had a miscarriage. All the reader needs to know about John’s marriage is in the heartbreaking detail of the still half-painted room that was supposed to be nursery.

Nice to Come Home To has some flaws. Pru seems blessed with the same monetary fairy as Rachel in Friends and some of the secondary characters slip into stereotypes. There are moments in the book that feel dated, which is to be expected in a six-year old contemporary novel. But those flaws are minor compared to the strength of the writing and freshness Flowers has brought to the book’s well-trodden theme.

I want to close with my favorite line:

“Anyway, I’m not saying play a game. I’m saying give the guy something to hold onto. He’s floundering out there, and you throw him a stone. I mean, what if this guy is your destiny? Are you going to give up on your destiny so easily? On your whole future? On your children’s future?”

Who among us hasn’t felt that way at some point in our lives?

Jennifer Lohmann is a Rocky Mountain girl at heart, having grown up in southern Idaho and Salt Lake City. As part of Harlequin’s “So You Think You Can Write” Contest, she was offered a contract on her first book in 2012, published as Reservations for Two in February of 2013. Set in the Polish communities of Chicago, Reservations for Two sent many readers out to the store to buy pierogi. Her second book, The First Move, was an All About Romance Desert Island Keeper and won praise for its heartfelt portrayal of a woman still struggling her decision to relinquish a child as a teenager. When she’s not writing or working as a public librarian, she wrangles two cats and a flock of backyard chickens; the dog is better behaved. You can find her online on Twitter as @iferlohmann (https://twitter.com/iferlohmann), on Facebook (https://www.facebook.com/iferlohmann), and on Goodreads (https://www.goodreads.com/author/show/6468590.Jennifer_Lohmann) and sign up for her newsletter on her website (http://jenniferlohmann.com/contact/)