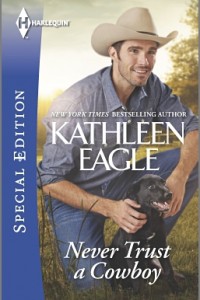 When a Cowboy Comes Calling…

The last thing harried Lila Flynn needed was another cowboy to deal with. But new hire Del Fox was different than most sweet-talking wranglers. The hard worker had a gentle touch and eyes that spoke of a past he didn’t share. Lila soon found her hardened heart softening, frightening her more than any other hurdles she was facing.

Del’s assignment in Short Straw, South Dakota, was meant to be fast and simple. Falling for Lila Flynn, however, had complicated everything. If he did his job right it would mean destroying everything Lila had worked for. He’d given her every reason never to trust him again. But when all was said and done, would she trust their love enough to give them a second chance?

This book might have a slow start but it’s like kind of like a recipe that takes a bit of prep work before slow cooking brings it all together as a delicious and satisfying meal. Mix one smooth talking cowboy with a woman who isn’t initially ready to be smooth talked plus one cute dog, some hard truths and modern cattle rustlers and voila. I also enjoyed the slight hints of “The Long, Hot Summer” that came to mind as I read the story.

Del Fox is a man ready to put in a hard days work if he can just get a dishonest man to hire him. Del’s done some things wrong in the past but those days are behind him and along with the solid, grounded raising he got from his Lakota father he’s doing things right now. It’s his bad luck to fall for a woman just when he needs to keep his head in the game and his eye on the ball.

Lila Flynn is a tenderhearted woman but she’s no fool and not about to let this slick, though hardworking, new hire get too deep into her life. But Del’s genuine interest in her, his thoughtfulness over a loss she suffers and his willingness to help her out on his own time with projects for her daycare and free community library all point to him being one of the good guys.

Actions speak louder than words and with all he’s done for Lila and her father, he’s just about yelling from the rooftops how he really feels about her. Del’s an alpha in the best sense of the term. He cares for and takes care of those he loves. Lila has just enough reserve to show me she won’t fall for the wrong type of man along with the honesty to admit when she’s given her heart and the courage to initiate what she wants.

I love the descriptions of a place you obviously know well and a type of people who are – for the most part – salt of the earth. The writing is pared down to the basics but when the words are as well chosen, that’s all that’s needed to set the place, people and time. I also enjoyed the delicate touches that ground Del’s Lakota heritage as well as the meeting he has with an elder wherein they size each other up, feel each other out, share some Indian humor and silently commiserate over the sometimes harsh reality of 21st century tribal life.

When the truth is revealed, rather more harshly than Del would have liked, another book might have spun Lila’s sense of betrayal out for at least a few more chapters but here Lila thinks about her feelings, what she knows to be true and is willing to trust her man – which is a good thing seeing as they’re just about to pledge their HEA. I do get tired of romance books in which the hero and heroine mistrust until the last page and then Suddenly! trust each other for a lifetime. The windup is a bit short, to be honest, but the ground work already laid that builds to a lasting relationship is solid and more than enough for me to believe. B