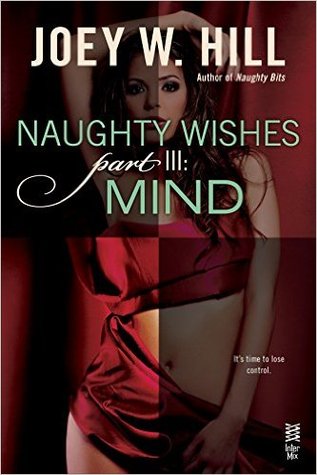 I said in my initial review that I found myself feeling “overfull” during my read of “Mind” and that I decided to read something else as a bit of a palate cleanser in between it and the final novella of the serial, “Soul”. The “too much” feeling was a result of reading all three one after the other I think. They were intended to be read with some time and distance in between them and it made sense to me that read all together they may make an over-rich dessert.

But “Mind” has been the least successful part of this serial for me (so far at least, I have yet to read “Soul”) for other reasons too.

First however, to what I liked. I liked the backstory the reader is given about how Chris and Geoff met and how important their friendship has been over the years. For Geoff in particular, Chris was a lifeline after being disowned by his own mother. Geoff and Chris have been best friends, through thick and thin, over many years.

While Chris has always known that Geoff is comfortably bisexual and also a Dom, Chris’s sexual preferences have been less transparent. In the previous story, Chris found latent Dom-y tendencies; he enjoyed tying Sam up and the idea of spanking her was hot, but this was more to do with his pleasure at her reaction than his own pleasure at being in charge. (Geoff, on the other hand, finds pleasure in both things and really needs both things for his own enjoyment to be complete.) Chris is content to let Geoff take the lead with Sam in many ways but he makes it clear he is not submissive in the sense Sam is and that he will have his share of leading in their relationship. That creates a tension between the men of course, amped up with the underlying sexual tension between them.

Sam has gone on a business trip, leaving the men alone at home. For the first time, the reader is privy to both Geoff’s and Chris’s POV as it alternates throughout the story. I am glad that this occurred; I don’t think it could have worked only showing the development of the relationship between the two men only from an observer’s point of view. (Obviously, it was impossible anyway, what with Sam not actually being present for much of the story.)

In “Heart” the reader sees that there is clearly sexual interest toward Geoff on Chris’s part but he was taking some time to get his mind around it. And this is where the title and theme of part three comes from.

However, I found that there was a bit too much of the “mind” about this novella. Chris and Geoff went round and round each other, having deep and meaningful conversations which didn’t seem to me to actually say anything much. It was more a “vibe” than anything explicitly stated. At least, that’s the impression I was left with. While this may work in real life, in a novel, it’s less than satisfying.  Things between Geoff and Sam and Chris and Sam were relatively simple and straightforward. As between Geoff and Chris however, matters are far more complicated. Is Chris prepared to submit to Geoff ever? Is he prepared to even have sex with Geoff or will it be left at only incidental touching while they’re both having sex with Sam? Can Chris comfortably acknowledge his bisexuality? These were all questions which clearly needed to be answered, but for me, they delved into psychobabble and doublespeak much of the the time and I became impatient with it. I think this shows my preference for direct speech over beating about the bush; other readers may find it not a problem at all. Also, I’m not good at subtle so it may be that I just missed things.

The other thing which concerned me was something I’d picked up on a little in the earlier stories but which was made obvious to me here. I think Naughty Wishes is a little too gender essentialist and some of the tone bothered me.

He moved into the room, pausing outside the shower door. If it had been Sam on the other side, he would have put up his hand without thought, let her press hers to it, a romantic gesture so easy to do with women.

The “he”  of the sentence is Geoff; the man who is comfortably bi. He gets over himself and takes a step toward intimacy but I found it incongruent with his character.

Then, there were repeated comments/thoughts by both Geoff and Chris such as:

Geoff gripped his hand, and there they were, holding hands like a couple of girls, but it felt right.

Really? “Like a couple of girls“? Like that’s a bad thing? Like it isn’t entirely natural for partners of the same gender identity (or any gender identity) to hold hands? (with the caveat that some people are not the hand-holding type at all of course).

When he’d been with Sam, a well of feeling had cracked open inside him. Woman was a vessel that could take all that feeling, absorb it into her, keep a man balanced.

I just don’t agree that only women can do that. And it is actually clear in the book that it is not true anyway.

Geoff was the worst offender, something which surprised me given his “comfortably bisexual” persona but Chris had a lot of discomfort of anything he perceived as being like a “girl”. Even given his clear respect for Sam and her abilities and strengths, I found it insulting.  Please God can we stop using “like a girl” as a pejorative?

I read a fair bit of m/m. There are some stories where there is clearly a partner who prefers only to be the pitcher and the other the catcher. In others, the men like to switch it up. I have a personal beef with stories where the switching happens only as a result of some kind of sex checklist so that everyone’s orifices are penetrated. I don’t quite think that happened here. But I did question it because the reasons given did not entirely convince me. On the other hand, it did fit with the push/pull between Chris and Geoff over who would be dominant in their relationship; if that had’ve been the posited reason I may well have had no misgivings. As it is, I’m on the fence about it.

The most fascinating thing to me about these two men is that push/pull and I’m not entirely sure it was resolved here. Maybe it wasn’t intended to be; perhaps it will be an ongoing tension (not necessarily the bad kind) in their relationship which will keep them on their toes. But I have a feeling I’m supposed to have understood more from the various deep and meaningfuls Geoff and Chris had. Unfortunately, a lot of it went over my head.

Perhaps I’d have enjoyed the story more if I had left some time between parts two and three. I thought about it (I was beginning to recognised some of that “too much” fatigue) but I made a start when I was thinking about it and then it was too late. But I think it is regardless, for me, a weaker section than what went before. I give “Mind” a C.