Apparently there is some rumor that I was/am/will be publishing a book under a different pen name. This book was supposedly contracted by Angela James at Quartet Press and this is the reason for my disappointment at the fall of Quartet Press.

Unfortunately for all you readers out there, this is not true. I have not written a book nor do I have plans to write a book and I’ve never discussed any book writing with Angela James or any editor out there. Someone appears to read my twitter account and I once joked about writing a were gerbil story (also other were rodent stories and sometimes were cracken stories). This has been taken as truth and has turned “I’m going to write about were gerbils” into “And today, lo and behold, Quartet Press, which had been praised and cheerleaded to the high heavens for months by the very same bloggers that had viciously derided Ravenous Romance and its authors (not to mention had hired one of the aforementioned editors who had joined in the hazing, and had even publicly announced it would publish the ringleader blogger’s debut novel) collapsed and shut down today before it published a single book.” 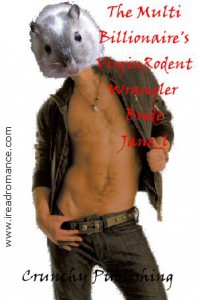 I read romance wrote up a fabulous review for this non existant book and I thought it would be great fun to host a contest for all those who have been dying to write a Dear Jane letter.   I expect them to be scathing so Bring. It. On.   Positive or Negative, it doesn’t matter. It just needs to be entertaining.   The entries should be   posted in the comments.   (Please feel free to make up your own excerpts for the review).

Here is the back cover copy:

SHE THOUGHT SHE SMELLED A RAT…

Ho-Lotta Fagina, an innocent adrift in a ruthless world, just wanted to get on with her life and forget her forbidden attraction to her brother’s best friend. She felt as though she’d loved “Chee” forever, but she knows it’s time to discard the dream that has cost her so much. Determined to forget his gleaming black eyes and luxurious mane of hair, Ho-Lotta picks up a whip and begins a journey into the heart of darkness…

HE WAS TIRED OF JUST  SQUEAKING BY…

Cheesel McNaughtynuts is a man with a secret. Desperately in love with Ho-Lotta for years, it’s only when he is confronted with the prospect of losing her forever that he is compelled to reveal his hidden shame. For Chee is a GerShifter. The last of his kind, he is forced into a life of secrecy and shame. For should the Government ever find out just what he is…all would be lost. Together, Ho-Lotta and Chee must make a break for freedom, escaping the wheel of destiny and racing down the Hershey highway in an effort to claim their own happily-ever-after.

The winner will receive a lovely ARC of Jill Myles’ Gentlemen Prefer Succubi, a book slated to release late December 2009.   (It’s about a girl who gets turned into a succubus and is forced to have sex with an angel and a vampire in order to stay alive.   God, the dilemmas some people have) AND a $25 GC to Amazon. Contest will run through Sunday night, 7 pM CST.

→ Jane
Previous article: Friday News Roundup: Positivity in the face of poor quality is cruelty of its own
Next Post: First Page Saturday: OH MY GOD! MY GIRLFRIEND'S A BARBARIAN… (Or POLITICIAN? can’t decide)