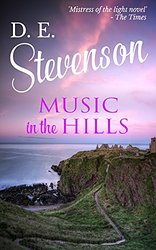 He starts a new life at Mureth House, the home of his aunt and uncle, Mamie and Jock Johnstone, where he hopes to learn to be a farmer. But he soon learns that picking up farming isn’t an easy task, and is made even more complicated by the unexpected ups and down of rural village life. Sheep stealing crooks, village gossip, love-struck teenage runaways and a brunette bombshell all disturb the peaceful solitude James had willingly signed up for.

And of course there’s Rhoda Ware, the woman he left behind… Does Rhoda feel the same way? Could she be the key to James’ happiness? Together, can they learn to see beauty in the wild moorlands and hear the music in the hills…?

Music in the Hills is the delightful sequel to D. E. Stevenson’s Vittoria Cottage.

This is another reissued D.E. Stevenson book. It’s a sequel to “Vittoria Cottage” but as Stevenson herself said in her intro, it can be read on its own as everything that needs to be known from the first book is neatly included where the information is needed without resorting to the dreaded info dump. Stevenson knew this area well and lightly sprinkles some local phrases and words in the story but the meaning is always clear. Her Scots characters speak with turns of phrase and idioms that convey how it might sound without resorting to dialectic spelling. Another important point is that this book is as much about the land, farming and specifically Mureth Farm as it is relationships between people. In this it is much like “Celia’s House.”

James Dering is indeed back from Malaya but the book doesn’t give him PTSD to deal with. Later when speaking with someone who has also seen much of the world, he speaks candidly about his time there and that remembering it too much can give him nightmares. He also thinks little of people who casually ask him about it but who don’t really want to know. What he wants to do is be a farmer and his Aunt (sister to James’s mother who is the heroine of Vittoria Cottage) Mamie and Uncle Jock have offered to help teach and train him.

They own Mureth Farm, as well as another one nearby, in the lowlands of Scotland. James has been there before but always as a beloved relative-guest rather than a potential worker. Jock declares that James needs a week or so to get settled and then after that, he’ll work James as hard as needed. As James gets used to living on the farm, he meets the employees, learns the lay of the land and begins to fit in – something he does naturally and easily thus setting Mamie’s mind at rest. Jock is impressed as well and both agree that James “will do.”

As James learns the intricacies and duties he’ll need to master in order to be a successful farmer, we easily learn them too. There’s pasture drainage, dyke repair, hay harvesting and all about sheep. The newly hired head shepherd informs James that as much as you know about sheep, there’s always more to learn. James is as impressed with Daniel’s collie as I am. Truth – I am fascinated by sheep trials.

There are also delicately included details of post war Britain which was still rationing petrol and food, dictating to farmers what they could do with their own stock, limiting building repairs to manage still scarce materials and a place of changing social conventions and thoughts. Still there is a timelessness about the place, people and life there. One delightful scene has all the employees at Mureth turning out to watch the Royal Train pass by just to be able to see and wave to their King. Stevenson also has a housekeeper chalking ancient pagan symbols on a doorstep each morning to “protect” the house. Some would love it and cherish it while others – “smart” Londoners – would always see it as backwards and deadly dull. Another warning here that this book was written in 1950 with a timeframe of 1949 and there are references to social class and how people viewed working women, women’s education and foreigners at that time.

This last bit serves to show who is going to make it there – James and one other as we’ll see – and who would never be happy or fit in. Mamie might not see herself as intelligent but she can get a sense of people and immediately worries about one person. Jock does as well although they’re willing to stay out of events and see what will happen. It will be up to James to figure out his mind and his heart. Fair warning that this doesn’t come until almost the end of the book but hints of which way he will go are placed along the way.

In the meantime, there is a lovely secondary established romance which James will use as the benchmark to guide him and which he admires from the start. Mamie and Jock have been happily married for about twenty years and it is a delight to read about their marriage. They are each other’s best friend and confidant. Each misses the other when they’re apart even if it’s only for the day. They have a deep understanding and enjoy each other’s company, communicating in that unspoken way of a long relationship based on trust, love and mutual respect. James knows that if he marries, this is what he wants too.

As in many Stevenson books, events flow along sometimes seemingly unconnected. Yet they often wind back together and are used to spotlight character growth and propel the plot to a conclusion. In the end, James finds a career he loves, his place at Mureth Farm, and his true love. Sigh … now on to read the last book in the trilogy to see how that works out. B