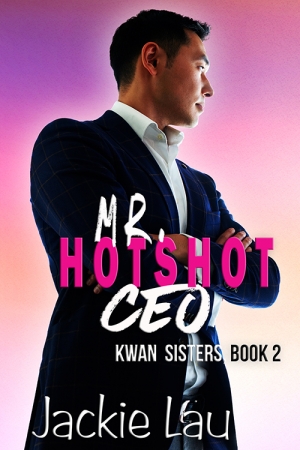 Content warning: The book contains discussion/themes of mental illness (depression) which may be triggering for some readers.

I had mixed success with your earlier book, Grumpy Fake Boyfriend. I’m pleased to say that Mr. Hotshot CEO worked better for me. Perhaps in part I was more used to your writing style and that made it easier for me to relax into the story. I certainly liked the hero better in this one and as a hero-centric reader that was always going to make a difference. Perhaps it had something to do with my reading mood. Maybe all three. In any event, I connected with the characters more quickly in this book and I enjoyed the humour of it more as well.

You do jump straight into the story, that’s for sure. Readers can’t complain about a lack of action on page one. Julian Fong is CEO of Fong Investments, a large investment firm based in Toronto. Three years earlier, Julian’s father had a heart attack leaving Julian in charge. Julian’s dad is fine – but after the health scare he decided to retire and play golf. Julian has always had a streak of workaholic in him but since he took over the business, he routinely works 14-16 hour days, every day. He drinks too much espresso and gets little sleep. At the beginning of the book his family stage an intervention, announcing they are making him take two weeks off work or else. He thinks they’re joking but when Julian’s grandmother (whom he calls Po Po) threatens to bring a new potential bride to his office every day and also to play Chinese opera music – loudly – outside his office door all day every day, he knows there is not escaping this enforced vacation.

Julian doesn’t really know how to relax and have fun. He’s not a “stop and smell the roses” kind of guy. His sense of humour went missing somewhere upwards of three years ago and he’s at a loss of what to do when he’s not working. Within a day he’s bored, bored, bored and he decides to take himself out for coffee for something to do.

I’m not sure whether Chris’s Coffee Shop is actually owned by a guy named Chris, or whether it’s just called that so they can have pictures of Chris Evans, Chris Pratt, Chris Hemsworth, and Chris Pine on the walls, plus a picture of Christopher Plummer on the door. I think it’s silly, but they make good espresso and the second floor is always quiet.

On impulse he approaches her and in about ten seconds flat he is asking for her assistance in “having fun” while he’s on holiday. He can tell she knows how to enjoy the little things he constantly misses. He wants her to teach him how to do it.

Julian is not a man who does things by halves. He offers her $5,000 to spend the two weeks with him living in his penthouse (staying in the guest bedroom) to maximise their time together as she will still be working at the lab (she’s a research scientist) during the week. As it happens, Courtney could really use that $5,000. Her sister, Naomi, has had some unexpected financial trouble which has meant she will be unable to accompany Courtney to New York for a vacation later in the year. Courtney was relying on that trip with Naomi as part of her mental health plan (more about this later) and she figures if she can give the money to Naomi, she and her sister can go to New York after all.

There is an overt Pretty Woman vibe about the book. Except Courtney is not a prostitute with a heart of gold a la Miss Vivienne.

There are other differences of course. Courtney is an independent professional woman not in need of money for herself. Courtney also has depression. Her symptoms first started when she was 16 and since then, regular as clockwork she has had a bout of severe depression every five years. Courtney knows she is due for another debilitating experience in a couple of short months. Going to New York with Naomi, from whom she derives significant support, was a big part of her coping strategy for the next little bit.

Courtney had little support from her parents or brother with her mental illness but Naomi has always been there for her. When Courtney was in college, she became very depressed and had to be hospitalised on suicide watch at one point. She had to delay graduation for a year as she recovered. And her boyfriend at the time couldn’t handle it all and dumped her which only made everything worse, even though Courtney understands that if Dane didn’t want to be with her he was under no obligation to stay just because she was sick.

Even though she’s attracted by Julian, she is not in the market for a relationship. She knows her five yearly episode of depression is almost upon her and it is entirely  not the right time to start anything. She’s also not cut out for flings; she gets too attached too quickly.

Julian is in the market for a fling but not for a relationship. He’s been reliably informed by previous girlfriends that he is not boyfriend material. He works too much and puts the business before anything or anyone else.

Nevertheless, as Julian and Courtney find themselves in close proximity, their attraction builds, the unresolved sexual tension simmers and begins to boil and they find themselves flinging anyway. Courtney lies to herself that she can, this one time, cope with a fling. She doesn’t even try very hard to hide that she’s lying to herself. She wants some happy and really, why not?

I have some experience with depression, enough to know that there are many forms of it. The book is very explicit in what it’s talking about when it comes to mental illness.

I don’t know what depression is like for other people, but this is what it’s like for me.

While the cyclical severe depression every five years with intervening smaller episodes requiring constant self care is not my experience, I accepted Courtney’s experience as written.

Courtney’s depression is also treatment-resistant. Some of what she eventually tells Julian rang particularly true – especially the bit about tai chi or yoga.

“Sometimes it lasts six months, sometimes well over a year. The one constant is that it goes away after I’ve given up on treatment, so that’s how I know none of those things have worked.” She reaches for her teacup. “It’s not supposed to be like this. You’re supposed to try a few drugs and find one that works. Maybe it won’t be the first drug, but you’re supposed to find something soon enough. But there are many people like me who have treatment-resistant depression. And if you suggest a little yoga or tai chi will fix it, I will stab you.”

Over the course of the book Courtney is very successful in showing Julian how to relax. One of the first things she does for him is to buy him a suggestive cactus – something his brothers tease him about thereafter.

“Oh!” Vince says. “I almost forgot the other thing I noticed in your bedroom. Joey the Phallic Cactus now has a prime seat by your window. How long has he been there?”

“Joey is a real cactus,” Vince says. “Lots of potential for symbolism, don’t you think?”

The attraction grows and they become close but Courtney is terrified Julian will be like everyone else in her life apart from Naomi and will not be able to handle her when her depression is symptomatic. Julian is a champion though. Here is a large part of why I loved him.

“Courtney?” It’s Julian. He’s standing in the doorway, frowning. “Why are you in the guest room?”

It’s early and my brain isn’t functional enough to come up with a compelling lie. “I wasn’t feeling great, so I came here in the middle of the night.”

“Are you coming down with something? Do you have a fever? A sore throat?” His eyebrows knit together, and his concern is touching. “Do you need to go to the doctor?”

I sit up and shake my head. “No fever or anything. I’m just…not feeling great.”

But he doesn’t ask, perhaps sensing I don’t want to talk about it. Instead, he crawls into bed with me and curls his body around me from behind.

He’s just holding me, nothing more, and there’s something lovely about being held, especially by Julian. A person’s touch is so simple, yet it can mean so much. It won’t make last night go away, but it makes me feel a little better. A little less alone, even if it’s only temporary. I’m still tender and vulnerable, but I can feel myself getting stronger with each breath.

“If you’d prefer to be by yourself, I can leave,” he says.

I burrow against him. “No, I want you to stay.”

He holds me closer and wraps his leg over mine so I’m completely surrounded by him. It almost feels like he could make everything go away, make me whole again, turn me into a person who doesn’t fall to pieces because her laptop isn’t charged. Or because she tripped over a piece of furniture or knocked a pile of books off her desk. Even Julian Fong is not that powerful, but he’s still good for my mental health right now, and I’ll take what he’s giving me.

“Ignore that,” he says when I rub back against him. “I’m sorry, I can’t help it when I’m with you. We certainly don’t need to do anything now.”

My impression was the you know a bit about depression yourself and this felt a bit like a book from the heart. I hope you have a Julian of your own if so, but if you don’t, you know what to look for.

The book is also a bit of an ode to Toronto. As the characters explore various parts of the city, I could feel your obvious love for it. There was a strong sense of place in the book and it made me want to go there. I also enjoyed the Chinese culture and the distinct differences between those who had emigrated to Canada from Hong Kong and those who had emigrated from mainland China, as well as the factoids about the various Chinatowns in Toronto, food and culture. Julian’s family, in particular, is messy and loud but oh so loving. I do hope there are books for Vince and Cedric – I can tell there are stories there and I’m very curious.