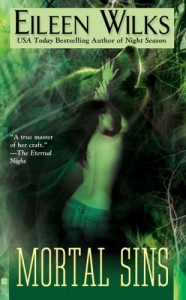 I fell for Lily Yu and Rule Turner in Tempting Danger and despite the many twists and turns that the series took, I haven’t lost my affection for them. When I first read the series, I thought it was going to be a supernatural Eve/Roarke-ish type series where Lily Yu, a former detective and now part of the FBI Magical Crimes Divison, plays the female crime fighting part of the coupling and Rule Turner, heir to the largest and most powerful werewolf clans, played the Roarke part.    This is not to say that Lily and Rule are anything like Eve and Roarke, only that it would be an ongoing series featuring the two of them solving magical crimes. To some extent this is what the stories are about, but since Tempting Danger the books have focused heavily on building the world rather than solving crimes.

The magical setting in which Lily and Rule inhabit has gone from understandable to complex. Every book provides us with one more new aspect to the World of the Lupi but even the series name “World of the Lupi” is deceiving.       It has extended beyond the idea of Lupi and sorcery that were presented in the first book but has expanded to include nearly every possible myth and legend from werewolves to dragons; from sorcery to gnomes.    The Lupi are but a tiny part of the overall magic of the cosmos.

Mortal Sins is ambitious and not a book for a newcomer to the series.   I’ve read all the books and I still had trouble remembering many details that provide basis for some of the events in Mortal Sins.   Lily and Rule are in Hal, North Carolina, wherein Rule is becoming familiar with being the heir to the Leidolf clan, once the powerful rival of Rule’s clan, Nikolai.   Rule is also trying to wrap up the details surrounding his son, Toby’s, legal custody; severing Toby’s absentee mother’s claims and bringing Toby with him to the Nikolai clan.

Because of the mate bond between Rule and Lily which requires them to be within a certain distance of each other, Lily is conveniently located to investigate a number of murders that smell of death magic.   Someone, or something, is attaching itself to people and causing them to enact gruesome murders.   The murder mystery is a strong part of the book with tiny hints of the cause and solution dribbled along for the reader to recognize and appreciate when the mystery is solved.

The problem is that a new magic is inserted into the story (despite death magic being a part of past stories) and it was so detailed and so complicated that it made my eyes glaze over. By the third re-read of some pages, I gave up in the middle of the book trying to actually comprehend the new magic and what the characters were talking about. In the end, it appeared that I didn’t need to pay attention because what it came down to was fairly simple.

The emotional arc between Lily and Rule and the inter Lupi politics is such a rich area to mine that I feel sad when the story divurges from those core themes. It’s distracting and serves to confuse the reader. In fact, there is a great moment in the story that affects Lily and Rule’s mate bond that could have been plumbed for so much effect but it is resolved in a matter of pages. It seemed like a lost opportunity.

I haven’t given up on Lily and Rule.   While it took an effort to finish the book, there were definite rewards.   I’ll pick up the next book, but I’ll be girding my loins for another mysterious magic that I doubt I’ll grasp well until the end. C