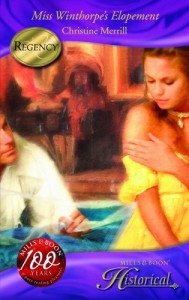 Your latest book (so far only available at Mills and Boon in both print and eform), is one that unfortunately doesn’t work as well for me as the last title of yours I read. Sorry but there’s just no other way to say it.

The book starts off as a typical Bluestocking Heroine novel. Penny Winthorpe, spinster, lives with her brother Hector and frets that she’s under his thumb. Penny’s one foray into Society was a disaster. Now she closets herself in her brother’s home, reading books and hoping to publish a translation of “The Odyssey.” Hector issues an ultimatum. Penny must turn her actions to Good Works and away from reading so many books. It’s not natural and since he was left in charge of her inheritance by their deceased father, what he says goes. Or she can get married and try to gain control of her money from her husband but either way, no more books while he’s in control.

Penny is stunned. And determined to outflank Hector’s draconian decree. And it’s here that this book turns into a Wallpaper Historical. Suddenly we have our heroine, in the company of an older footman, riding off in the family coach in search of a husband. Penny’s plan? Why to find an easy going man to marry her for her money. A dullard she can bribe with her immense fortune. She’ll give him control of lots of lovely money, not put any restrictions on his actions, not make any social demands on him and in return, he’ll let her live as she wants. Namely, surrounded by books.

Her footman, Jem, stammers out all the problems inherent with this plan but Penny blithely waves them off. She knows what she’s doing. So they head towards Scotland with Penny checking out every pub and tavern along the way. With Scotland just over the horizon, she finds her man.

Adam Felkirk, Duke of Bellston is drunk and face down in the mud having tried to commit suicide under Penny’s coach wheels due to his crushing debt. He also seems to think that his bad luck is at fault for his latest investment – a shipload of tobacco from America – going down with all hands. I’m used to seeing martyr heroines but martyr heroes are fewer on the ground. Adam’s sense of martyrdom is extreme though it seems to come and go throughout the book.

Anyway, if he offs himself, the life insurance policy will pay off the debts and his younger brother can be the Duke. Adam does retain the sense to try and make his suicide look like an accident since the Crown could take back his nice title otherwise. I wondered why Adam never thinks to resort to the time honored method of marrying some nice, rich young woman whose family would sell their souls to have their daughter be a Duchess.

After Jem picks Adam up out of the muck, Penny decides she’s found her dupe. The man is nice looking, genial – since he’s drunk – and seems like he’ll do. Jem is as horrified as I am. It’s not until the next morning after the marriage at Gretna Green that Penny begins to think she might have acted hastily. After all, what does she really know about this man she’s just linked herself to for life? I’m nodding my head as she lists the ways she might have just screwed up, big time.

Up til now, Adam hasn’t impressed me much but finally I begin to see he might not be all bad. Penny offers to let him out of their marriage. They’ll both go back to England and forget it ever happened. Adam informs her that he can’t do that as he’ll know what they did and as a man of honor, he can’t condone it. Point for Adam. Plus there’s the fact that the annulment Penny then mentions isn’t as easy to obtain as she seems to think. I believe proven impotence was one of the few legal ways to get one.

During the trip back to London and immediately afterward, Adam’s stock soars, IMO. He treats Penny with courtesy, tells off her rude brother and installs her as Duchess at his townhouse. He pulls the occasional Ducal hauteur when needed but otherwise he’s a good bloke. He’s also got enough sense to realize, like the Duke of Bedwyn in “Slightly Married,” that he needs to officially bring Penny out in society so it’s not thought he’s ashamed of her.

It takes some Hauteur to get Penny to go along but Adam supports her in the face of her awful brother and his ghastly friends in particular and society in general. I’m starting to really like Adam, despite the fact that he’s beginning to display the typical Romance Rake turned Hero signs such as suddenly not being interested in his long term mistress now that he’s married. Penny impresses him with her mind, her political savvy, her courage in the face of society snobs.

When his friend starts flirting with her, he finds himself jealous. And decides to lay down the law about adultery being okay for society wives who’ve given their husbands legitimate heirs but since Penny hasn’t done that, she can’t stray despite the fact that he has had liaisons with married women – including the wife of his best friend.

It’s at this point that readers might find themselves at a fork in the road about Adam. His actions could be seen as heavy handed and unfair to Penny and/or realistic for a nobleman of the times. I am also goggled eyed that a hero could stoop to banging his lifelong friend’s wife but then I think, damn, she’s given her hero something to really live down unlike the usual ultimately ridiculous faults that litter the backstory of so many heroes. Brava for that.

It’s also at this point that Penny and Adam decide to junk their agreement to live separate lives. And I just have to add that losing one’s virginity on a dining room table is not sexy to me. With so many pages left in the story, I was afraid that a Big Misunderstanding was lurking in the wings. And it was. Penny and Adam, of course, manage to work out their problems – this is a romance novel after all – but you leave us with a little hard reality as well.

Penny is told that Society will always be watching her for faults since she’s the daughter of a cit. Adam has to face the loss of a man he called friend. He also knows that the public defenses he’s already made of his wife among his social peers probably won’t be the last. Together they might have to face down a scandal should his spurned lover decide to go public. But, despite all these issues still hanging over their heads, I do get the feeling that these two are a team and that they’ve got what it takes in the long run. I know you’ll be disappointed with my final grade but, in the end, the pluses and minuses balanced to a C-.

This book can be purchased in mass market from Mills and Boon in both print and eformat. The eformat, however, is Adobe Digital Editions.

→ Jayne
Previous article: Start Up EPress Sending Lots of Unsolicited Emails to Authors and Readers
Next Post: The “Try Before You Buy” Promotion Hits DailyLit