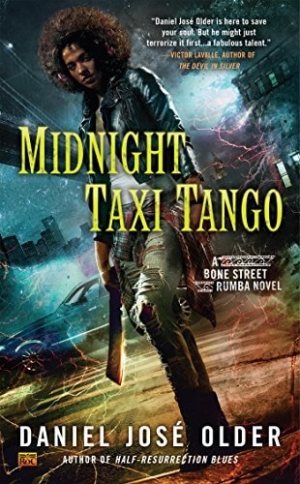 Last year, I read your debut novel Half-Resurrection Blues and loved it. For me, it was a refreshing take on urban fantasy – and long-time Dear Author readers will know how I feel about that subgenre! The narrative voice was beautiful. It was like music captured in prose form. It featured a New York City that was actually diverse! And I don’t mean in a paper-thin, superficial way either. The NYC portrayed in your Bone Street Rumba novels is alive and vibrant, as are the characters who live there. Given how much I enjoyed it, picking up the sequel Midnight Taxi Tango was a foregone conclusion.

The sequel picks up after the events of Half-Resurrection Blues. Inbetweener Carlos Delacruz is nursing a broken heart after his lady love, Sasha, left him. He doesn’t have time to brood over it, though. A string of strange, decidedly paranormal deaths have started happening, and Carlos and his crew need to figure out what’s behind them before something even worse happens.

Because Half-Resurrection Blues was told solely from Carlos’s POV, I was surprised to find Midnight Taxi Tango rotating between three narrators: Carlos, Kia, and Reza. This change in approach brought some advantages and disadvantages to the story. With Kia and Reza requiring narrator time, we didn’t have to spend as much time with Carlos. Don’t get me wrong. I love Carlos and I understand why he was struggling so much, but I didn’t get swept up by his voice the same way I did in the previous book. If I’d had to spend an entire novel with only him as the narrator, I don’t know if I would have liked the book as much.

Kia and Reza also bring some great female presence to the book. One of my major complaints about Half-Resurrection Blues was the lack of women in the forefront. Yes, there was Sasha but she was very much cast in the role of the love interest and read a bit like a cipher. Having Kia and Reza – two very different women at two very different points in their lives – play large roles addressed that, and I really appreciated it.

On the other hand, because we start out with three different POVs, the novel reads a bit disjointed in the beginning. I had faith that the storylines would converge – how could they not? – but it required patience on my part to wait for that to happen. I was even thrown by the fact that Kia didn’t even realize what Carlos was. It makes perfect sense, obviously. Why would she? That’s not something he advertises. The readjustment I had to make wasn’t necessarily a bad thing, but it was another thing that made it difficult to sink into the narrative.

What I really enjoyed with this book was how the characters were unapologetically speaking from a minority, oppressed perspective. The small scenes where Kia has to deal with street harassment? I think most women can empathize with that experience. The scene where Carlos and Reza pretend to be cops and talk to Jeremy and Caitlin’s parents? I thought it perfectly captured modern socioeconomic and racial dynamics. Details like these struck me as real and true.

Despite these things, however, I just wasn’t engrossed by the story itself. The antagonists didn’t interest me – although they did gross me out, so good job on that! (This shouldn’t have surprised me. I’ve read some of your short fiction, and your horror has always had those elements.) The connection between the villains and Carlos and Sasha felt a bit convenient. When that reveal happened, my reaction was, “Oh, of course” but not in a good way. Considering how well done the book is in other aspects, I thought the weaknesses in this area were only further highlighted.

While I didn’t think Midnight Taxi Tango quite lived up to the promise of Half-Resurrection Blues, I thought it was a good follow-up. There’s a lot to like about these books and I think readers looking for fresh urban fantasy that actually reads urban and takes place in a NYC that reflects reality will find a lot to love here. Personally, I’m a bit on the fence as to whether or not to continue reading the series. In the end, it’s plot and characters that keep me coming back for more. Maybe I’ll wait for reviews of the next one before I decide. B