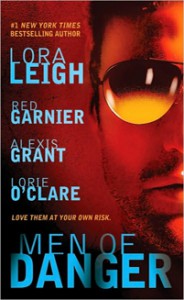 When I see the title of this book, I can’t help but think of   Mike Meyer’s horrid accent saying “Austin DANGER Powers”. I adored the first installment of Austin Powers and will willingly get sucked into it any time I see it on TV. Men of Danger has little in common with Austin Powers, including it’s lack of ability to suck me in. I was unable to relate to, be interested by, or get excited about any of the characters in these stories. And since I think that a 10,000 foot view doesn’t help anyone’s expectations, here’s some detail:

Hannah’s Luck by Lora Leigh
I haven’t a clue why Hanna Brookes is lucky. Because she has Rick Grayson to protect her? He’s the reason the baddies are after her to begin with. Heh. I’ll back up here: Rick Grayson is a sheriff who discovered that his wife was a coke whore working with a homegrown terrorist group interested in exterminating Latin and Mexican Americans. The capper? He gunned her down in cold blood during the takedown. While Rick’s marriage was a lie during the years leading up to the shooting, he has been hesitant to get involved with anyone because he isn’t sure…about something. It was such a flimsy excuse for wanting to remain out of play that I can’t remember exactly why he didn’t want to get serious with anyone. However, he’s been attracted to Hannah Brookes for years and finally takes her out to dinner, fighting erection after erection while trying to alternately get her hot and then cold.

Ms. Leigh’s writing is usually hot and sexy with that ridiculous alpha male vibe. In this case, it didn’t happen here for me. I felt that Rick’s caveman attitude didn’t jibe with his love for his sister or his child or even his police work. And his total blind spot when it came to figuring out who-done-it had me laughing. Hannah was along for the ride and the soaked panties. C

Reckless by Red Garnier
Paige Avery is back in Phoenix to try and pick up the pieces of her fractured life and missing memories after the death of her mother. Before Paige makes it through a day in Phoenix, she’s attacked and Detective Zach Rivers is on the case. Complicating things is Paige and Zach’s history; they were high school sweethearts. But during senior year, Zach ended up being the prime suspect for the murder of Paige’s father. Rather than give up, Zach pulls himself up by his bootstraps and makes it to the rank of police detective. He is obsessed with both Paige and the Avery murder case, and won’t stop until he’s figured them both out.

While I love a story with a lot of history, it seemed like both Paige and Zach lived in little bubbles until they were reunited. Did Paige ever have a boyfriend, or even a sexual experience? And on that note, did Zach? There was a lot of focus on the teenage sex aspect of what happened between them (or rather, didn’t quite happen), and it was really…odd reading memories of sexual experiences from the perspective of an adult. These people haven’t seen each other since they were about 18 years old, and the torch is still burning as brightly? I had a hard time swallowing it. C+

Tempt Me by Alexis Grant
Anita, or Queen B, is an R&B star with a reputation and a stalker. She hires professionals to take care of her security on her USO tour, and ends up having the major hots for her head of security. You may be wondering why I haven’t mentioned his name…wonder no more. I can’t remember it. There was A LOT going on in this story, probably way to much. The guy who originally was supposed to be Anita’s bodyguard ended up being ill, his army buddy steps in to pick up the slack while on leave, Anita and the actual bodyguard both came from the projects, Anita’s brothers and father are sponging off her, her ex-boyfriend is a Tommy Mottola-like figure…the list of stuff happening goes on and on. Yet, there is quite a bit of time spent on scenes that just shouldn’t have been that much a part of the action.

While both the H/H came from the projects and had tough lives, their conversations or interactions just didn’t raise my temperature, and it felt like they were barely raising each others’. My biggest problem? I didn’t fully get the who-did-what-to-whom at the end, which was incredibly annoying. C-

Love Me ‘Til Death by Lorie O’Claire

Homicide detective Ashley Jones is working on a murder case that seems to be a single event. When FBI special agent Chase Reed shows up on the scene, Ashley immediately begins to suspect that the case is more than it appears.

Chase is on leave for breaking FBI rules, ignoring protocol and generally acting like a caveman. No surprise, he continues to break rules, ignore protocol and grunt at Ashley. Ashley seemed to be a capable and smart woman but when Chase shows up and essentially takes over her case, she morphs into a brainless jellyfish. Her lack of actual police work was annoying and wardrobe choices would do a hooker proud. The one thing that really bothered me: WHERE ARE THE DAMN CONDOMS? There is nothing less sexy than an STD, and that’s all I kept thinking about whenever they had sex. D

This is a mass market paperback published by Macmillan, part of the Agency 5

→ Shuzluva
Previous article: REVIEW: Virgin on Her Wedding Night by Lynne Graham
Next Post: Who’s at The Center of Romance, the Hero or Heroine?