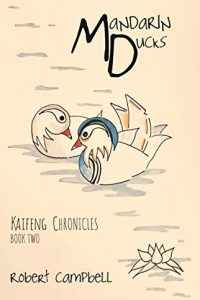 In late autumn 1630, Li Bing prepares to depart for Beijing to write the metropolitan examinations. Before he goes, he learns more about his heritage from his maternal grandfather and hopes to marry his childhood sweetheart Xiaoyun. However, political intrigue between his father and hers has the potential to derail more than just his marriage.

Having seen young Li Bing through his initial provincial examinations and through his betrothal to the daughter of vice-prefect of the city, I wanted to see what would happen next. There are a few other threads to the plot of this novella, one of which was begun in “18 Cranes,” while I had suspicions regarding a character from that book and what he might be up to.

This series is more historical fiction than anything else. And just as some things included in the fist story were tied to Ming Dynasty China, here the mention of Mandarin Ducks is used in relation to the soon to be married couple. But first an investigation is begun based on the accusations of the bride’s father against the father of the groom. As various officials look into what Xiaoyun’s father has lobbed at his fellow vice-prefect, webs of intrigue are revealed along with some unsavory practices. Beyond lying about Li Gong and accusing him of taking bribes, Xiaoyun’s father indulges in what is revealed as sexual predation of a young boy.

Following along with the investigation, we get to learn the layers of government and officials of Ming era China and details of how the vice-prefects worked and earned a little extra on the side – which was expected! I would have enjoyed learning more about young Xiaoyun’s preparations for her wedding but this plot point was just one of the many here including her intended – Li Bing – learning more of his centuries old foreign heritage. I’m eager to see what lies ahead in his continued studies in the capital, his new marriage, and how he will learn more about the Jewish religion. B