REVIEW: Making Up by Lucy Parker 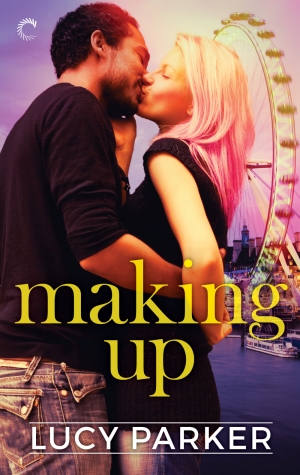 Unlike your previous two books in the London Celebrity series, Making Up‘s hero isn’t a grumpy bastard. Sure, Leo Magasiva and Beatrix “Trix” Lane don’t get along at first but it’s not because of Leo’s temperament. He’s not a demanding primo uomo (that’s the male equivalent of a prima donna – I looked it up) or a temperamental director. He’s a bit of a teddy bear actually. He’s also a talented makeup artist/special effects expert. Trix is an actress/singer/dancer/aerialist in a Cirque du Soleil-style production in the West End.  She’s one of those amazing people who are super flexible and extremely strong and make doing stunning feats of strength and control look effortless and graceful. (Basically, she’s the physical opposite of me.)

After a disaster involving an allergic reaction to a moody actor who didn’t disclose said allergy, Leo is in the tabloids for all the wrong reasons. He needs a job while he comes up with a new plan to break into film makeup/effects. He takes a temporary role with The Festival of Masks, the production in which Trix has been working for two years.

Around the same time, the actress who plays the lead role of Doralina has a fall and breaks her arm and suddenly Trix is elevated from second understudy to lead performer. Trix is terrified. Her confidence has taken a significant body blow since her disastrous relationship with Dan the Dickhead (he appeared briefly in Pretty Face) He was emotionally abusive and manipulative (and therefore some readers may find the storyline triggering) and Trix feels like she’s lost herself. It’s been a year since they split but she doesn’t trust her own judgement or abilities anymore.

Leo and Trix went to high school together. They were becoming close when something happened to ruin everything and in the decade or so since then, they have been deeply at odds. Unfortunately, they bump into each other fairly often because they share some common friends and work in the same industry.

Their usual style was to cross paths, cross swords, and then cross their fingers that it was a long time before they saw each other again. Spending time under the same roof never did much for their respective blood pressure.

Both Trix and Leo snipe at one another, letting rip with sarcastic and biting comments, constantly trying to one-up each other. But when Leo witnesses Trix in mid-panic attack in the alley behind the theatre, he cannot not help and an uneasy truce is established. This is especially helpful because the production has subsidised accommodation for the cast and crew and the spare bedroom in the apartment Trix shares with two others has just been filled – by Leo. I have no idea how likely this scenario might be in real life but it worked for me because I do like some forced proximity to shake things up.

Leo is looking after his sister’s pet pygmy hedgehog. That’s right. A pygmy hedgehog. He’s adorable and now I want one. That Leo cares so well for this tiny prickly creature is something of a metaphor for the main relationship actually because Trix is small (he call’s her Tinker Bell for a reason and it’s not just her pink hair) and very prickly indeed. Leo realises his true feelings for Trix well before she does. She is still traumatised by her experience with Dan the Dickhead and lacks the confidence in her decision-making to commit to anything more than casual. At least, that’s what she tells herself when things go from the enemies part to the lovers part. There is nothing casual about Trix and Leo, even from the start. But sometimes one needs to lie to oneself to get moving.

Leo is protective, a little jealous of one of Trix’s co-performers (he takes full responsibility for it and realises it’s his problem and totally in his own head not based in real life and he undertakes to work on it – and he does) and, around Trix at least, he can be prickly himself. He’s not perfect. But he is generally softer and more in touch with his emotions than either Richard Troy or Luc Savage.

In amongst the snark and sarcasm there is plenty of humour. It is scattered throughout the dialogue and the text, humanising the characters and keeping them from tipping into unlikable territory.

If anyone ever asked, Trix could now say with some authority that choking on hot tea and having it retract up her nasal passages was extremely painful.

The sex between Leo and Trix is about as flexible as you’d expect given Leo’s strength and size and Trix’s acrobatic training. (Although not quite as acrobatic as I’ve seen in Sex and the City.)

There was also something suspended from a ceiling beam that looked like a sex swing, but because life was full of disappointments, he suspected it was exercise equipment.

It is also both steamy and meaningful. There is even some bad sex later in the book when things are getting tense between them. It’s okay though – there’s good sex again a bit later.

She fisted her hands against the back of his head, scrabbling for a hold in his hair. Her “Fuck!” was strangled. “All those years that I kind of hoped you’d lose your tongue in an unfortunate incident that would leave you unable to speak ever again,” she managed to squeak out, “I take it all back. Tragic waste. I was short-sighted and didn’t think it through.”

Trix’s journey is about regaining her confidence and sense of equilibrium. The linkage here to her job is obvious; her physical ability is never in question. I liked how it worked out. She was not fixed by the power of true love. And the decision they make together to have their HEA is quite deliberate and very romantic in its way. Entirely satisfying.

Leo’s sister, Cat, takes over the book in places and she’s a difficult character to like for much (if not all) of the book. I had mixed feelings about her.

The conflict between Trix and Leo is more about them and where they are in their lives. It’s authentic but it’s more internal than in your previous London Celebrities books. While I enjoyed Act Like It and Pretty Face better, Making Up was a very enjoyable read and one I expect will be even better the second time around.