Warning – this is an epic review. And by epic, I mean long. And also full of terms like “joy juice” “muff” and “spunk.” 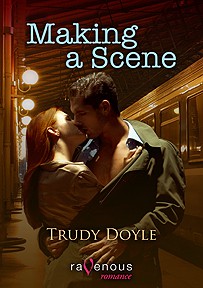 Thank you for sending me your book for review. I obviously have had some concerns about the quality of books that are being issued by Ravenous Romance given my last encounter, but it would be unfair of me to tar the entire catalog by the same Ladyfingered brush without exploring more of the RR catalog. This is going to be a good news/bad news post. I’ll give you the good news in the first paragraph. I thought this book was indeed better than Knight Moves.

The bad news is that the rest of the review will not contain any more “good news” kernels.   Making a Scene is told in the first person present tense from the point of view of the female protagonist, a writer of cliched detective stories, three of which have made it onto the extended New York Times bestseller list.   Her agent is in the midst of negotiating a film rights deal but the film people want the relationship in the next book to be spiced up.

"Nevertheless," Consuelo said briskly, her cultured voice snapping, "in her own crudely descriptive way, Renee’s absolutely right. It’s essential for the protagonists to rise to the next level if we want to make this series more commercially viable. Frankly, Pamela, in addition to the movie interest, we’ve even been discussing franchise – product endorsements, video games, podcasts – the possibilities are endless. So it’s absolutely to our benefit – to your benefit – that we take the creative initiative. Sex sells, Pamela, and you’re ready to take off with this. This is your big chance. Run with it."

Pamela Flynn is given 1 week to write a really hot sex scene for her detective duo. Who knew that detective novels with sex had that kind of marketing potential.   I hope Nora gets a new agent because I’ve yet to see an Eve/Roarke product endorsement, video game, or the huge money maker – podcasts.

For some reason, I’m supposed to feel badly, or even perhaps outraged, that Pamela’s live in slave is having sex with someone else.   After all, in exchange for rent-free space, Josh is allowed to keep her happy.

At the time I just felt sorry for the poor, struggling grad student, so for the past two months, as a trade-off for rent, I let him keep me sated, fed and focused while I wrote. He’d clean my apartment and wash my clothes, in between attending master’s classes at the University of Pennsylvania and pouring drinks part time at a local bar two blocks over.

That Pamela, she’s a winner and a sexually inexperienced one at that because while she watches Josh, the houseboy, sex it up with her friend, Karen, she’s surprised at some of Karen’s moves:

I watched, breathless, as Josh’s ass tightened and relaxed, the muscles of his sleek back rippling with each thrust, his balls lightly tapping her chin until she sucked one at a time into her mouth. Good golly! I thought – she put me to shame; I never thought of doing that.

In any event, because Josh was insulting to Pamela after Pamela had hauled off and cracked him hard enough across the face to bend his glasses, she is now unable to put fingers to keys to type out a sex scene for her dashing pair of detectives.

I call it a supposed romance story because much of the story consists of Pamela sitting in Roark, the main male protagonist’s, coffee shop for two days before Roark decides he is in love with her. Roark and Pamela eventually have lots of sex in an effort to drive houseboy out of Pamela’s mind and unblock her writing.   Fortunately, for Pamela, Roark   comes well equipped.   So well equipped that she is chafed after bouts of sex.   Also she is filled to the brim with spunk. Oily spunk at that.

I slip my fingers into me and imagine it’s Roark, his mouth on mine, his hands kneading my breasts, and suddenly I’m coming, the last of his spunk oiling my fingers and sliding me home.

I admit to being surprised at the number of fantasy, self pleasuring scenes there were in the book. I would say that the scenes of Pamela by herself getting off were about 2:1 with her having any physical contact with Roarke.   As referenced earlier, many of the sex scenes are fantasies that Pamela has watching random people at the coffee shop or ones that she entertains whilst self pleasuring.

In further scenes of WTF-ery,   Pamela fantasizes about Roark disrobing, peeing, flushing, showing his flaccid cock, and the rolling over and going to sleep. That’s the fantasy! Peeing and going to sleep! Actually the fantasy is much more detailed. I’m probably doing it a disservice. Pamela fantasizes about Roarke coming home, about him taking off his socks, throwing them into the hamper, going into the bathroom “where he takes a piss and flushes.” Note, her fantasy does not include the washing of hands post flushing. Does no one at Ravenous care about hygiene?

Moving on. This book is long; over 180 pages and most of it is given over to inane detail about nothing. Like why do I have to attend Pam’s Pap Smear appointment with her? What is the point of that?

She taps the inside of my thigh, something she can do when she’s got a speculum up my crotch.
…
She stands up, pressing down on my abdomen, her other hand inside me as she feels around. "Okay, everything’s where it should be. You can sit up."

….I yank my feet out of the stirrups and gather the paper gown around me.

It’s not like a woman’s gyno appointment is so fantastic that we want to read about it detail for detail in some book. There are just things a woman should not be subjected to in erotic romance. Along those lines, I don’t need time lapse imaging of her getting shaved. Her nether regions transform from being a “bush” to “reduced muff” to “newly trimmed muff.” I get to read about Roarke “gathering a hank” and “gliding the razor over the top of my bush like clipping a hedge.” Later, her genitals are referred to as an “Afro”. No, I am not making this up.

And when I’m thoroughly sudsy, my pussy a big castile Afro, my tits two cup sizes bigger with foam, he uses me as his own bar of soap, sliding into my ’Fro to whistle-clean his big cock,

The sexy euphemisms do not stop with bush and muff. No way, we get extra helpings of “jiz” “spunk” “joy juice” and descriptions like “my crotch juicy with heat”, “lowering the shiny globule [of KY jelly] to my crotch”

And I love the post coital blow by blow descriptions:

I pop out my diaphragm, wash it and give it a reload, smiling the whole time. Damn, if this piece of latex isn’t becoming a part of my anatomy. I brush, pee and poof, inching out of the bathroom.

I appreciate that as the narrator we are supposed to identify with her, but I don’t need to know her so well, that I am serving as her f-ing gynecologist or her best friend although even best friends should be kind enough to keep the details of their paps to themselves.

I twittered that this book might have been passable if all the sex scenes were removed.   Like the ones in Knight Moves, these scenes were at best antisceptic and boring (fantasizing about the flaccid cock) to gross (globule of KY Jelly) and to ridiculous (when she fantasizes about a couple having sex with food and the male says “Darling, brace yourself. I do believe we’re ready for the meat course.”)

There were moments of decent writing.   Some of the later sex scenes involving Roark and Pamela weren’t all bad, on sliding scale of badness.   Some of the dialogue, when it wasn’t cheesy or cliched, read with authenticity.   However, the lack of a realistic plot, the failure to have any kind of connection between the two protagonists, the bad sex scenes, and the  very poor editing leaves me with a negative impression. D.

This book can be purchased in ebook and audio format from Ravenous Romance. I left out a choice scene in which the heroine plays “ping pong” with the balls of the hero. I could only fit so much into this epic review.