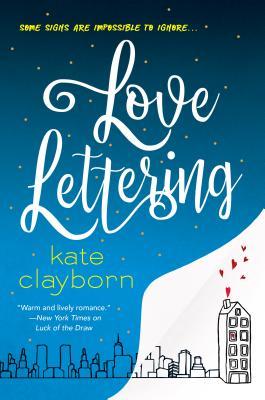 I have a feeling I might be a bit of an outlier in this but it took me a little while to get into Love Lettering.  Meg Mackworth, known as “the Planner of Park Slope” hand letters planners and journals for clients. I didn’t even know that was a thing. But then, I’m not much into planners or journals (*cue gasps of horror from at least half of the DA readership*). She used to do wedding stationery but stopped after it became unsatisfying for her.

A previous client, Reid Sutherland, comes to see her one day to ask her about the hidden message she left in the wedding program she designed for he and his then-bride-to-be, Avery. Avery attended most of the consultations with Meg alone but on one occasion Reid went along as well. That was where the wedding program was designed. Reid and Avery did not end up getting married and it is clear to Reid, from the message Meg left, that she knew the relationship was doomed. He wants to know why.

That makes sense but then Reid explains that the breakup was amicable and that the relationship ended with more of a whimper than a bang. Neither party had deep feelings for the other. Reid did not get his heart broken.

So I didn’t really understand why he felt it was so important to know what Meg saw. It’s not like she saw something that he did not and as a result was blindsided by a betrayal for example. The latter is what I thought the set up was going to be but it wasn’t. I just didn’t quite buy what brought Meg and Reid together. And, perhaps my moral compass is askew because I didn’t really understand why Meg felt so guilty for the message she left in the program. It was so well hidden it was only going to be someone like Reid, who is a quantitative analyst (aka a “quant”) for a big firm on Wall Street (owned, as it happens by Avery’s dad). Reid is very into codes and puzzles and, I suspect, he was looking. It’s not like he broke up with Avery because he saw the message Meg had left.

Meg is preparing for a big proposal to a stationery company who are interested in producing a line of designer planners. She is one of three invited to apply. But she’s blocked and not feeling creative. Meg is also, for some reason, distressed that Reid hates living in New York. That combined with her lingering guilt over the wedding program, lead her to invite Reid to “play a game” with her. They will wander around New York and spot signs designed to inspire Meg’s creativity and in the process, hopefully, inspire a love of New York in Reid.

Not a lot of that worked for me. I didn’t quite understand why the pair started to spend time together in the first place. I was happy they did but I had to do some mental hand-waving as to the how and why of it.

However, once Reid and Meg did start hanging out I began to get into the story. I enjoyed Meg and Reid getting to know one another. The book is also a bit of an ode to New York and I liked the strong sense of place of the novel as well.

The story, unlike your Chance of a Lifetime series, is told in first person present. There is no POV from Reid. I admit I missed that. For some reason, I found the perspective somewhat distancing rather than intimate. Perhaps that was just me  missing the other main character’s internal thoughts. However, given what transpires later in the book I can see why giving Reid a POV in the book wouldn’t have worked/would have changed the story you wanted to tell.

The story is full of subtext and code, as both Reid and Meg struggle with various problems they’re dealing with. As Meg is the only POV character, she is the one readers get to know best but at first she is opaque too – part of her arc is learning to be more direct and to ask for what she wants, to say what she thinks. Not to hide her feelings and thoughts in coded messages. She begins the book mourning the loss of a deep friendship. She and her roommate Sybil (“Sibby”) have grown apart and while Meg can identify it, she is completely baffled as to why. But there has been no confrontation or conversation. The friendship is disintegrating and Meg is a bystander.  As the book progresses, Meg makes decisions to go after what she wants and to fight for her relationships and her career in a more open way. Once these things started I began to understand Meg a lot better. Up until then, she had been largely hidden from me. Perhaps this, too, resulted in me taking a little while to “crack the code” of the book.

At no stage did I dislike Love Lettering. But at first I did feel disconnected and found the book easy to put down. Still, there were things which drew me back. Meg’s sense of humour was one  of the main things.

“He’s brilliant. He can do the kind of math that seems unbelievable.”
“Huh,” I say, not acknowledging that I’m pretty unsure about what qualifies as “unbelievable” math. Long division, probably.

(I also feel the same way about maths that Meg does.)

Once Reid and Meg started to talk to one another, to spend time together and slowly, ever so slowly, edge toward a romantic relationship, I became invested in the story. I began then, too, to appreciate more the broader relationships in the book – the ones between Meg and her colleagues at the shop where she works on a contract basis from time to time, with a new client, Lark, and with Sibby.  I loved the scenes where Meg and Reid went to his family’s place and the glimpse into Reid’s childhood.

I loved the way Reid pays attention and isn’t fazed by things like periods (the menstrual kind). I loved how he wasn’t afraid to let Meg guide him (in fact, he actively encouraged it) when they commenced their sexual relationship, in order for her to be comfortable and have orgasms.

I didn’t see a few of the things which happened later in the book coming but they were all there, laid out and planned. I didn’t feel like I had failed in this; I’m pretty sure you intended it to be a surprise.

I loved how you dealt with it. I loved the letter.

I hope DA readers will take my word for it; the second half (or perhaps, two thirds) of the book won me over and my feelings at the end were very positive. Given I didn’t start that way, I think that says something.