You sent me Fatal Force a while back and I enjoyed it.  When Love at First Flight was available on Amazon for free, I snapped it up.  I waffled between whether I should review a book I got for free but I figured that no one would object if I positively reviewed a book I received for free and thus the reverse should be true.  As you have stated previously, you are selling all kinds of books and this book has a number of positive reviews so my opinion is likely an outlier.  Having stated, that there is little I liked about this book. 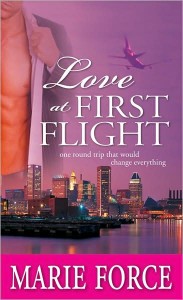 This book starts out with hairdresser Juliana and Baltimore City State’s Assistant Attorney Michael sharing the same flight to Florida.  Juliana is on her way to see her boyfriend of ten years.  She is hoping for a proposal.  Michael is on his way to see his fiancee where he will attend a party for the two of them given by her family.  Michael is going to be trying a case against the Bendetti brothers the following week, probably the biggest trial of his life.

Michael, despite being engaged, is turned on by Juliana’s spicy scent. He can barely manage to refrain from leaning closer for a stonger sniff.  He reminds himself “he is a grown man and not a hormonal teenager” and settles with just staring and flirting with her.  How about reminding himself that he has a fiancee and just read his case files?

The opening of the book pretty much sets the stage and tone for the book.  Both characters fall quickly out of love with their respective partners.  Of course, the break up is the fault of the partners, not of the main characters but first we  are treated to two separate sex scenes Juliana and Michael enjoy with their SOs, good sex.  We see them declaring their love for each other.  Yet, Michael wants to just run away and get married and when his fiance refuses to do this, he breaks it off with her.  Juliana discovers that her boyfriend wants to marry her but that he also thinks about other women even though he has never acted on his impure thoughts. Juliana says that they should take a three month break from one another.

I have to ask, why did we need the sex scenes? Why did we need the proclamations of love for the other partner?  This didn’t make Michael and Juliana’s love more romantic.  Instead it made me wonder at the constancy of their feelings.  This concern was further encouraged when Max and Juliana realize that they’ve been with the wrong people on the return flight and start “seeing” each other almost immediately upon deplaning.  Less than a week later, Michael professes his love for Juliana and wants to marry her.

And while Juliana is being romanced by Michael she is becoming enraged when Jeremy (her boyfriend) writes to her that he went out to dinner with another woman but all he could think of was Juliana and how he doesn’t want to be on break anymore. The fact that Jeremy went to dinner with another woman was infidelity in Juliana’s mind, no matter that she is virtually living with Michael (for her own safety, of course) and kissing him passionately and accepting Michael’s proclamations of feelings toward her and ultimately having sex with Michael. Not only that but Michael is soon proposing to her and Juliana is wearing his ring (which she hides when her ex shows back up).

The attempt at showing Juliana as confused and torn between two men wasn’t quite believable because Juliana didn’t seem conflicted about her feelings. Instead she turned to one man when she was mad at the other.  That isn’t conflict. That’s immaturity. Michael’s not much better. He’s a real ass to his fiancee and in order to make this acceptable, this girl who hasn’t been with any other person than Michael, is turned into a shrew. It seemed so clearly authorial manipulation that it didn’t wipe Michael’s slate clean for me. If anything it made me like him less perhaps because his behavior literally drove this chick nuts.

Finally, I have to lodge a complaint against the realism of the law as presented in this book.  I wonder how much research you did because when Michael and Juliana get back to Baltimore he takes her WITH HIM to see his star witness who is in WITNESS PROTECTION based on the fact that his “gut” tells him he can trust her. He spent a round trip plane ride with her and brings her to see a witness whose secrecy is paramount? Or how about the court scene where the IMPARTIAL JUDGE admonishes the defense to not do any more violence against Michael or Juliana because the judge will be determining their sentence? There’s a provision in the criminal justice system whereby an accused is “innocent until proven guilty”. It’s only the very basis of our criminal legal system and to have a judge making allegations against one side would be grounds for an immediate mistrial. This sort of obvious mistakes just makes my heart hurt.

“This is an outrage.” He turned to address the defense team.  “I want you to tell your clients that I’ll tolerate no further harassment of Mr. Maguire or any other member of the prosecution team.  You might want to remind them of who’ll be determining their sentence should they be convicted.  Am I clear?”

“Be careful . The defendants are already facing three consecutive life sentences. I have absolutely nothing worse than that to threaten them with, and they know it.”

In the end, this is not a book I found convincing on any level. Well, maybe I was convinced the beautiful Juliana could give a good haircut. But the romance, the plot, the suspense? None of it was authentic. And the characters? So unlikeable. D.