The books which make up this series have been favorites of mine for years. First published in the late 1990s, they’ve also been out of print for about that long so I was delighted to notice them among the Harlequin Treasury reissues. I hope that this will allow more people to try them and enjoy them as much as I do. 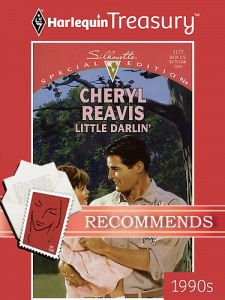 Corey Madsen really doesn’t want to take the foster child who social worker Lou Kurian needs to temporarily place. She and her minister husband used to foster children but since his death she hasn’t had the energy or heart for it. But Lou isn’t the kind of woman who takes “no” for an answer and Corey finds herself agreeing to foster the unknown named little girl for “just a few days.”

Shorty, as she quickly comes to be known, was left in supposed father Staff Sergeant Matt Beltran’s red Corvette by her supposed mother, a Bragg Boulevard strip club dancer, though Beltran denies all knowledge of her. But remember Lou won’t accept anyone’s “no” and Beltran is no exception. There must be some reason Rita Warren left her little girl in his car and Lou is going to sweetly hound him until he does his duty.

Matt honestly had no idea he’d fathered a child but the more he thinks about it, the more he can’t be exactly 100% sure he didn’t. There was that one night he went to a club looking to get drunk after the death of a friend so maybe….But regardless of that, he’s on active duty in the 82nd Airborne with no backup plan for a 14 month old child. Lou’s “few days” end up being weeks for Corey to bond with and fall in love with Shorty though she has her doubts about the way Lou’s attempting to force Matt to fatherhood. Still the tough jump master is coming around, meeting with Shorty and doing very well with her.

When Rita appears on the scene again, hiring a lawyer and making noises about custody, Corey can’t bear the thought of the little girl reverting back to the dirty, ill clothed, mistrustful child she was. But since Matt is an orphan himself, how can they keep this from happening? A marriage of convenience, that’s how. But can these two who think they’re polar opposites come together and create a family for Shorty? And what will happen if, despite all their efforts, they don’t get custody?

I’m not usually a fan of secret baby books but this takes the trope, twists it and still allows Matt to be a sympathetic character. Matt isn’t perfect by any means nor does he try and hide this. He went to a strip club, got drunk and had sex with this woman. He was hurting over his buddy’s death but he still acted like a dick.Yes, Shorty is a secret to Matt but Rita has never made any move to either tell him or hide her from him. She’s just never told him anything or contacted him in any way and since they only had a one night drunken stand, he’s never had any reason to think he fathered a child.

And when he is finally told, it’s by having the child dumped in his Corvette. Of course he’s going to be pissed and unwilling to believe in it since he’s never had an inkling that Shorty/Olivia exists. And now he’s got social services breathing down his neck over this. But he’s also a decent guy under it all and can’t seem to put it out of his life or mind. Still, he doesn’t push for full custody because of his single status and job in the military where he can and is sent away at a moment’s notice with no clue as to when he’ll get back. Guy like, he’s content to let things ride until Rita appears again and then he agrees to Corey’s proposal which blind sides him. All this makes Matt real to me. When he finally comes to terms with his role in all this, he steps up, mans up and thinks of his daughter first.

Corey isn’t hot to get involved in this in the first place either. She’s got her issues and is still grieving for her husband Jacob but does the right thing for Olivia. She’s also as wary of Matt as he is of her. He doesn’t disappoint her initial expectations of him – low as they are. Yet as she gets to know him, she revises her opinion upwards based on the man he shows himself to be. Though when she proposes the marriage of convenience, it’s for Shorty’s sake rather than because she loves Matt. She thinks she’s already had her great love marriage but she feels that she and Matt can make it work. She does know what she’s getting into when she makes the proposal and doesn’t seem to have any starry eyed notions of changing Matt or that they’ll fall deeply in love. However she’s also more than willing to have this be a real marriage instead of in name only. She is physically as attracted to Matt as he is to her and doesn’t hide the fact.

When Matt tells Corey that he’s loved her since he got mad at her one day when her grief for Jacob caused her to drive recklessly it makes a strange kind of sense to me. He doesn’t come right out and say he loves her, instead he gets upset because he’s worried about her and it’s his actions which say it. His next move is to spend time with Shorty before he’s even sure she’s his daughter just because he wants to and not to impress Corey. He’s also concerned that she really wants Shorty in her life given how Social Services initially pressed her into duty. It’s just the way Matt is – taking care of those who depend on him. And yeah, the bit of jealousy he shows when he sees another man interested in Corey does help clarify his thinking a little.

Corey doesn’t start by falling for Matt. Her progression to “I love this man” comes gradually as she gets to know him and is boosted by her growing respect for him as a person and by the way he does right by Olivia. She’s brutally honest with him when she says she’s marrying him to get custody of Olivia. But after she does begin to fall for him, she’s honest with him about that too. She does start looking in the direction of martyrdom at the end but thankfully you pulled the story back from that with Matt’s no nonsense “what’s going on here?” request for clarification.

I enjoyed the realistic view of military life. It’s his job and Matt’s good at it but he knows it will make life rough for Corey and Olivia and is honest about this. It’s also got its share paperwork, hassles, overseas duty and asshole fellow NCOs. but the cooperation he gets from his subordinates speaks well of his leadership and organizational abilities – how good he is at what he does and is supposed to do and that’s lead people and get the job done. The book also shows how the military can intrude into Matt’s private life as well as jerk around his professional one. And I like that you don’t gloss over the realities of how many soldiers spend their off duty hours – at strip clubs and getting drunk – but also don’t dwell on them. It is what it is. The wedding coordination scene is hysterically funny too. Hoo-ah!

Rita acts as a dea ex machina to get Corey and Matt united together. And the threat she poses is real since Social Services would probably give her back her baby should she make the effort – but she still doesn’t have her act together enough for that to be the right thing for Shorty. The main part of the book ends with this issue still unresolved – which has a realistic air to it – though in the epilogue it’s clearly almost settled. I think it’s enough for the people who don’t want to go on to read the next book in the series though I would advise that just because “The Long Way Home” is such a wonderful book.

I hope that readers don’t let the title make them gag and swear to never read it. I enjoy your books and this is another winner. The wedding scene alone is worth the read. Go Airborne! The ending seemed just a touch rushed and there was a teensy Little Mis which took the book down to a B for me but all in all it’s a wonderful read and not too goo-goo baby sweet.