REVIEW: Like No Other Lover by Julie Anne Long 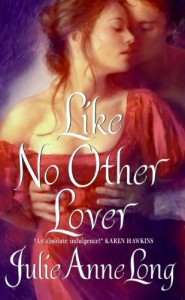 You have been one of the most reliable of historical romance authors for me for the past several years, during a time when historical romances were a bit scarce and their charms had begun to pall a little. I have read five of your previous six books (omitting only To Love a Thief), and my grades included two A-, a B, a B- and a C+. The lower of these grades does not reflect the fact that even the more average of your books have a charm and a verve that I truly appreciate.

Your latest is loosely connected to your last book, The Perils of Pleasure – the hero of this book is Miles Redmond, of the family that are age old nemeses and country neighbors of the Everseas (the hero of TPOP was Colin Eversea). Several characters were introduced in this book who led me to believe that we will be seeing more of the Redmonds and the Everseas in the future.

Miles Redmond is a scientist and naturalist, recently returned from an expedition to Lacao (I’m not sure if that is supposed to be a real place or not. Googling brings up an Isle Lacao in Chile, but it seems fairly obscure, and the book refers to Lacao being in the South Seas, which even this geography idiot knows Chile is not). He has returned to England, hoping to cadge funds for a new expedition from his stern father. In the village tavern, he encounters his sister Violet (irrepressible and minxish, Violet seems a likely candidate for a book of her own at some point) in the company of one Cynthia Brightly.

Cynthia and Miles have a history, though Cynthia is herself not aware of it. At a ball several years earlier, Miles had spotted Cynthia and fallen quickly and uncharacteristically into a strong infatuation with her. Before he could introduce himself, however, he overheard Cynthia chattering about the wealth of various prospective suitors, and then making disparaging remarks about Miles himself. Why should she "settle for a dour second son", when she believes she can snag an heir, perhaps even an earl?

So, when Miles comes across Cynthia at the Pig & Thistle, he is none too pleased. Even less so when he realizes that Cynthia Brightly has come to stay for a house party his parents have planned, and that his parents have been called away on family business, leaving Miles as the host. Miles is also concerned because he realizes that Cynthia’s presence in the country means that some scandal has forced her from London.

Cynthia Brightly is in dire straits. If she doesn’t find a husband at this house party, she’ll be forced to travel to Northumberland and accept employment as a companion to the odious Mrs. Mundi-Dickson. Actually, Cynthia hasn’t even been offered that position yet; if she doesn’t find a husband or get offered a position with Mrs. Mundi-Dickson, her circumstances look even worse.

Cynthia has looks and charm, though, and she knows it. She sets her sights on Miles Redmond immediately; her standards are a lot lower than they were at their previous almost-meeting. But, of course, Miles is on to her, and anyway, he has been set the task of pursuing another woman; if he marries Lady Georgiana her father may very well fund his next expedition.

Miles, to his own surprise as much as Cynthia’s, offers her a deal: a kiss in exchange for useful information on the eligible men attending the house party. Cynthia accepts, and it will come as no surprise to romance readers that the kiss ends up being more than either of them bargained for.

But bargain they did, and a deal is a deal. Cynthia begins pursuing Lord Milthorpe, an older bachelor whose main interests are hunting and dogs, in earnest. She also has her eye on Lord Argosy, who has the advantage of being younger and more attractive, if a bit more callow, than her other potential suitor.

The plot of Like No Other Lover is quite simple. There are no spies running around or secrets to uncover – just a house party with various characters (another, Lady Middlebough, is trying to arrange a liaison with Miles) interacting with each other. This is both the strength and the weakness of the book. I appreciated the focus on the characters and the simplicity of the story. But for it to really work, the characterizations need to be really strong, and that’s where I think Like No Other Lover falls a bit short. Miles is an appealing, if somewhat familiar, hero – the bespectacled scientific type (though he apparently does all right with women; Miles is not quite a Nerd Hero). Cynthia is rather more unique – here is a heroine who is fairly unrepentantly mercenary in her pursuit of a husband. She has made some mistakes that lead to her fall from grace in London. I really liked the way that Cynthia’s situation was handled – she is not depicted as a martyr. Thankfully, she doesn’t have a blind sister, a couple of young brothers, or a ragtag band of child pickpockets that she has to provide for. Cynthia has herself, and she’s looking out for herself. She wants a nice life. She doesn’t WANT to have to go to Northumberland and be a companion to odious Mrs. Mundi-Dickson. Who would? At the same time, when Miles comes to realize that Cynthia’s behavior is motivated by true desperation, he tells her that what she is doing is wrong. She is trying to make men believe she has fallen in love with them, and that is wrong, even if her motives are understandable. I liked the way that conflict was delineated. Cynthia is not presented as being awful or immoral for her behavior, but at the same time she is behaving in a less than admirable way, and she needs to realize it. Still, it’s an emotional moment when Miles understands what’s at stake for Cynthia:

She was breathing heavier now. "This is not a game." Her voice was shaking a little.

She flew at him before he could dodge and thumped one of her fists against his chest. "It’s not a game for me!"

"It’s not a game." She hit him again. A good one. The third time she tried it, he captured her hands and held her fast, and it was like holding a trapped wild creature. She was remarkably strong for someone so small.

"You-You with your money and your bloody grandeur and your family and history. It’s all very well for you and Violet to play at romance. It will be all right in the end, of course. But I’ve none of that. None. I’ve no one. And you’ve gone and played dice with my future. Why shouldn’t I have what Violet will have? What you will have so easily? Why shouldn’t I?"

Sometimes I think that the plot of a romance is just there to distract me from what I know to be the inevitable HEA. How successful the distraction is determines how successful the book is. Often times in historical romance, the distraction involves spies and plots, but since I set out to read a romance, not a spy thriller, this does not usually work for me. Ideally, the distraction comes in the way of believable conflict and gorgeous prose. The conflict in Like No Other Lover was believable enough, but it just wasn’t totally strong enough to divert me from the predictable conclusion. Nor was the prose, though excellent in parts, enough to entirely distract me. The characterization wasn’t novel or deep enough to distract me.

That doesn’t mean that this was not a well-written, pleasant book; it was. The interactions between the hero and heroine had a lot of charm and sexual tension. I liked that they recognized their love for each other well before the end; I get sick of self-deluding heroes and heroines.

All in all, if Like No Other Lover does not transcend the boundaries of the genre, it is a better than average example of a historical romance. My grade: B.

→ Jennie
Previous article: Oprah Seal of Approval for the Kindle and What It Means for eBooks
Next Post: Doc Turtle Reads a Harlequin