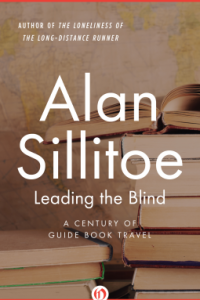 A journey into nineteenth-century travel guides to the UK, Europe, and Soviet Union as researched and written by one of England’s most distinguished authors.

In this quirky and illuminating social history, bestselling British author Alan Sillitoe culls fascinating details from Victorian-era guidebooks and travelogues in order to recount the pleasures, dangers, traps, and delights of travel in the century leading up to World War I. For instance, in Switzerland, an English officer once fell into a bears’ den and was “torn in pieces.” In Paris, the outdoor seating at cafés was in “unpleasant proximity to the gutters.” In Germany and the Rhine, the denominations marked on coins did not necessarily indicate their value. And in Northern Italy, a traveler could look forward to a paradise of citron and myrtle, palms and cyclamen.

For the armchair traveler journeying into a bygone era, Sillitoe begins with the essential practicalities relevant to any tourist: the price of passports and visas, how best to clear customs, and how many bags to pack. He includes timeless advice, such as: Board a boat on an empty stomach if you are prone to seasickness, and always break in your boots before embarking on a trip. Anachronistic recommendations abound as well: It is best to leave your servant at home, carry your milk with you when traveling to small Italian villages, and not pay children and “donkey women” for flowers.

From convalescent hotels in the South of France to malaria-ridden marshes between Rome and Naples, and from the chaos of Sicily and southern Italy to the dazzling bullfights and rampant thieves of sunny Spain, Sillitoe guides readers through the minutiae of the Mediterranean with wit and historical insight. Then he takes an anecdote-filled road east into Greece, Egypt, the Holy Lands, Turkey, and Russia. Of course, the Grand Tour would not be complete without a thorough account of his home turf of England, with her idiosyncratic hamlets, smoke-filled skies, and working-class townsfolk in high-buckled shoes.

At once a fascinating history of travel books from 1815 to 1914 and an entertaining ode to wanderlust, Leading the Blind brings to life the absurd and profound wonders of Victorian globetrotting. With simple but captivating prose, Sillitoe also shows how the way we view foreign lands can reveal a lot about what is happening at home.

So many characters in romance novels travel through historic Europe and of course who could forget (Poor) Cousin Charlotte and Lucy with their Baedeker guide for Florence in “Room with a View.” This book examines the time and age when English travel through the Continent began to shift from the wealthy traveler to the tourist of modest means tramping through the sites with book in hand – complete with asterisks so nothing of major importance is missed.

One must first yield with as much grace as possible to the demand to carry a passport. After that, a good pair of shooting boots (already broken in) – for all the walking to be done – is in order. For the cross channel voyage there are handy phrases – expressed in four languages – to convey the degree of sea sickness one is feeling. “I am very much inclined to vomit” and “Drink some Gin: it will strengthen your stomach, and you will feel relieved” being among them.

The channel crossing is only the beginning of the British traveler’s woes. Apparently having one’s luggage pawed by customs agents is an age old complaint about which one is not allowed to complain. The state of hotels, collection of passports, dinner manners, relaxed dining, and abundance of cafes in France arouse considerable fervor – both good and bad – as well as some pompous moralizing by these bygone guidebooks. Once again phrase books came to the rescue with possible things one might need to say while being driven to Paris. “If you drive well, and behave yourself civilly, I shall give you something for drink-money.” Alas the handbooks also lamented the fact that many English were not that popular on the Continent by being “ill-conditioned” or inadvertently parsimonious.

Then on to Paris where the British traveler is cautioned that some of the entertainments are hardly suitable for well-bred ladies while various French upheavals abounded in living memories. But oh, the food. One could spend months there and not touch all the wonders to be seen and done.

One discovers that in Switzerland each canton had its own currency and the inns were a mixed lot – at least until later in the century when money was standardized and innkeepers had realized stunning mountain views didn’t make up for lousy food. Of course there were always locals ready to try and relieve a tourist of his money by ruthless yodeling or blasting one in the ear with an Alpine horn. Travelers are reminded to always leave donations at the Great St. Bernard Hospice – no mention of any dogs though. Then as now, the smart person is one who packs little and lightly while admonishments via cautionary tales are offered for those attempting to climb the mountains.

The guidebooks waxed rhapsodically about German spas which the populace thought “essential to existence” from the Royals down to the tradesmen and their wives. Apparently this was the meet and greet networking center of 19th century German lives with everything from treaties to marriages negotiated there. One author reproached the German Licensed Gaming-Houses as places of disgrace and shame warning English travelers to be especially on guard against sharpers haunting them.

On arriving in Italy, travels were warned of the thoroughness of customs inspections – but really this was everywhere – along with the fact that anyone tempted to carry firearms in defense of life or belongings risked having revolvers confiscated. My goodness. Englishmen were told that here as everywhere, they were liable to be charged higher prices than other nationalities and the wise people brought not only their own tea but a metal teapot as well. One luxurious eight volume set of books on Italy urged the use of horse drawn transport to fully savor the views rather than rushing in on noisy trains. Another point in Italy’s favor is the overall courtesy and kindness often extended to even strangers. A cheery smile and friendly look will win almost anything.

One writer called Neapolitan pizza a “horrible condiment.” This chapter begins to describe some of the comments made about the pitiful condition of animals in Naples during the 19th century which I, frankly, skipped. Condemn me for that if you must but once images are in my head, I can’t get them out and I am tender hearted about animals. The gentle traveler is gently warned of nature of some of the wall mosaics and paintings on display at the ruins of Pompeii – ladies might need to avert their eyes or skip these all together. The brigands of southern Italy and the recitation of the gruesome fates they condemned some prisoners to was also skipped by me. But I guess guidebooks would want to steer tourists clear of the area because of the horrific deeds done.

One author “does not genuflect to any tenets of ‘political correctness’” when writing his guidebook about touring Spain especially in discussing the character and manner of the Spanish people. Then he begins in on politics, beggars, naughty paintings, bull fighting and the making then smoking of cigars. Tourist vandals defacing or destroying historic buildings isn’t new to us as he laments the morons who are desecrating the Alhambra. However most of this early guide is as prejudiced as well as prejudicial – something thankfully avoided in other, later editions.

On the way east, one then travels through Austria which gets high marks for everything, Bohemia is described as “wretched’ and the cities of Hungary could rival London and Paris – that is until an uprising in 1850 had been ruthlessly put down. As with most locales, mosquitoes are both prevalent and ferocious. Hungarians were said to almost surpass Americans in the filthy habit of spitting.

The Eastern traveler was advised to kit himself out with a cotton umbrella, tinted glasses for the glare and should never be without a small bottle of quinine pills against malaria. Also to avoid the fruit. While journeying through Greece, the natural courtesy of the populace towards foreigners would remind one of his Homer – and reminds me of a Mary Stewart novel. The removal/looting (pick your verb) of Athenian treasures is tartly mentioned in Baedeker though the Germans come in for strong censure over the looting of Troy and excavation of Pergamon.

Egypt ought to arouse a desire in scholars to see her ancient wonders though some useful items to carry along are washing tubs, flags, guns, pistols and a rat trap for boats. Those choosing to bathe in the Nile should be wary of crocodiles if near sandbanks. Ugly stereotyping rears its head again when discussing Egyptians’ demands for “bakshish.” Tourists come in for a lecture though and are enjoined not to toss money for the purposes of witnessing the scramble for coins as it is degrading. Also the practice of travelers requiring torches for visits to the ancient tombs is frowned on due to the smoke damage done and warnings are issued in regard to fake antiquities.

The patronizing and at times demeaning tone of the guidebooks about the natives continues into the Holy Land. If this is the attitude displayed by visitors, it’s no wonder they met with less than fulsome welcomes.

Fittingly, the book wraps up with tour book guides for England. There are quite a few written by English authors but a dearth of foreign views. Yet of the ones written, it’s amusing how the same complaints leveled at the Continent – being mobbed by would-be luggage porters and guides as well as less than amazing food and the dirty cities (near collieries) are found there. One haunting book was due to be published in late 1914 with an eye towards extolling Britain as a vacation spot for Frenchmen. Alas, the Great War put the kibosh on that.

For the most part, these guides appear to have been written for the middle to upper class traveler. The frequent references to gentlemen and ladies clues you in but it’s nailed when mention is made of sailing in your own yacht around the Greek isles. For a peek at this bygone era, this book is fascinating but beware Sillitoe doesn’t skimp on mentioning the bad as well as the good. B