Most of your writing works well for me so it probably comes as no surprise that this is one of my favorite historicals published this month.  In the foothills of Sierra Nevada, the year 1850, two miners come upon the remains of a wagon train and in amongst a pile of rocks, they find a young girl clutching a tin of Dr. Eli Kennedy’s Comfort Lozenges.  They take her with them and end up keeping her for twenty years. Comfort, as they call her, ends up being the best thing that happened to Newton Prescott and Tucker Jones.  Deciding that mining wasn’t a way to make a living, they begin to offer banking services and miners feel that a father figure must be trustworthy.  Twenty years later, Comfort Kennedy is the heir to a banking fortune and her good friend Bram DeLong decides to take advantage of this by announcing their engagement at his brother’s birthday party.  Bram and Comfort have been long time friends but Bram’s precipitous announcement places that friendship in jeopardy. 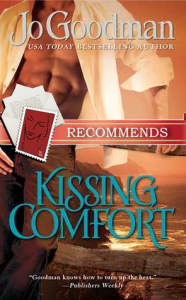 Comfort has never received a proposal to Bram.  Comfort has always had strong feelings for Bram but he is flighty and unreliable and no matter how much her romantic heart might yearn for an attachment with Bram this announcement shows how little care Bram has for her and her pragmatic side acknowledges that Bram will never be the partner in life she seeks.

Bode, or Beareguard De Long (Beau DeLong became Bode), is the eldest of the two DeLong brothers. Ostensibly they own a profitable shipping company, but the truth is that the now dead patriarch of the DeLong ran the shipping company aground and the DeLong fortunes rely upon the public appearance of wealth while Bode attempts to save the company.   He loves the shipping company, has strong feelings about his dead father, tolerates his mother, and while he loves his brother, Bram, he recognizes Bram’s faults. Oh, and he’s held a secret torch for Comfort for years.

Comfort is surprised to learn both that Bode has had feelings for her. In fact, both Bram and Comfort are taken aback by Bram. As Bram points out, Comfort always leaves the room when Bode comes in:

“I’m certain I will talk to her, but not about you.  I’m going to throw my hat in the ring, Bram.  I thought it was fair to let you know.”

“Throw your hat in the ring?  Fight me for her, you mean?”  He looked down at himself and then at Bode.  “How is that fair?”

“I hope it won’t come to a fight.  I recognize you’re at a disadvantage, but I know you’re not helpless.  You never are.”

Bram pushed himself as upright as he was able.  “She won’t have you, Bode.  You scare her.  You always have.  It can’t have escaped your notice that when you walk into a room, she walks out.”

“Oh, I’ve noticed.”  Bode dropped his feet to the floor and rose from his chair.  Favoring his brother with a faint but consciously shrewd smile, he buttoned his jacket.  “You’re so used to women showing interest in a particular and obvious way that you don’t know that some of them reveal it in another.”

“Wait!” Bram called after Bode as he started to leave.  “What are you saying?”

Rather than the two characters having distinct character arcs moving the story forward, the romance is the main attraction bolstered by the threat to Comfort’s life as well as the removal of that threat. The story also has a strong family subtext. Comfort’s family was created but solid and loving where as Bode’s family life was outwardly normal but inside the family home doors it was beset with a father throwing their future away on the war for the South, Bode going off to fight for the North, a feckless brother, and a mother more interested in appearances that support. The contrasts were interesting.

Part of the story takes place on one of the ships of Bode’s family and I much preferred the story when it was land locked. I enjoyed the time spent in Comfort’s home and her bank; the shipping offices; and the DeLong home. I felt some of the period feel slipped away on the ship.

There are two main problems with this story.  The first is connected to Comfort’s past.  I thought that the connection of the past to the present stretched believability to the snapping point. I wished that part of the story had actually just been left out.  It was simply too convenient and lacked the polish the rest of the story presented.  Second, I adored Comfort’s dads but I actually wished the two were a gay couple instead of two men who had outside interests.  I struggled to believe that neither man would marry out of respect for Comfort even though one of them had a long time attachment to another woman.  However, these two things did not mar my enjoyment of the romance. I thought both Comfort and Bode were lovely and closed the book with a feeling of satisfaction. B.

→ Jane
Previous article: What Jayne is reading/watching at the end of August
Next Post: REVIEW: The Shattering by Karen Healey