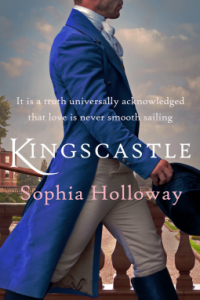 Captain William Hawksmoor of the Royal Navy never expected to inherit Kingscastle and finds himself all at sea when he does so. Especially when he learns that he must marry within a year or be forever dealing with trustees.

As the new Marquis of Athelney, the captain takes command of Kingscastle and discovers much to be done to set it in order. He must also contend with his aunt, Lady Willoughby Hawksmoor, who is determined that her daughter will be his wife. When she discovers he is far more interested in Eleanor Burgess, her underpaid and much put-upon companion, Lady Willoughby shows she will stop at nothing to keep them apart.

The striking cover caught my eye first – glory be but here’s one that doesn’t have a model with his or her clothes falling off. Plus the clothes that are (in place) actually look period. Huzzah.

William Hawksmoor might never have thought he would inherit the family title as he is the second son of a second son but we all know how deadly the Regency period could be and it is especially so when our hero needs to inherit. Thus he finds himself the new Marquis. He also discovers that due to the wild behavior of the previous heir (his older cousin), there is a part of the will that says that unless he marries and produces an heir within two years, he will remain beholden to the trustees for any money to work on estate issues. I have no idea if this was possible or not and in romance novels I’ve almost given up even worrying about it at this point.

When faced with an elderly steward who needs to retire, Athelney (as he is mostly called for the rest of the book) turns to his former Lieutenant Harry Bitten to help him. Nothing can help Athelney with his harridan of an Aunt. Lady Willoughby Hawksmoor (known by her husband’s first name as she was merely an Honorable before marriage) is a beast – there, I’ve said it. She’s horrible from the get-go and only gets worse. Another person she treats with contempt is Eleanor whose mother is Lady Hawksmoor’s cousin. Put upon paid companion Eleanor lives in misery with Charlotte, Lady Hawksmoor’s daughter who has lived a lifetime under her mother’s tyranny.

Athelney soon catches onto the fact that his Aunt intends him to marry Charlotte but though he likes his cousin, it is Eleanor’s intelligence and strength – her capableness – that are more to his liking. Toss in a friendly vicar and his unflappable sister along with a raging flood through the village and – voila – Kingscastle.

Even though there are actually two romances in the book, the feel of it is more a historical fiction rather than a romance. It’s very period, there is no sex, just holding a loved one’s hand is thrilling, and wow the MC ought to have considered the source when taking comments about another person to heart. I had thought that there would be more tension around the terms of the will but frankly this soon faded into the background and wasn’t referred to very much.

One thing that I liked is that even though Athelney proposes to Eleanor fairly quickly, he is honest about not having fallen in love with her then and she is honest in not expecting it. Her main reason for refusing him though, is that she doesn’t feel herself equal to his new rank and doesn’t want to be thought of as an encroaching woman-on-the-make. After that, sadly, these two allow the poisoned words of someone they should realize doesn’t have their best interests at heart to direct their behavior. There are some other reasons given but sheesh, I wanted to shake Eleanor especially. Athelney maintains his cool but Eleanor often descends into peevishness and would cut her nose off to spite her face.

I found myself enjoying the other romance far more. Harry Bitton is an honest, hardworking man who is determined to give good value for his salary. He takes his responsibilities seriously and is delighted to discover in the vicar an old friend from his school days. In Anne Greenham, Harry finds the delight of his heart. Anne is sweet but also capable and proves herself worthy of heroine status. Harry is so overcome with self doubt that he is deserving of her that it takes the combined effort of Athelney resorting to sounding like a post captain on his quarterdeck and the vicar exasperatingly giving his blessing to reach a charming proposal scene.

Another nice aspect to the story is how Athelney takes to his new status. He is no mere gadabout Lord but someone who is determined to learn his new duties and who views them seriously. When he is fed certain misinformation, he also never changes his view of Eleanor either unlike some romance heroes I’ve read. Kudos that the servants and villagers are written as real people with concerns rather than just mere shadowy background figures.

I wish I had liked the main romance more but here it is the “secondary” one that carries the story. There were hints of a possible third relationship brewing – that ultimately led nowhere – which I wished had reached fruition. I did heave a sigh of relief that there weren’t historical errors or at least none that I noticed. This is the first Holloway book I’ve read but I will be keeping my eye open for more. B-