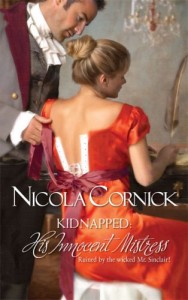 This is the first of your books that I’ve read, and when I began reading it last week, I couldn’t remember why I had been interested enough to pick it up, since I’m not hugely adventurous when it comes to new-to-me authors, and I haven’t had very good luck with the Harlequin Historical line. Likely it was the suggestion in the title of a mistress story; I’m always up for a good mistress story. Though the heroine never actually is a mistress, of the hero or anyone else in the course of the book, Kidnapped: His Innocent Mistress ended up being an unusual and worthwhile read.

The story opens with our heroine, Catriona Balfour, at the graveside service for her recently deceased father. She is 18 years old, an only child, and now, a penniless orphan, her mother having died several months before. Catriona had lived her whole life with her loving and indulgent parents in the Scottish highlands (brain to self: "Wait, this is a Scottish romance? At the first Sassenach or dinna, I am so out of here". Self to brain: "Oh, shut up. You loved Outlander". Luckily, this wasn’t "that" type of Scottish romance). As a schoolmaster’s daughter, Catriona has had more than her share of education, but in 1802 Scotland, that is not going to do her much good. She has no relatives and thus no prospective saviors to take her in.

Or so she thinks. At her father’s wake, Catriona encounters Neil Sinclair, of His Majesty’s Navy and heir to the Earl of Strathconan. Neil has come to escort Catriona to her uncle’s home in Glen Clair, as the uncle, her father’s brother, has agreed to take her in.

Neil and Catriona clash immediately, but she quickly realizes that she has few alternatives, and she reluctantly agrees to leave the only home she’s ever known and journey with him to Glen Clair and the relatives she never knew existed. The first leg of the journey is chaperoned by the minister’s wife, but that does not deter Neil from making an improper proposal to Catriona, one that she naturally (and indignantly) turns down.

Catriona has been warned that though her ancestral family home was once a great estate, the Balfours backed the wrong side in the Jacobite uprising some 60 years before, and are now "as poor as church mice". Still, upon her arrival (an arrival delayed by a mysterious run-in with smugglers on the road), she discovers that things are much worse than she could have imagined. Not only is the family manse crumbling due to the Balfours’ poverty, but it is clear that her uncle has been neglectful and has essentially run the place into the ground. Catriona’s cousin, Ellen, is beautiful and sweet, but ineffectual. Ellen’s mother is an invalid who uses her imaginary ailments to control her daughter. And Uncle Ebeneezer is a menacing, drunken brute.

Kidnapped: His Innocent Mistress has a lot going on in a relatively short book. The section at Glen Clair is only part of the story, and from there Catriona is catapulted into a number of adventures that repeatedly bring her into contact with Neil, whom she both disdains and desires.

What I liked about this book: first of all, I am a fan of the first person voice when it’s done well, and it really was done well here. I know that some readers miss seeing the hero’s POV, but I believe that you are giving up something to get something – ideally, a greater sense of identification with and understanding of the heroine. When a heroine is charming and likable, as Catriona is, it’s an exchange I don’t mind making.

On the surface, there is nothing that really sets Catriona apart as a romance heroine. Insecure about her looks (especially in the company of the beauteous Ellen), overeducated for the era, and drawn to a hero she can’t decide if she wants to kiss or kill. It’s all stuff the average romance reader has seen before, many times. Yet the characterization of Catriona is what makes the book. She has quirks and idiosyncrasies that make her come alive as a heroine. She admits several times that she never loses her appetite, no matter what the circumstances. She is not money-grubbing but she acknowledges to herself on several occasions that she wouldn’t mind if some money dropped into her lap. She has jealousies and insecurities and she reacts in a refreshingly sensible way in certain situations where many a romance heroine has been known to turn into a total bird-brain. One example: when Catriona and Neil get a little too romantic, he puts a stop to it to preserve her chastity. Catriona is torn because she loves and wants him, but she also is cognizant of the dangers of giving herself outside of marriage and the social ruin she might face. Similarly, when she does come to the realization that she loves Neil, they are in a dangerous situation, and she is able to consciously remind herself that however in love she is, she has more important things to concentrate on at that moment (i.e. getting them out of peril, which Catriona aids in admirably, even if she doesn’t quite do it single-handedly).

I did not find Neil nearly as compelling as Catriona, though I did like the way he was portrayed near the end – many a romance hero acts badly because he is "afraid of love", but I believed it much more in this book than I usually do; it didn’t feel cliché.

What keeps this book from getting a higher grade for me: the prose was just okay, in my prose-picky opinion. In some ways, since it was first person narrative, having the "voice" be a little less polished and sophisticated made sense, but I love beautiful prose and I didn’t really find it in Kidnapped: His Innocent Mistress. The plot, while fast-paced, had some holes that didn’t bear too close scrutiny; for instance, the hero is in danger from some rather Keystone Kop-like villains who conveniently wait to dispose of him just long enough for the hero and heroine to come up with a plan to save themselves. The villains in general were just not given enough page time to make their idiosyncrasies interesting; instead they appeared sort of inconsistent and wishy-washy.

Still, the good definitely outweighs the bad in this book, and I was so pleasantly surprised to find that Kidnapped: His Innocent Mistress was different – I give a lot of points for different unless a book is complete dreck in every other way. My grade is a B, and I will be checking out your backlist.