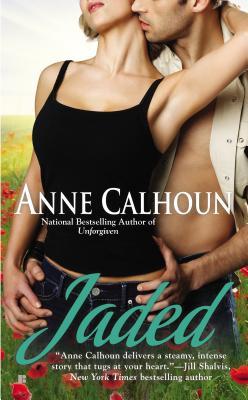 “Nice job with the presentation,” he said. “You made a library sound both necessary and really exciting.”

“Libraries are both necessary and really exciting,” she said. “To me, anyway.”

The sequel to Unforgiven (reviewed here by Dabney,) Jaded is a story about discovering and rediscovering passion. The title refers to Lucas Ridgeway, the burned out and emotionally distant Chief of Police of Walkers Ford, South Dakota. But Alana Wentworth is also in need of discovering her passions, and of giving herself permission to have them.

Researcher Alana took the job of interim library director in Walkers Ford after an embarrassing public proposal. Always feeling a bit of the ugly duckling in her famous political family, she’s spent much of her life going with the flow — until the flow suddenly included marriage to a man she was mostly dating from inertia. Now her time in Walkers Ford is almost up, and she wants to make the most of it by having a fling with her landlord, Lucas. Somehow she believes this will teach her how to deal with men and let her “go home different”: …she wasn’t going home the same person she was when she’d left. That would make this nothing more than wound-licking hibernation, not a tactical reinvention.

But the interim job keeps getting extended, as Alana becomes more and more involved with renovating the library as a true community center. And her attachment — to Lucas, to others in town, to her work — only grows, leaving her torn. Wentworths are trained to think globally, not locally, and her responsibilities lie elsewhere… don’t they?

At first I thought I’d made a mistake requesting this, because stories about city slickers realizing life is so much better in a small town… I’d say I was so over them, but I was never under them. But slowly, this won me over. What first grabbed me was the emphasis on the importance of libraries, most sweetly expressed through the character of Cody, a poor, desperate teenaged boy who’s sentenced to community service at the library and flourishes there:

the whimsical, wistful version of Walkers Ford was visible in the picture to anyone who knew the town… But all motion swirled subtly to the center of the drawing: the library. Alana’s heart seized when she saw the picture, realized the story Cody was using art and passion and feeling to tell. This is the center of our town. Not the restaurants or the shops of the administrative buildings. This place we need to commit to, or we’ll lose our center.

On a cheekier note, there’s a deliciously evocative sex scene in the library, in which Alana slyly plays into librarian fantasies:

Without turning around, she turned the books spine out and examined the labels. Behind her Lucas stood quietly. She thought about her skirt and cashmere cardigan over a silk blouse. She even wore a strand of pearls and her brown suede heels. Moving very slowly, she selected the first two books from the stack and turned to shelve them.

Lucas was right behind her. She hadn’t heard him move, not a rustle of denim over the beating of her heart. He leaned his body weight against hers and swept aside her chin-length hair. It slithered back, obscuring the kiss he pressed into the skin between her collar and hairline….

His mouth worked over the sensitive patch on her nape, first hot and gentle, then with a scrape of his teeth.

Her hands trembled as she slid one book, then the second, into their proper places, and if she took a minute to double-, then triple-check to be sure they were correctly shelved, well she was a conscientious librarian.

I was also moved by Lucas’s difficult emotional thaw, as he begins to recognize feelings for the woman he has no actual claim on:

His. Except she wasn’t, or so his mind said. His body, as he stripped and got into the shower, said something entirely different. His body said he’d spent all day watching the woman in his bed laugh and talk with everyone but him.

He leaned his head against the tiled wall and let water course over his back. The strength of the emotion, jealousy and anger and a blood-hot lust, washed through him with an intensity that left him breathless. This wasn’t like him. Feeling this much. Caring so intensely about anyone, anything.

And now I remember why I stopped. It fucking hurts.

While Alana is finding her place in Walkers Ford, Lucas’s feelings for her help him to recover from the compassion fatigue that’s dogged him for years, and regain a sense of trust and optimism.

By the end of the story, I was convinced that this wasn’t yet another glorification of small towns but about people finding what happens to be right for them. The very positive portrayal of Alana’s sister Freddie, who happily fits right into their glamorous, jet-setting family, helped a lot, and the downsides of rural life are also honestly portrayed.

This stood alone pretty well, although the main characters from the previous book play a part so I slightly regretted not reading it first. More irksome for me was a lot of repetition in the text: Alana refers to herself and Lucas as “a cliche” numerous times, a lampshade I could have done without. There are other repetitions too: Lucas watched Tanya bite at her her nails and roam in and out of the lights like a moth attracted to the light. She was agitated, shaking, biting her nails. Later in this same scene, Lucas is confounded when Tanya, his cousin, mentions an incident from his past which no one is supposed to know about; she had already mentioned it to him earlier in the book. And this may be just a personal cultural disconnect, but I had an “oh please” moment when Lucas got all bent out of shape because someone had some pot.

But I loved the powerful feelings conveyed in the story, and the celebration of positive values. Love. Art. Community. And above all, libraries. B