Dashing and valiantly wounded, Captain John Gallows could have stepped straight out of an army recruitment poster. Leanne Sample can’t help being impressed–although the lovely Red Cross nurse tries to hide it. She knows better than to get attached to the daring captain who is only home to heal and help rally support for the war’s final push. As soon as he’s well enough, he’ll rush back to Europe, back to war–and far away from South Carolina and Leanne. But when an epidemic strikes close to home, John comes to realize what it truly means to be a hero–Leanne’s hero.

Ages ago, one of our readers (sorry, I’ve searched through our archives but can’t find the comment) recommended one of your books to me but it’s taken this long before I took her up on the rec. Sigh…I’m bad. Anyway, what finally got me going is the time period you use here. Lately we’ve had a lot of interest at DA in “Edwardian” and “WWI” books so, for me, “Homefront Hero” was perfectly timed. 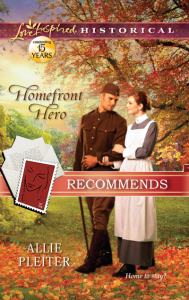 The story includes one thing I never thought I’d read about – knitting by men – and the 1918 influenza epidemic. Thinking back, the only other two books I recall with mass infection and death are an oldie from Paula Allardyce called “My Dear Miss Emma” that deals with the plague in 18th century Arles and the fantasy book “Warsworn” with its endless sweating disease. This flu is not exactly rainbows and fluffy bunny material but you make it work. After all, Leanne is a nurse, it is 1918 and it would be strange if this event wasn’t mentioned.

It’s smack in the middle of US involvement in WWI then the flu arrives yet the story is filled with humor. I wasn’t expecting this, to be honest. Most Inspies I’ve read have been more on the serious side so your sly wit caught me off balance. But it’s a good off balance, I liked it! This especially comes into play when General Barnes is desperately trying to come up with some way to punish John for going AWOL and staying on campus to face the flu to save Leane and John can’t come up with the type of glib excuse he used to anymore. The perfect solution presents itself and I totally believe it’s inspired (no pun intended) by God. Punishment by life in Washington, DC attending bureaucratic meetings and making speeches – it’s priceless.

Leanne’s initial reactions after meeting “big hero” John are a breath of fresh air. Leanne thinks he’s an arrogant stuck up officer and is determined to not fall for him as she’s sure so many other women already have. It’s a nice change that she doesn’t go all spastic and make a twat out of herself while sticking her nose up in the air in an effort to avoid and snub him. I’m getting so tired of heroines who suddenly can’t manage to put one foot in front of the other when they spot the hero they’re trying to get snooty about.

John reacts with that age old male drive to get a pretty woman to look at him. And that’s before Leane is tasked to teach him how to knit. You go girl with including a modern rage in a period correct way and leveling the romantic power playing field. I also like that Leanne sees John as he really is from almost the beginning without the light of hero worship blinding her. Sometimes he gets frustrated with his injuries and being sidelined and that’s before Leane has to teach him how to turn a sock heel. As a man of action used to getting his way and being athletic, his reactions to his limitations sound very realistic to me. His anger at how he’s being treated like a hero when his actions stemmed from simple self preservation vs the actions of those on the front line whom he considers to be the true heroes deserving of this praise also make sense.

So…the socks and knitting stuff is fun but, as I alluded to above, the book dips into some pretty serious stuff even before the discussions on religion. Leane learns the hard way about soldiers attempting to deal with post combat mental issues and the sad outcome makes the book seem more realistic. Then comes the flu.

Okay nothing pretty here but then it doesn’t sound like a walk through the park. Applause for not sugar coating anything yet still keeping the details from getting too icky. Most of the time I’m not looking for icky in a romance novel. Your descriptions also convey the terror, horror and helplessness everyone must have been feeling. I just hope we never see another pandemic like this again.

How the religious aspects of an inspirational are handled can keep me reading or cause me to call it a day. Leanne is already a very religious person so the inclusion of her faith in the book seems natural. I didn’t feel it was overdone or being jammed down my throat in an effort to convert me. As I mentioned in the review of “Her Rebel Heart,” I have an easier time reading historical inspies and since this is also a wartime setting, that helps too. Yet it’s not the war that convinces John but Leanne’s daily demonstrations of quiet faith during which she doesn’t attempt to harangue him towards God – and I so like that – plus the life or death situation they go through that gets the light to break through for him. I found his discovery of faith to be believable and again didn’t feel I was being preached at. The inclusion of some funny bits after the long, dark night helps as well.

Forgive me if I include a rant about the term “y’all.” If you’re going to use this Southern phrase, please do it correctly. It’s used when addressing more than one person or when talking to one person but in reference to multiple people. /end rant

When the story ends, I completely buy into John’s new found faith and the love that they finally admit they share. It’s a hard fought battle on both sides as they initially are attracted yet feel they have no romantic future but the transition is one I believe and that I enjoyed reading. B