Nobles, ladies, scholars, and merchants were the subjects of Hans Holbein the Younger (1497/98–1543), an inventive German artist best known for his dazzling portraits. Holbein developed his signature style in Basel and London amid a rich culture of erudition, self-definition, and love of luxury and wit before becoming court painter to Henry VIII. Accompanying the first major Holbein exhibition in the United States, this catalogue explores his vibrant visual and intellectual approach to personal identity. In addition to reproducing many of the artist’s painted and drawn portraits, this volume delves into his relationship with leading intellectuals, such as Erasmus of Rotterdam and Thomas More, as well as his contributions to publishing and book culture, meticulous inscriptions, and ingenious designs for jewels, hat badges, and other exquisite objects.

I find it almost impossible to imagine the court and times of Henry VIII without “seeing” them in terms of Holbein’s art. He painted so many of the portraits used as images of the age. It was his painting of Anne of Cleves that resulted in Henry’s fourth marriage, his painting of young Edward VII that makes me want to rip that hat off the baby’s head so he can play, his portrait of Henry VIII that shows us how the once handsome monarch had aged into the overbearing tyrant who could have two wives executed.

When I saw this publication which showcases the current exhibit of Holbein’s work, I quickly asked to review it. Yes, the wonderful photographs of the paintings have my fingers itching to reach out and stroke the lush fur trimmings, the sleek silk and satin, the rich velvet. But I learned a great deal about the little touches that Holbein used to show us who these sitters really were. Holbein was an accomplished painter who relied on his chalk sketches – often accompanied by little notes on colors to use. On many of the clothes worn by his sitters, we see what were briefly the status symbols of the age – hat badges for men and dress equivalents for women – which showed family crests. A noted calligrapher and draftsman, Holbein also added subtle descriptors to the paintings which then would have told viewers who and what these people were and did and now serve sometimes as clues that have allowed identification of some of the (once) unknown sitters. And yay thumbnail biographies of important people as well as a chronology of Holbein’s life are included. Getty Publications are always a treat for the eye and informative for the brain. B 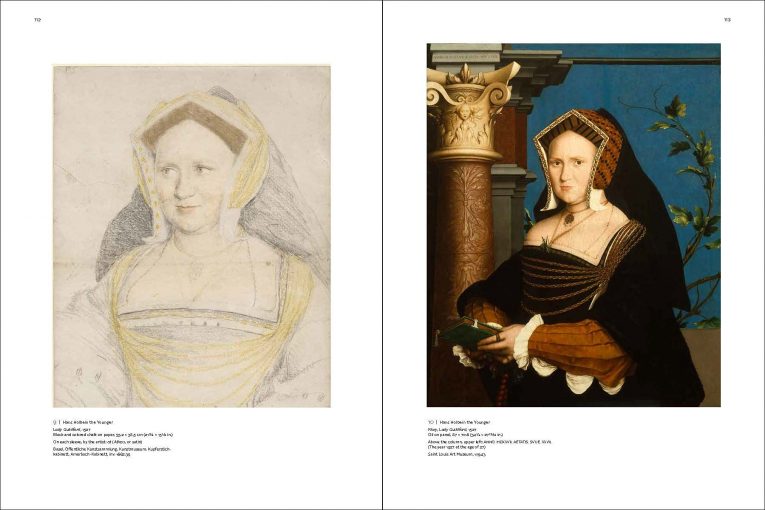