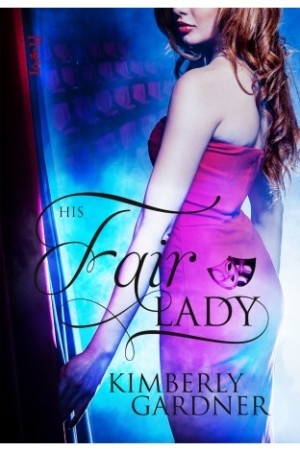 “Mark Talleo is something of a dog with the ladies. Any girl, anytime, anywhere is his motto until he meets Josie Frazier. The long lean redhead not only shares his love of musical theatre, but her smoky sexy voice and infectious laugh drive Mark wild and haunt his every step. Equally fascinating is his sense that she has a secret, one he is determined to uncover on his way to becoming her leading man.

Josie does have a secret, one she guards with her whole self. Although she has always known she was female, her name used to be Joey and she’s still biologically male. As much as she yearns for love and acceptance, her fear of rejection is just as strong.

Mark’s need to know the truth is matched only by Josie’s need to hide it. But when malicious gossip reveals her deepest secret the price of honesty may turn out to be too high to pay. But if each can accept that the woman he wants is the woman she is then at last he may find His Fair Lady.”

I’ll be honest and admit that the main reason I picked this book to try is because it has a transgender character. It’s not that I have any fetishes, I’m just trying to make sure our LGBTTQ reviews at DA actually have some characters who are BTTQ. To find any stories that delve into issues faced by this community is hard since I haven’t found that many being published. To find a nicely written one is a treat.

I liked Josie from the start. She’s smart, not easily bowled over when a hot guy asks her out and makes Mark work to get her attention and a date. So sure, a bit of this is because she’s got a secret and hasn’t dated much but a lot is due to some inner quality I sense in her that won’t accept second best or anyone only trying to see if he can get in her pants. My thoughts were validated later in the story when she verbally lets Mark have it after All Is Revealed and he panics. She does cry but only after a few choice shouted lines calling Mark on his cowardice.

Mark’s not too bad either but did notice that he’s really not the “dog” mentioned in the blurb. Perhaps I wouldn’t have taken to his character quite as much if he had been but the fact is that his only offense in this department seems to be not being firm enough in ending an almost over relationship. Once his attention is caught by Josie though, he’s a goner. He presses, retreats slightly so as not to be thought a stalker, makes sure Josie gets home, sees her to her door, calls her mother “ma’am,” and behaves as if someone raised him right. But he’s not unbelievable either given that his dorm room is a pit, he cheerfully calls his friend and roommate an asswipe, and would gladly get Josie into bed if she’s willing.

Josie’s anxieties and fears about revealing her gender are worked into the narrative without it seeming to flip on a neon “sign” stating ISSUES HERE! She takes care with her necklines and pulling her hair back from her throat, is silently grateful that her hormones will help her hide any erection she might get when things get hot and heavy with Mark, worries if a transgendered professor has realized her secret and has to face the fallout when her gender becomes known. And while this isn’t a “everything is genderly wonderful world,” it’s one that is perhaps more open since it takes place on a college campus, among theater arts majors, and with a hero who has a gay brother. I was watching to see how Josie’s and Mark’s parents were portrayed and was happy that this novella doesn’t have the disapproving families trope.

Perhaps all of the above mitigating factors smooth over the real dangers trans people face daily. Maybe Mark ends up being Super Boyfriend who is still sexually turned on by Josie despite the fact that she’s not planning on having gender reassignment surgery. But I enjoyed that the story focuses mainly on Josie and Mark and reaching their HFN – maybe HEA. B