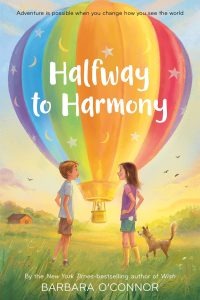 Walter Tipple is looking for adventure. He keeps having a dream that his big brother, Tank, appears before him and says, “Let’s you and me go see my world, little man.” But Tank went to the army and never came home, and Walter doesn’t know how to see the world without him.

Then he meets Posey, the brash new girl from next door, and an eccentric man named Banjo, who’s off on a bodacious adventure of his own. What follows is a summer of taking chances, becoming braver, and making friends?and maybe Walter can learn who he wants to be without the brother he always wanted to be like.

You have a wonderful knack of being able to put me in the mindset of ten year old schoolchildren as they work out the issues that bother, scare, or frustrate them. Here there’s humor, happiness, adventure, and new friends. There’s also Walter’s sadness, grief and, yes, anger at his adored big brother who left their home in Harmony to join the Army and never came back. Perhaps the adventurous summer in store for Walter will help him understand and put his feelings to rest.

Quiet Walter with his pigeon toes and lazy eye is not the outgoing center of attention his older brother was. Feisty Posey, the new girl next door, arrives and immediately begins to shake things up. Posey is confident in a way Walter doesn’t think he’d ever be, boldly striking out and discovering the third member of their summer trio. Banjo, or Jubilation T. Fairweather as he’s also known, is a balloonist who lost his balloon in the piney woods of Georgia beside the Chattahoochee River when he bailed out and it crash landed.

Banjo might be an eccentric, slick talker but he’s also an honorable man whose word is as good as gold. Soon Walter, Posey, and her three legged dog Porkchop are combing the woods searching for the balloon. Eventually Walter tells Posey about a recurring dream he has in which his brother arrives home during Walter’s birthday party and promises to show Walter his world if Walter can blow out all the candles. Walter idolized his brother but still hasn’t gotten over his anger that Tank didn’t come home on leave to say goodbye before going overseas. Now his momma is sad all the time and has cleaned out Tank’s room. Walter’s always wanted to be like Tank and maybe this adventure will be his chance to start.

Once again, I’m reading a book which shows as clear as day the turmoil, happiness, and just everyday life-ness of a ten year old. Things that would be important to them are presented the way they’d see them and think about them. Walter knows that his mother is sinking into grief but he’s also just ten years old and frustrated that his mother doesn’t seem to see his grief. He simultaneously longs for the home made macaroni and cheese she used to make (instead of the orange colored boxed stuff) and also wishes he knew the corny jokes Tank used to tell to make her smile.

As with  “Wish,” I loved seeing the two children forging a friendship that isn’t always smooth sailing. Walter sometimes doubts himself while Posey has more than a bit of (funny) snark to her. Banjo is both outrageous and funny to listen to. A thing that bothered me is that there is a conversation between Walter and his parents that I thought didn’t quite have the impact that it ought to have.The adventure just might be able to happen but even if it’s a touch exaggerated at times, it’s not too beyond the realm of possibility. This is a wonderful book to read out loud and the moment when Walter finally does see Tank’s world had me holding my breath and smiling. B

→ Jayne
Previous article: REVIEW: The Smallest Man by Frances Quinn
Next Post: REVIEW: The Book of Koli by M.R. Carey