REVIEW: Ghost of the Nile (The Gods of Egypt) by Veronica Scott 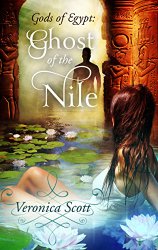 Betrayed, murdered, and buried without proper ceremony, Egyptian warrior Periseneb is doomed to roam the gray deserts of the dead as a ghost for all eternity.

But then the goddess of truth offers him a bargain: return to the world of the living as her champion for 30 days. If he completes his mission, he’ll be guaranteed entry into Paradise. Periseneb agrees to the bargain but, when he returns to the living world, two hundred years have passed and nothing is quite as he expected.

Neithamun is a woman fighting to hang onto her family’s estate against an unscrupulous nobleman who desires the land as well as the lady. All seems lost until a mysterious yet appealing ex-soldier, Periseneb, appears out of nowhere to help her fight off the noble’s repeated attacks.

Meanwhile, Periseneb’s thirty days are rushing by, and he’s powerless against the growing attraction between himself and Neithamun. But their love can never be. For his Fate is to return to the Afterlife, and Death cannot wed with Life…

Earlier in the year, I began reading some of your SFR books but noticed these ancient Egyptian ones. Jane and her tempting Daily Deals served this one up and I took the bait. With no expectations, I dove in and ended up enjoying it so much I’m eyeing the others now. A great deal of religion is woven into the story and brushing up on Egyptian thoughts on death and the Afterlife might be a good idea before starting. This is a story of not only humans who believe but in gods who actually appear.

Periseneb, a Shade condemned to eternal twilight because he wasn’t properly honored or mourned after his murder – man, Egyptian gods were tough – is given a chance to change that and gain judgment for his heart to move his immortal ka on in the Afterlife. The catch is that he must do a specific good deed. What, he doesn’t know but he jumps at the opportunity.

Meanwhile, Neithamun is trying to hold the fort in the face of the gods’ displeasure and a nasty neighbor when a stranger appears out of nowhere. She’s going to take all the help she can get from him. Never mind that she doesn’t know him from Ra’s housecat and freely shares all the family and estate woes straight off the bat. Either she’s very trusting of the fact that he wears Pharaoh’s badge and that he appeared right after she prayed to the gods again for help in her task of saving the manor or the thought that Periseneb might be working for the other side never crosses her mind. What she doesn’t know is that Periseneb knows this place, like the back of his hand, like the overseer of it he had been trained to be. Or that he can call on the Divine.

Periseneb is a thinking man. He fights when he has to but can also plan and take advantage of opportunities when they present themselves. He also subtly investigates the events of the intervening years from when he snuck off to join the army, then was murdered and now. Old issues still pain him and new clues are being revealed about a woman he thought he knew and loved. I’m adding the pieces together but is he? Neithamun is also a cautious, dedicated owner and manager of her estate. She isn’t given to hasty actions and thinks through her problems. Of course Neithamun & Periseneb are attracted to each other but more than that, they admire each other.

Neithamun growing more into her role of mistress of Heron Marsh. She’s thinking of the long term rather than just surviving this harvest time. Once she knows what’s actually happening with Periseneb – and that took some guts for her to keep digging for the truth given the Egyptians’ feelings about death – she asks intelligent questions about the greater goal.

Periseneb’s awkward compliments have the tone of a man unused to making them and unskilled in flattery. Neithamun realizes that Periseneb is the only man who believes in her ability to save her estate. Not even her long time neighbors and friends have much confidence in her abilities. That Periseneb does means a lot. The jump to intimacy makes sense once Periseneb explains his time limitations.

The plot quickly thickens and true motives and goals of traitors are unveiled. I don’t know enough about this time period to know how realistic the threats to the State are but it certainly sends shivers and anger through those who must now act to save the kingdom. Ma’at’s true reason for her actions is becoming clearer – and more dangerous to the humans tasked to carry it out. The cause for the Great Ones’ alarm is believable and grounded in reality. It’s kind of fun to be in a world where they really exist, even if they view humans as their pawns, and to see Egyptians’ faith in them is so strong.

The rousing finish roars into view, our heroes are fighting valiantly and then, well … here comes the Egyptian version of a deus ex machina. It’s like something out of Raiders of the Lost Ark! But wait … there’s more. Some truly eerie, awful stuff waits to give Periseneb & Neithamun one last gruesome obstacle to overcome. This really is freaky but even the Great One is impressed with how Periseneb whammies the enemy.

There’s Egypt and gods and magic and strong men and stronger women and love even beyond death and into the Afterlife. The historic details add spice throughout the story and these definitely aren’t 21st C people in linen kilts. Brush up on your Egyptian gods (make sure you know who Ammit is) and the Book of the Dead and you’ll be good to go. B