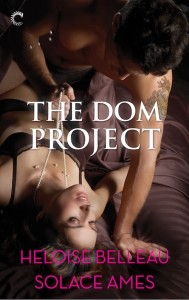 Solace Ames is a Japanese-American writer with roots in the Southeast US, although her heart lives somewhere along the Pacific coast of Mexico. She’s worked in restaurants, strip clubs, academia and the corporate world and studied everything from the philosophy of science to queer theory to medieval Spanish literature. Rejecting neat categories, her writing sprawls across genres and genders and swings from high art to low art, marching with the erotic avant-garde, tongue sometimes in cheek and at other times… well. Along with writing, education and political activism are her passions. Family takes up most of her time, but she loves to keep learning. 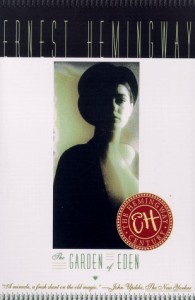 Title of Book: The Garden of Eden

I read The Garden of Eden not long after it was published—it was published posthumously, in 1986, long after Hemingway died. He’d worked on it intermittently between 1946 and 1961. I’d never been much of a Hemingway fan. Like everyone, I’d read “The Old Man and the Sea,” and I admired his prose style but was generally unmoved by his themes. A moping, melancholy sort of masculinity seemed to permeate his stuff. I don’t care about hunting, and don’t like reading about soldiers, either, if all they’re going to talk about is the manpain of soldiering.

I believe The Garden of Eden shows all of Hemingway’s strengths and turns his weaknesses into strengths. It’s an incredibly polarizing novel. Detractors say that this is a book where nothing happens. A woman gets a haircut, starts up a love triangle, there’s some eating and drinking and fucking and lots of arguing, then the woman goes crazy and runs off. Nobody fights in a war. There’s an elephant hunt, but it’s entirely metafictional, and serves mainly as a point for a boy (the man’s memoir-ized younger self) to yell out, “Fuck elephant hunting!” And then the narrative… ends.

Admirers, like me, will point to the uniqueness, the ambiguity, the sensuality.

First off, there’s no explicit sex whatsoever. Everything is told in allusion and suggestion. It’s an incredibly easy-to-read, fast-flowing novel, but it’s one that is not going to tell you exactly how the characters feel, or how they fuck. That makes it easy to miss things, and I missed a lot the first time around. Some of the most intense sex actually happens during the first thirty pages, when we meet David and Catherine on their honeymoon. Reading this a long time ago, I was aware some sort of role reversal goes on. Catherine goes to town, gets a man’s haircut, and announces she has become a boy. That night, she tells her husband that she’s going to “take him,” and does something to him, though I was totally confused as to the details. Was she getting on top of him?

He lay there and felt something and then her hand holding him and searching lower and he helped with his hands and then lay back in the dark and did not think at all and only felt the weight and the strangeness inside and she said, “Now you can’t tell who is who can you?”

So let’s call The Garden of Eden psychological erotica. Aesthetic erotica. In modern terms, we’ve got genderswitching, a possibly genderqueer character in Catherine, D/s powerplay, MFF menage, light incest roleplay (Catherine pressures David into dying her hair the same color as his, and they pretend they’re brothers at several points).

Catherine metaphysically genders herself male. She’s the destroyer; he’s the creator. As a writer, he stands in for Hemingway. I won’t go so far as to call him a Gary Stu, but damn, the parallels are pretty obvious. The whole Mediterranean trip, he’s working on two separate writing projects: “the stories,” which are stereotypical Hemingway (a boy on an elephant hunt in Africa ponders his relationship to a wounded elephant, his Great White Hunter father and his servile black porter) and “the narrative”, an account of his increasingly complicated relationship with his gender-variant, mentally ill wife, and how they take another woman lover. Gendered male writing versus female writing. Catherine hates “the stories” but loves “the narrative”, because in the later part of the book she’s presented as utterly narcissistic and un-nurturing of his creative energy. She wants to control him, which is exciting sexually but creatively impossible and tragic.

In the very beginning, while the book is still predominantly playful:

“I have these flashes of intuition,” he said. “I’m the inventive type.”

“I’m the destructive type,” she said. “And I’m going to destroy you. They’ll put a plaque up on the wall of the building outside the room. I’m going to wake up in the night and do something to you that you’ve never heard of or imagined. I was going to last night but I was too sleepy.”

The main problem with framing this as an erotic novel is that it doesn’t lend itself to an single sexualized perspective. It’s written by (I presume) a straight man and the POV character is a straight man (although we might call him heteroflexible at certain points) but the audience isn’t really straight men. I’ve read high-flown books like that, and this isn’t it. I don’t know what the audience is; I doubt Hemingway knew either. It’s very much about gender and genderplay, but it’s not really centered on female sexuality, and it leaves a lot of women readers cold. One reason is that the sex and love isn’t very female-positive or even sex-positive. And it’s definitely not queer-positive. There’s a space of freedom and of punishment, and the two are never entirely separated, either in geographic space or in character’s minds. It’s entirely possible to read this as a reactionary message in which being queer will drive you crazy.

But then, it’s written in such a way that it’s also easy to ignore that message! That’s the beauty of the style. And the style is beautiful—absolutely stunning and gorgeous. David almost never has interior monologues, and when he does, they’re a few sentences that assume an especially potent meaning because of the rarity. His speech is unconsidered, curt, frequently petulant, often witty. Character express emotions entirely opaque to themselves. We travel through the Mediterranean Coast, savoring food and knocking back martinis and taking long swims and soaking in the sun until minds become plastic and receptive to new emotions and sensations, but we’re not told exactly what to feel. We have to decide ourselves. I love that freedom.

In the technical details, as a writer, I’m in awe. One of the keys to Hemingway’s style is his lack of clutter in modifiers. There are few adjectives or adverbs. He makes sentences new and strange by packing a lot of meaning in—of all places—the conjunctions. Long chains of ands, a fascinating but, an unexpected because: ”In the cafe he found the paper and ordered himself a fine à l’eau because he felt empty and hollow from making love.”

So! The passages of desire and sexual freedom are not chained to passages where norms are reinforced. Here’s an example:

‘Do you agree, Heiress? About perversion?’

‘I always thought it was overrated and silly,’ she said. ‘It’s only something girls do because they have nothing better.’

‘But one’s first time at anything is interesting,’ Catherine said.

‘Yes,’ David said. ‘But would you want to always talk about your first ride at Steeplechase Park or how you, yourself, personally soloed alone all by yourself in a plane absolutely away from the earth and up in the sky?’

‘I’m ashamed,’ said Catherine. ‘Look at me and see if I’m not ashamed.’

I shouldn’t have to point out that this is a deeply, deeply ambiguous condemnation.

The most disturbing element of the story is Catherine’s mental illness, which she herself links to her jealousy of David’s writing ability. She also begins to hold her money over him. His writing is hers, she claims, because he wrote it on her dime. This hit me hard as a 1950s female-character trope. It’s reminiscent of Mildred Pierce, a great book by James Cain, but one that’s also horrendously depressing in terms of limiting female sexuality and power. Mildred Pierce is a self-made older woman who takes an aristocratic lover on hard times, and she begins passing him money so he can support himself, and in doing so, unmans him. Because of her support, it’s presented as her own fault when he begins a relationship with her daughter. The greatest sin for a woman is not to have lesbian sex against her husband’s wishes (like Catherine) or obtain his dubious consent to feminize him and penetrate him (like Catherine)… it’s to flaunt her money. Her public power. That’s the truly unforgivable seizure of masculinity. Sigh.

But like I said, because of the style and because of the lack of a real ending, it’s possible to work around this, and to read the book as amazingly innovative for its time, and even for our time. If I wrote my own ending for the book, Catherine would take responsibility for her mental illness, come back to David and apologize for mistreating him and Marita. He’d stop acting so petulantly passive-aggressive and would embrace his inner sissy. And then Marita would actually develop a personality, instead of being a mouthpiece for whatever random psychosexual dynamic Hemingway rolled the dice for. They’d have an awesome jetsetting three-way relationship in which David would write anachronistically feminist erotica with Catherine’s financial support while Marita served them martinis, but then they’d all die of skin cancer because of their near-religious devotion to tanning (seriously, the tanning stuff freaked me out, I kept wanting to yell YOU PEOPLE ARE TOO WHITE FOR THAT OMG SPF MELANOMA at them).

The metafictional stuff in this book is also amazing. The way that David mirrors Hemingway, or is an eroticized wish-fulfillment feminized stand-in for Hemingway… I’m not really into psychologizing writers, but this narrative absolutely invites it, because Hemingway was always sort of a rock star kind of writer, playing on his public persona, and this is almost like him writing RPF of himself.

At one point in the book, David tells himself about writing, “If you don’t finish, nothing is worth a damn.” That’s so meta it hurts. Hemingway never finished it. It’s still damn good.

“You know, I liked the book. Has it done well?”

“It moved me very deeply,” the Colonel said. “You’re a deceptive son of a bitch.”

So thank you for writing this, you deceptive son of a bitch, even if you never finished it. I tip my hat in the direction of your grave.

Are you an author interested in contributing a review like this? We’d love it. Simply send the review, a bio, and a graphic of your upcoming (or old) releases.  We only ask that you not be connected to the author in anyway so as to avoid conflicts. Thanks!