On his retirement, George Ainstey had moved to Ellstream, hoping to escape from the tensions of London life. His only neighbors were Lady Charlotte Merrion, who lived in the mansion on the site of an eighteenth-century ruin, and her daughter-in-law, Antonia Merrion, whose land adjoined Mr. Ainstey’s.

But even in backwaters there is occasional turbulence. With the arrival of Lady Charlotte’s guests and Mrs. Merrion’s son and brother-in-law, undercurrents long dormant were brought to the surface, and the quiet hillside overlooking the country town was to become the focus for mystery, family rivalry and romance.

Having now finished and enjoyed this book, I’m still not sure what exactly enticed me to buy and try it next. Perhaps it’s that when all is said and done, I wasn’t really sure what I was going to get and it was that mystery that lured me in. But whatever it was, I’m glad I gave it a go. Complicated? Cadell winds this plot around itself, spins it a few times and then adds a few more twists for good measure but it all comes out right in the end.

Hmmm, I’m trying to figure out a way to explain the plot(s) without copying the whole book into the review. In a small, out of the way English village, the varied members of two families meet, greet, and eat. There are tensions between neighbors (which they are) and relatives, there is a mystery that involves an 18th century East India Company nabob and his torn down house, there is a man who isn’t sure he still wants to be engaged to a High Society London Beauty (nor do we want him to be), there is a young woman of calm serenity who delights a young man with her prodigious appetite, there is another young horsey woman who scares half the men around her and is making a beeline for one of them (which terrifies him), there is a grand-dame whose son despises her and whom she in turn despises, there is a delightful middle aged woman who radiates gentility and manners, and a plain speaking aunt who gives the first young woman some realistic advice. 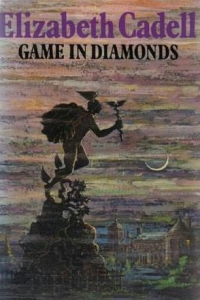 As the story unfolds, it will help to keep little clues and details in the back of your mind because they will all be important at some point. Especially the bricks. There are two romances going on – both of them on a slow boil. As I mentioned, one man is facing a female juggernaut he can’t find a way to escape. Well, she has that effect on almost everyone. The other young man knows he’s finally found who he wants but must now convince her without spooking her. Oh and the mystery – can’t forget the mystery and the way that the language professor unknowingly cracks the case and how one person, with her advice, tries to end a decades long feud.

I might not have started out liking all the characters – and in fact wasn’t fond of one through the whole book – but others ended up growing on me and added their bit to the whole. It’s not one of her laugh out loud books but it does have some quiet touches of humor. I liked how things wrapped up and how no matter how convoluted, Cadell kept hold of the story. B