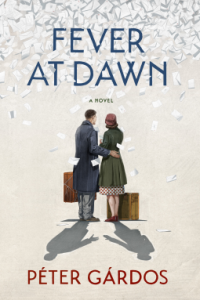 In this improbably joyous novel about two recovering concentration camp survivors, love is the best medicine.

July 1945. Miklos is a twenty-five-year-old Hungarian who has survived the camps and has been brought to Sweden to convalesce. His doctor has just given him a death sentence — his lungs are filled with fluid and in six months he will be gone. But Miklos has other plans. He didn’t survive the war only to drown from within, and so he wages war on his own fate.

He acquires the names of the 117 Hungarian women also recovering in Sweden, and he writes a letter to each of them in his beautiful cursive hand. One of these women, he is sure, will become his wife. In another part of the country, Lili reads his letter and decides to write back. For the next few months, the two engage in a funny, absurd, hopeful epistolary dance. Eventually, they find a way to meet.

Based on the true story of Péter Gárdos’s parents, and drawn from their letters, Fever at Dawn is a vibrant, ribald, and unforgettable tale, showing the death-defying power of the human will to live and to love.

I’ll admit that the opening part of the blurb made me wince but I kept reading all it the way through and was reassured by the fact that it’s a true story written by a son about his parents. The hope for a future shown by Miklos’s plan to find a bride made me decide to try it. The man’s been through hell but he’s not down and out by any means. He’s fighter who is sure he’s going to triumph. I mean, think about it. You’ve survived a concentration camp, a doctor has given you 6 months – 7 tops – to live due to your advanced TB. What do you do? Why, start writing letters to young Hungarian women who are also refugees in Sweden.

Each character bears his or her own scars: worries about their illnesses, the fate of their families, hope, plans and dreams. After reading her initial reply – reluctantly written at the urging of her friends, somehow Miklos “knows” that Lili is the one. So their slow, gradual exchange of letters begins. After all they’ve been through, a little thing like being on the opposite sides of Sweden from each other isn’t going to stand in their way. With gentle but dogged persistence they carry on – with the help of their friends, of course.

Some of Lili and Miklos’s experiences in Belsen are mentioned but they’re told in a matter-of-fact way with a lack of pathos, the events themselves being enough to supply that. As their courtship continues, we can see that all of the survivors are making new groups and families for themselves to fill the gaps in their lives. Troubles, triumphs and petty jealousies visit the survivors and Miklos eventually uses his socialist viewpoints to agitate for better conditions in the hospitals.

The book doesn’t end with their marriage showing a perfect romance novel HEA. It isn’t guaranteed even after surviving such awful things. Miklos and Lili Gardos had their share of challenges even after heading back home. Miklos’s dedicated Socialism didn’t flourish in the reality of postwar Hungary and over the years neither would speak of Belsen. One issue that might be heartbreaking as well as disturbing for readers is their changes in feelings about religion. I’m not sure how common Lili’s rejection of her faith after the war was and the book doesn’t detail anything about what happened to their views once they returned to Budapest.

Though their quirky and charming romance lead to 52 years of marriage, this is real life and not fiction. I found their story uplifting but I will emphasize the disillusionment with and questioning of faith that occurs. Readers should be aware. B