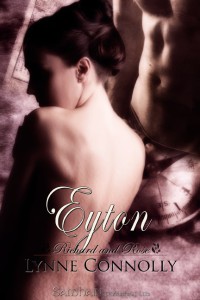 At last, at last. The continuation of the series faithful fans have been waiting for. It all started years ago with “Yorkshire,” “Devonshire,” “Venice” and “Harley Street” as we watched the aristocratic Richard Kerre, heir to the Earldom of Southland, and Rose Golightly, daughter of the gentry, fall in love at first sight then battle for the right to marry. Everyone said it would fail, that rake Richard would never stay true to quiet wallflowerish Rose. But these two knew their own hearts and found in each other that which most married couples didn’t even bother to look for: true love.

Now Rose has finally given birth to their first child. I say finally not because it’s been so long since R&R were married but rather it’s been so long since the last book in the series, “Harley Street,” when Rose announced her “interesting condition.” What was it? five years? Not even elephants stay pregnant that long! [G] Anyway, the Kerre family is gathering to celebrate the birth of young Helen (I totally agree with Rose’s reaction to the name suggestions Richard jokingly made) and love, theft and murder are in the air. Can R&R further the cause of true love, discover who’s got the light fingers, solve a murder and keep scandal away from the family?

I love the snapshot of the mid-eighteenth century presented in these stories. Your history is definitely not wallpaper but detailed, in depth, well researched and integrated into the fabric of the plot. R&R discover that the theft of a necklace ties in with the murder of one of the victims but to do this requires learning about the working class victim, his duties, his opportunities, his past and who might have directed his actions. This allows us to see a comparison between the aristocratic world of the Kerres and that of their working class servants.

But when the crime seems headed in the direction that would hit close to home with the Kerre family, Richard, who has a passionate interest in seeing justice done, is caught in a dilemma. Does he let nature take its course and risk a scandal for the family or does he work behind the scenes and do what’s right but not necessarily legal?

The eighteenth century world doesn’t seem that much different from today in that the masses avidly read about the rich and famous and are just waiting for the great families/famous celebrities to flub up. And you make quite clear what flubbing up for the Kerres would mean – difficulty in making advantageous marriages, weakening the power of the Earldom and wrecking the chances of Gervase who is standing for Parliament.

I like how you also use this subplot to point out the first bit of contention between Richard and Rose. Raised in the gentry, Rose is bothered by Richard’s decision to not only not tell the constable the truth but to actually lead the man’s investigation astray. Up until now, the personal differences R&R faced were seemingly minor and easily overcome by their love for each other. But here’s something that will present Rose with a major division between her old life and her new one. This showcases one of the strengths of the series – that it portrays the evolving relationship between these two characters as would be expected in any marriage.

In the previous books, Rose is seen to be struggling a little to find her way in her new world. In “Eyton” I’m glad to see that her confidence, or at least her public acting ability, is increasing. She’s not just aping the great lady anymore but we see that she’s slowly becoming one. She’s also a new mother, dealing with the changes that brings to her station and to those who, up until now, had stood closer in the line of succession to the Earldom.

As well, she’s worried about how motherhood might change her relationship with Richard – which surely all new mothers must feel. Richard is a champ in this department, displaying his love for his wife and new daughter to their family and in some cases to the masses. I have to admit that I got tired of having the point driven home about Richard’s public mask of aristocratic hauteur and how he sometimes lets it slip to show his real feelings for Rose. I recall it from the previous books and didn’t need a reminder every other chapter.

And now for the questions. You know I always have questions about your books. Is Eyton based on any particular stately home? Were international marriages among the aristocracy common? How did the Kerre family silver avoid being melted down to support the King during the Civil War? Are there prospects for Georgianna? And of course I’m still “Waiting for Gervase.”

Though new readers could actually start the series with this book, I would suggest beginning at the beginning to catch all the references and see the evolution of Richard and Rose’s relationship. I’m thrilled to see the series continuing and eagerly waiting for the next installment. B for “Eyton.”