REVIEW: Every Frenchman Has One by Olivia de Havilland 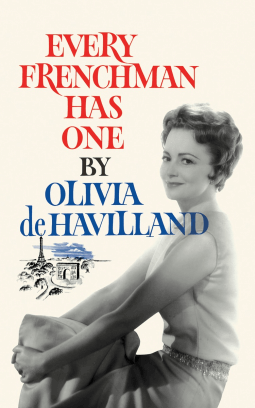 Back in print for the first time in decades, the delectable escapades of Hollywood legend Olivia de Havilland, who fell in love with a Frenchman—and then became a Parisian

In 1953, Olivia de Havilland—already an Academy Award-winning actress for her roles in To Each His Own and The Heiress—became the heroine of her own real-life love affair. She married a Frenchman, moved to Paris, and planted her standard on the Left Bank of the River Seine. It has been fluttering on both Left and Right Banks with considerable joy and gaiety from that moment on.
Still, her transition from Hollywood celebrity to parisienne was anything but easy. And in Every Frenchman Has One, her skirmishes with French customs, French maids, French salesladies, French holidays, French law, French doctors, and above all, the French language, are here set forth in a delightful and amusing memoir of her early years in the “City of Light.”

Paraphrasing Caesar, Ms. de Havilland says, “I came. I saw. I was conquered.”

Olivia de Havilland has starred in some of my favorite movies so when I saw this offering at netgalley, I knew I had to read it. It seems like you can’t avoid seeing dozens of books everywhere you look today with titles about France, Paris and moving to France or Paris but here’s one that predates most of them. In the mid 1950s, de Havilland met and fell in love with a Frenchman, moved to Paris, married him (after the compulsory 90 day waiting period once her divorce was final – just to make absolutely sure she didn’t change her mind), and settled down. But that was far from “The end.” Now comes the adventure of living in Paris.

She writes in a fun, chatty style as if you’re friends, sitting down to lunch and a nice coze. She does drop some Hollywood names that might not be as recognizable now as then such as Hedda Hopper (famous gossip columnist) and Jose Ferrer (you’ll know him if you’ve ever watched the 1950 Cyrano de Bergerac). But apart from a mention or two of her heading back to the US to make a movie, she generally sticks to recounting the challenges of her new life in France.

Learning the language, getting her liver tuned up during a 13 day vacation at an Italian spa, finding an apartment, driving in Paris or rather not trying to drive in Paris, tackling French saleswomen, being introduced to French medicine and discovering what the “smoking” notation on a formal dinner invitation means and how French holidays differ from American ones are just some of her adventures in becoming “Madame.” Her “presentation” at the salon of the most sought after hairdresser in Paris is a scream. You almost expect that she will have to genuflect to him. The chapter on renovating their newly purchased house in Paris – where de Havilland learns that to the corps de métier a design plan is merely a jumping off point while to the painters an agreed upon paint color scheme is merely a suggestion and that one must never interrupt an electrician’s lunch – is hilarious. I wish the book was longer but what there is is delightful. B