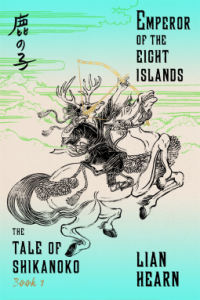 In the opening pages of the action-packed Book One of Lian Hearn’s epic Tale of Shikanoko series–all of which will be published in 2016–a future lord is dispossessed of his birthright by a scheming uncle, a mountain sorcerer imbues a mask with the spirit of a great stag for a lost young man, a stubborn father forces his son to give up his wife to his older brother, and a powerful priest meddles in the succession to the Lotus Throne, the child who is the rightful heir to the emperor barely escaping the capital in the arms of his sister. And that is just the beginning.

As destiny weaves its rich tapestry, a compelling drama plays out against a background of wild forests, elegant castles, hidden temples, and savage battlefields. This is the medieval Japan of Lian Hearn’s imagination, where animal spirits clash with warriors and children navigate a landscape as serene as it is deadly.

I had heard your name mentioned whenever readers discuss fantasy books set in locations other than faux medieval Europe. I think I’ve actually got a few of the “Tales of the Otori” books in print tucked away somewhere among my Library of Congress sized TBR stacks. One day … Anyway, when I saw the lovely covers for the first two books in your new series, it was my impetus to finally see why so many readers speak of you so highly. I’ll be honest and admit that fantasy books are not my usual genre so tropes which might be “ho-hum” to devotes will probably still be fresh for me. That being said, I had a wonderful time reading this opening book in the series.

In feudal Japan, it is a time of unrest when warlords fight and scheme to increase their lands and followers. Men live uneasily beside sorcerers who can conjure freakish animals back to half-life and turn things into magic objects of power. Werehawks can speak to those with the ability to understand them and fierce tengu can tear men apart with their beaks and claws. The Emperor is weak and there are those who will stop at nothing to direct the course of imperial power.

Since this is the first book, there are lots of characters to introduce and storylines to begin. It takes a little bit of effort to keep all the names straight – not because they are Japanese so much as because a character can have several different ones depending on what happens to them in the story. Everyone is morally ambiguous – making choices which make sense for the time but with which readers might have issues. But they are layered and as much as you might not like what they do, you can understand what drives them and feel sympathy for all of them despite what they might get up to.

The title for the series is “The Tale of Shikanoko” so obviously he is the main character to follow. He has power from the deer mask one sorcerer makes and the concentrated powers from another but no guidelines or idea of how to control them. He’s kind of like the Sorcerer’s Apprentice that way. But each character gets their moments to shine as their lives become tangled together.

I was delighted at the many roles for women here and how they still seemed “period” rather than standard fantasy kickass. Most have some power but, so far, only as wives or daughters who are under the control of men and given limited authority over running the households. Only one, a sorceress, has some autonomy and is the female feared by most of the men. But I think, based on what I’ve seen here, that women will be forces to be reckoned with in the coming books.

Book One ends with some major events setting the plot of the next book in motion. Powerful forces – good and bad – are loose and our main characters are all in moments of change and flux. Bonds have been forged and broken, emotions are running high and danger is all around. It’s an altogether great spot to end this part and stoke the “but what happens next?!” for Book Two “Autumn Princess, Dragon Child.” B