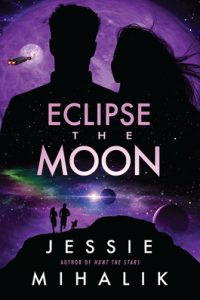 The Starlight’s Shadow trilogy, which kicked off with Hunt the Stars, continues with this second installment, Eclipse the Moon. The romantic pairing this time round is Kee Ildez (human, hacker and systems expert) and Varro Runkow (Valoff, telepath, weapons expert), who met in the first book and who clearly had some chemistry. When they first met, Varro messed up and had to grovel big time to Kee but right from the start, Kee thought he was hot.  After that, they settled into a good friendship but each believed the other wasn’t interested romantically (even though they both were).

At the end of Hunt the Stars, the crew of Starlight’s Shadow (which now includes Valoffs, Torran, Varro, Chira and Havil, in addition to humans, Tavi, Kee, Eli and Anja) have rescued Cien, the Valovian Empress’s grandson and Torran’s nephew. They have also realised that someone is trying to break the peace treaty between Valovia and the Federation of Human Planets (FHP) and restart the war. Having all been soldiers in that war, none of the crew want that to happen. It is unclear exactly how involved the Empress is but what is certain is that FHP Commodore Frank Morten is a leading player in the conspiracy. Just how deep it goes and how high is as yet unknown. As Eclipse the Moon begins, Kee and the crew are searching for Morten.

Kee comes up with a plan to take a break on Bastion, the last space station in FHP territory before the wormhole to Valovia. She wants to do some hacking to try and find more information on the conspiracy and would prefer to do it without implicating Tavi in any way. On Bastion she can be anonymous. She wants to splice into Bastian’s systems and dig around in their data. There’s also a fashion show about to happen – a collaboration three years in the making between two haute couture designers – one Valovian and one human. Kee wonders if the show could be a front for something. The other big reason for her trip is that she wants to get away from Varro. She needs to pack her feelings away because (she thinks) it’s clear that they will never be anything more than friends. She wants to re-set her brain so that hopefully, when she rejoins the crew, she will not be constantly heartbroken about what cannot be.

I don’t think it will be a surprise to anyone that the deeply protective Varro is most unhappy that Kee left the ship alone. (He threatens to “go out the airlock” if Tavi doesn’t take him to Bastian so he can ensure Kee’s safety.) Kee doesn’t initially know he’s there but when she needs him, voila, there he is.

After that, Kee and Varro are together for most of the book and the adventure truly begins.

I won’t go into much more of the plot because I think it’s best experienced when reading but suffice it to say that there is a spectacular disaster which causes both to have to stretch their abilities to the max in order to escape alive. And after that, there is more rescuing to do, including more daring, adventure and risk, while also trying to piece together more information about the plan to break the peace and put a stop to it.

The overall story arc regarding the conspiracy is not solved in this book – that will be for the final book in the trilogy (which I believe will feature Lexi and Nilo as the romantic pairing – this pair are pseudo crew but are not on Starlight’s Shadow this time round). There is further information though, some of which I admit was a bit lost on me. I still don’t really understand what the Empress is doing and if/how it relates to what Morten is planning (and I think I was supposed to more than I did). I expect all will be revealed later on but it did get pretty twisty in there and some of it went over my head a bit I think.

Eclipse the Moon has a bit of a slow start. The first three chapters are about getting Kee to Bastion but once Varro and she are together on the space station the action is largely non-stop from there. This series does not suffer from the second book sag which can sometimes happen in trilogies. Having the benefit of the previous characterisations and relationship and backstory, it can get into the meat of the adventure more quickly and it does more with it than the first book did.

The difficulty perhaps with such a story is finding bits of “downtime” where the romance arc can develop. I liked that Kee and Varro, for the most part, talked openly about what they felt and what they wanted. Once they started to do that (something they did not do in Hunt the Stars) it is clear that they are both deeply into one another. Kee tends to overthink things and finds the best way forward it just to blurt out a question so she knows the answer rather than ruminate. Which did make me wonder why she took so long to ask in the first place but there you go.

There were a couple of other things I noted about Kee. She refers often to writing things down on her tablet so that she remembers them, setting alarms for herself to do things because she’s so often buried in her current task, about how she might repeat something to herself a number of times to try and recall it later if she couldn’t write it down but there was no guarantee it would work. However, later in the book Tavi talks about Kee’s memory as if it’s a steel trap and Kee agrees. I couldn’t quite square that circle.

Once Kee and Varro decide to give things a try there isn’t anything (other than the external drama going on around them) which would really keep them apart and the story introduces something which felt a little artificial to me. Perhaps because there was a similar thing about Valoff honour in book one (not the whole romantic conflict but a part of it), I saw this as a deliberate obstacle put in the way by the author rather than it being organic to the story. Really, the shooting, kidnapping and explosions were enough to slow things down but I suppose the romantic arc needed a barrier for them to overcome as a couple rather than just surviving to the end to get their HEA. Still there were similarities to book 1 so it didn’t feel quite as fresh as the other storyline.

I liked Kee and Varro together very much. The strong silent protector is very much my jam. Varro feels things deeply but is very reserved outwardly.

Tavi and Torran, while having pivotal roles in this book, are not the focus and Tavi’s willingness to let Kee lead here so much sometimes seemed a little convenient.

Much of the book does not take place on Starlight’s Shadow however and Kee and Varro are (effectively) alone to deal with what Morten (and maybe the Empress but maybe not?) is throwing at them. It was those sections of the book which shone the brightest as it made complete sense they were relying on their own wits and skills and each other to prevail. Later in the book the way the rest of the crew joined the adventure fit much better.

Eclipse the Moon is a rollicking good space adventure story. I enjoyed the way Kee and Varro worked together, how they deferred to one another as appropriate, how I saw their romance bloom as they were fighting the bad guys but the romance itself is secondary to the rest of the story. And it works just fine that way.