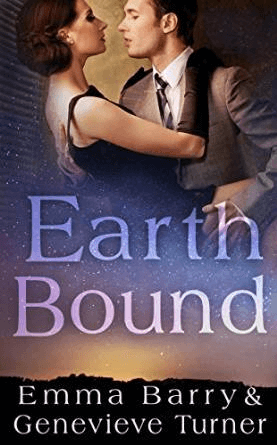 The race to the moon is on, and engineer Eugene Parsons has two enemies: danger and distraction. Nothing is more distracting than his attraction to the brilliant, beautiful computer scientist on his team, but he’s determined to overcome it since he needs her to help America win.

Charlie Eason is used to men underestimating her. It comes with being a woman in engineering, but it’s worth it to join the space race—even if she can’t figure out what’s behind the intense looks one tightly wound engineer keeps sending her. But life isn’t as unemotional or predictable as code, and things soon boil over with the intriguingly demanding Parsons.

With every launch, their secret affair grows thornier. The lines between work and play tangle even as Parsons and Charlie try to keep them separate. But when a mission goes wrong, they’ll have to put aside their pride for the greater good—and discover that matters of the heart have a logic all their own.

Now this is clever. In a series about the space program I’d expect astronaut stories and yes, you’ve delivered two of them so far. But when I read the excerpt for this book, I knew I had to read it. An engineer and a woman who sounds like she can bust bad on you if she wants. Yes, I crowed. Sign me up. Especially since the engineer, Eugene Parsons, is such an intriguing secondary character in the first book. He loves to make astronauts cry.

The book jumps right into a mission and encounter between Charlie and Parsons during a test flight. The stage is set showing their no nonsense working relationship. Fellow ASD (American Space Department) coworkers live in fear of Parsons but Charlie isn’t scared of him. She can take what he dishes out and sling it right back if need be. She’s fought her way through a PhD in mathematics and is used to the way men can act but she does admit that as volcanic as Parsons can be on a bad day – make that any day that people don’t live up to his expectation of perfection at work – he has total confidence in her work abilities. Refreshing to say the least.

These two, their confidence and arrogance is pugnacious. It’s “in your face and take that because I’m that good.” At work Charlie doesn’t back down and do the feminine denigration of her own skills and her (deserved) self confidence is sexy to Parsons. It practically has him chewing the furniture trying to keep his body under control and his intense stares make Charlie feel as if she should have ignited by now. He intrigues her too as she tries to figure him out – run a schematic on him is the way she puts it. Their meetings are cerebral contact sports. But then they’re like Formula 1 racecars while most of their colleagues are puttering along like Yugos. Work is their passion and they don’t settle for merely okay or “good enough for government work.” Parsons might be a ranting asshole to most everyone else, but he believes in Charlie.

The tension and attraction between them ratchets up over the months until one evening when Charlie spots something in Parsons’ eye which she reciprocates. Let’s just see where this might go, type stuff. The resulting encounters have enough fire power to put a Saturn 5 rocket into orbit. What they start with is “hard, head clearing sex.” There is an absolute wall they keep between their seedy motel “fucking each other until they can’t see straight” nights and “all for the mission” long hours at the ADS. It makes absolute sense for the same reasons interoffice relationships can still cause issues today and even more so in the early 1960s. But it also lets them drop their work guard and demand exactly what they want in that motel.

Parsons is fascinated by Charlie’s “mask” of makeup that she reapplies even at 10 pm on her way home. But then it’s just another trick Charlie uses to maintain control and a wield the weapon of her beauty to level the work playing field. She gives nothing away and Parsons enjoys a challenge – after all, he keeps saltwater fish aquariums. She’s not going to fake a response for him and he’s got to earn it by giving her mind blowing orgasms. With his engineering mind and perfectionism, when used during sex, the results are better than Charlie’s had before and she knows her way around her own body as well as men’s.

Slowly their relationship shifts and they become more than colleagues and lovers. Emotions – tentative and stiff from lack of exercise – get flexed. Cracks begin to appear in the wall. As the months pass, he realizes that she’s the one he wants to talk to and he’ll even attempt awkward social conversation he knows he’s no good at. He thinks about showing her his fish and she finds herself telling him about her demanding PhD physicist parents. They notice little things about the other, things no one else sees.

The final conflict between them and of the book is genuine, building out of the issues laid out throughout the course of the story. The resolution of this which puts Parsons and Charlie back together to salvage a mission, brings together everything right about them, their faith in each other, their skills and their dedication to the mission. I love that it allows Charlie to shine at her brilliant math things and earn the accolades she deserves.

The honeymoon epilogue is so cute – with the two of them itching to read some spec and tech articles while out on the beach. And extending the (slightly) alternate history of this space program looks like it’s going to give another wowza combination of main characters to look forward to. I’ll let readers delve into the excerpt to see for themselves. B+