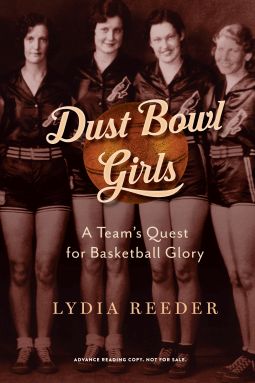 At the height of the Great Depression, Sam Babb, the charismatic basketball coach of tiny Oklahoma Presbyterian College, began dreaming. Like so many others, he wanted a reason to have hope. Traveling from farm to farm, he recruited talented, hardworking young women and offered them a chance at a better life: a free college education if they would come play for his basketball team, the Cardinals.

Despite their fears of leaving home and the sacrifices faced by their families, the women followed Babb and his dream. He shaped the Cardinals into a formidable team, and something extraordinary began to happen: with passion for the game and heartfelt loyalty to one another and their coach, they won every game.

Combining exhilarating sports writing and exceptional storytelling, Dust Bowl Girls conveys the intensity of an improbable journey to an epic showdown with the prevailing national champions, helmed by the legendary Babe Didrikson. And it captures a moment in American sports history when a visionary coach helped his young athletes achieve more than a winning season.

This book reminded me a little of the film “A League of Their Own” but is about women’s basketball in the early 1930s. We’re just emerging from the time when women were thought too fragile to be able to play this sport even with the different rules in place then – ones I remember playing by in phys ed classes when I was in grade school 40 years later. For these athletic women it wasn’t just being able to play a sport they loved that drew them in, it was a scholarship and undreamed of opportunity at a college education during the early years of the depression and the start of the dust bowl that would devastate their home state.

Oh my, the conditions under which they worked. There was only a half court on their own campus and later the opportunity to practice at a local men’s college gym but only when the men wouldn’t be inconvenienced. This meant practices at 4 am – an hour before the heat was turned on by the custodian. The bus used to take them there was held together by spit and bailing wire and often pushed to get it started. The players were thrilled at the thought that they’d get modified uniforms – not the up-til-then standard bloomers.

Still these issues were nothing as compared to the public view of women playing competitive athletics which might – the horrors! – subvert their natural feminine qualities, cause the great unwashed to leer at them during games and might possibility – I swear I choked when I read this – cause their wombs to shrink then disappear thus turning them into men. All sorts of people weighed in on how to preserve the nation’s young women from the exploitation of sports, the risk to their health and delicate sensibilities leading to almost the elimination of college sports and forcing those teams that remained to play amateur teams supported by businesses. Oh, and there was the increasing Depression, the fall in school funding and risk that the Cardinals players would lose the scholarships that allowed them to attend college.

One way to attempt to raise money was barnstorming tours and after a successful one, the Cardinals proved their worth by beating several highly thought of teams including the one that won the championship the year before. With their chance to compete in the tournament this year clinched, they were Shreveport bound. But after winning every game they’d played that year, would injuries, nerves, the opinions of the sportswriters that women should be pretty and stay at home and the great Babe Didrickson derail their hopes?

But after the beauty contest – yes – the Cardinals win their semi-final to make the finals. Dismissed by most if not all the sportswriters and others following the tournament as that little church school team, the Cardinals discover that it doesn’t matter if anyone else thinks they can win. Do they think they can do it? Meanwhile family who can manage it make the trip to see the game and little Durant, OK is in a frenzy during the tournament with the local paper using the AP wire to keep the town updated on scores, injuries and team gossip and later setting up two telephones in the local drug store to deliver the scores during the final game.

Game time and there are 4,000 cheering fans crowded in the stands. The last five championships had been won by Texas teams. Would an Oklahoma team finally be able to break the streak and triumph in the rivalry between the two states? The momentum swings each quarter and Coach Babb uses his psychology training to give the Cardinals a rousing halftime pep talk. When the final gun sounds, the stands erupt. Those waiting in Durant for the phone call dive for the receiver when it rings then estimate they fielded over 1000 phone calls in the next few hours passing on the final score. The reception the team got as they headed home was all out, small town exuberance.

In the years that followed, all the players excelled both in basketball and in class. They went on to teach, continue playing and many served in the war effort both before and after marrying. In 2003, at the Oklahoma Sports Hall of Fame ceremony, the whole team received acclaim as the scrappy team from a tiny girl’s college who became the Team of Legend. Far from losing their femininity – gasp – or being exploited, during the worst drought and a devastating financial depression they were brought together and then become leaders using the skills gained on the court.

“For Lucille, her teammates, and the other young women who challenged society’s norms to pursue their dreams, basketball had given them not only confidence and drive but also the tools to succeed. And these farm girls, who at one time never thought of lives beyond the cotton fields, got to be heroes.”

→ Jayne
Previous article: DAILY DEALS: Into the Wilderness, the Wild, and the Dangerous
Next Post: NEW RELEASES: Week of January 24, 2017