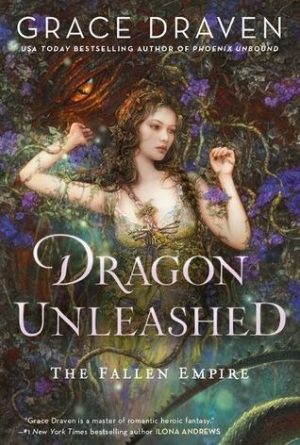 I adored Phoenix Unbound last year so I was really excited to read the second book in The Fallen Empire trilogy, Dragon Unleashed. Plus, dragon!

The two books overlap slightly, with most of the action picking up at the Goban market where book one ended. While the romance and story arc are self-contained, I think the world building and the over-arching story mean that this book wouldn’t stand alone well. Also, many of the characters are introduced in book one and this book relies on knowledge readers gained there.

For fans of Azarion and Gilene (of which I am one) there were some glimpses of them at the beginning and I hope we may see them in book three as well.

Malachus is a draga, and the dragon of the title. (I imagined him as a younger, ripped Keanu Reeves.) He is searching for the “mother-bond” a piece of bone from his mother’s wing-claw which will enable him to transform from human into draga for the first time. To protect their young, child-draga are bound into human form until they reach an age where they can defend themselves from predators (mainly of the human kind). Malachus was fostered in a monastery in his home country of Winosia. I was a bit fuzzy on the timeline – Malachus is about 200 years old when the book begins, but my understanding is that he reached maturity some time ago and could have transformed earlier had he access to the mother-bond. I may be wrong on that though. In any event, the mother-bond was stolen and he’s tracked it to the Krael Empire and, more specifically, the Goban market. He is finding it increasingly difficult to control the draga within. Without the mother-bond he cannot transform successfully that first time and will self-immolate and die if he loses control. It is increasingly urgent he find the mother-bond.

He has a fairly dim view of humankind overall, having seen much greed and evil behaviour, apart from the monks who raised him and the theft of the mother-bond by tomb raiders looking for a quick profit did not further endear the race to him. However, he reminds himself they’re not all bad.

As a draga, he has a magical affinity with lightning and the sun and sky and also, the earth. Calling the lightning to him to get more certain information about the whereabouts of the mother-bond, he sees a gray-eyed woman. When he meets Halani (whom he calls “Halani of the Lightning”) he becomes more and more intrigued by and attracted to her quite aside from any connection she may have to the mother-bond.

As it happens, Halani’s uncle, Hamod, has bought the mother-bond from two mercenaries (who want to get rid of it fast as they know Malachus is hot on their heels), much to Halani’s dismay. She senses the power in the bone and sees only danger ahead. She wants nothing to do with it. However, avaricious Hamod bought it anyway and plans to sell in the new capital, Domora, where he can make the most money.

In the meantime, Empress Dalvila has tasked her cat’s-paw, Gharek, with finding the mother-bond and the draga to whom it belongs. She wishes to harvest his blood and use draga magic to grow a new arm, the original having been amputated following the final battle in the first book. She then wants to replace the draga skeleton which was destroyed in that same conflagration with a new one in order to show her might to all.

Gharek is a somewhat complicated character. He does evil things and often, in order to stay alive. Dalvila is a cruel and brutal woman who does not tolerate failure or disobedience. His weakness, at least according to Dalvila, is his beloved daughter Estred. Estred is disabled and was born with no arms.  He protects her from the cruelties of the Kraelian society which would reject and harm her and, ultimately, justifies his evil deeds on behalf of the Empress because in doing so he preserves his life and thus his daughter’s. If he fails in a task she sets him, the Empress has made it very clear, it is his daughter who will suffer first and he will do anything to see his daughter does not suffer. In this case too, given the rumours that draga blood has these magical properties, he hopes to use some draga blood for Estred. I had some misgivings about this aspect of the storyline I admit. I am not an expert but I would be interested to hear from disabled readers about their views. It seemed to me that the storyline could easily be read as ableist and I’m not sure that it can be excused by the narrative arc.  It wasn’t Dalvila’s plot which bothered me as such; her behaviour was very consistent with her character. However, the Estred storyline didn’t share that and I wasn’t quite sure how I felt about it.  Maybe I’m overthinking.

After Malachus is attacked and left for dead, Halani rescues him and uses her Earth-witch healing skills on him. He joins the free traders’ caravan as he heals and they get to know one another and, of course, fall in love.

I don’t want to say too much more about the plot here. It’s best to let it unfold itself. There is far more to the romance than “Malachus joins the caravan and he and Halani fall in love” of course but  that is essentially the nub of it.

In the meantime, Malachus still seeks the mother-bond and he is, albeit that is unknown to him for most of the book, in a race against Gharek and Dalvila’s plans for the mother-bond and himself. And of course, he continues to battle the draga within to hold on until he can transform properly.

The final section of the book is very tense as all the players and the storylines come together. It’s a romance so I knew there would be a HEA but if not for the inherent genre promise I’d have been beside myself about then I think.

I struggled to find time to read this week and so it took me a bit longer to finish Dragon Unleashed than it would have otherwise and perhaps my reading experience was somewhat diminished by the intermittent nature of my attention to it. I found Phoenix Unbound a more cohesive book and more action-packed. Dragon Unleashed was quieter for much of the story and more interior in many ways, at least, up until the climactic end.

I tried to find some information about the next book but was unsuccessful. I have a feeling I know who the third heroine might be though.

I liked both  Malachus and Halani very much – both as a couple and individually. I was so moved by the compassion Malachus still had within him considering his history with humankind and what had been done to him and his family by them. I admired how he was able to see other points of view and understand the motivation of others even when he did not agree. I liked his nobility and steadfastness. Halani is a little more practical in nature; of necessity she has had to compromise on some things and do things she would not otherwise do, but at heart she is a kind and generous woman who loves her family, particularly her mother. There is, in a way, an interesting juxtaposition between Halani and her mother, Asil, and Gharek and Estred.

There are some lovely descriptions in the book, revealing character and story in the most beautiful ways.

When she first met him, she’d thought him more memorable than striking, with a face too angled and harsh for ideal male beauty like Azarion’s.

She no longer thought that way. There was beauty in severity, in unforgiving lines and hollows. She fell asleep at night with his image painted across the inside of her eyelids and found him breathtaking.

I’m not sure exactly what I was expecting with Dragon Unleashed. Perhaps I thought it would be more similar to Phoenix Unbound. It is not. The books are very different in tone, with this book being somewhat slower paced. I enjoyed Dragon Unleashed however and I’m very intrigued at what’s next for the Empire and where and how the trilogy will end.

→ Kaetrin
Previous article: Open Thread for Readers for July 2020
Next Post: Some Elizabeth Cadell books are now on sale.