REVIEW: Dancer of the Nile (The Gods of Egypt) by Veronica Scott 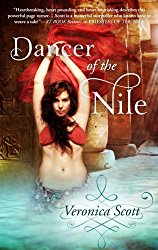 Egypt, 1500 BCE: Nima’s beauty and skill as a dancer leads an infatuated enemy to kidnap her after destroying an Egyptian border town. However, she’s not the only hostage in the enemy camp: Kamin, an Egyptian soldier on a secret mission for Pharaoh, has been taken as well.

Working together to escape, the two of them embark on a desperate quest across the desert to carry word of the enemy’s invasion plans to Pharaoh’s people.

As they flee for their lives, these two strangers thrown together by misfortune have to trust in each other to survive. Nima suspects Kamin is more than the simple soldier he seems, but she finds it hard to resist the effect he has on her heart. Kamin has a duty to his Pharaoh to see his mission completed, but this clever and courageous dancer is claiming more of his loyalty and love by the moment. Kamin starts to worry: if it comes to a choice between saving Egypt or saving Nima’s life…what will he do?

Aided by the Egyptian god Horus and the Snake Goddess Renenutet, beset by the enemy’s black magic, can Nima and Kamin evade the enemy and reach the safety of the Nile in time to foil the planned attack?

Can there ever be a happy future together for the humble dancer and the brave Egyptian soldier who is so much more than he seems?

I’m kind of weaving back and forth with this series about The Gods of Egypt. There’s a an order listed but so far reading random ones doesn’t seem to have affected my enjoyment of them. It’s 1500 BCE, enemies have invaded (slightly alternate) Egypt, the gods are real and you don’t mess with them.

Nima and Kamen are both prisoners of war. Kamen is a soldier, one of Pharaoh’s own and it’s vital that, with his knowledge of the enemy’s plans, he escape so he can warn the nomarch of this region, rally the troops, and save the country. At first he’s not sure who the Egyptian woman on the chariot of the Hyksos commander is but when she’s punished for daring to bring him some water on the dusty march, he realizes she’s a prisoner too. Luckily for him, Nima is smart, a good cook, and knows her local herbs because it’s her actions that allow them to escape. Yet the Hyksos are hot on their trail.

As they flee, Kamen learns about Nima’s life as a tavern dancer who is the daughter of a former priestess of the snake goddess. Nima also got a good look at a map of the enemy stronghold and keeps up during their journey far better than Kamen thought she would. Impressed with her before, he’s really in awe when she saves them from the nefarious plans of a caravan leader. It’s while traveling with the caravan that he sees her in her element among the foreign Minoan dancers. Finally she’s accorded respect for her talents and Kamen – aided by a touch of jealousy – realizes how much he admires her. Can he be falling in love?

But the foreigners who are trying to take the kingdom roar back along with some demons raised by the priest determined to sacrifice Nima to his god. She’s apparently got some powerful juju. She can also call to the Snake Goddess Renenutet and get a reply. A giant cobra goddess! How cool. Can Kamen cajole his own god Horus into allowing him to save Nima while also saving the country? And is their a future for a tavern dancer and a soldier who might be concealing some key information about himself?

I don’t know that much about the Hyksos but here they are villainous baddies who worship a terrible god with human sacrifice. The general also has an obsession with Nima for no other reason I could see beyond the plot and his pants.

Nima and Kamen get plenty of road romance time to discover much about each other and to see the other’s true value. Kamen shows that he listens carefully to what is important to Nima and in the end, provides it in spades. When they need to call on the power of the snake goddess, he’s the one who knows what will get her attention. Renenutet is definitely not one to be messed with and demands that Nima listen up and pay attention when she speaks as she is one of the Elemental Ones and doesn’t suffer fools.

Kamen also makes sure that everyone knows how much she did to rout the enemy and help save Egypt and in doing so he gives Nima the chance to choose her destiny. Yeah, I liked Kamen. I also liked that Nima and Kamen see the world as Egyptians who are worried about the afterlife, their kas and the proper burial of others. I wish the first book in the series was still available digitally but I’ll keep my eyes peeled for it and in the meantime, I’ll peruse the blurbs for the others. B