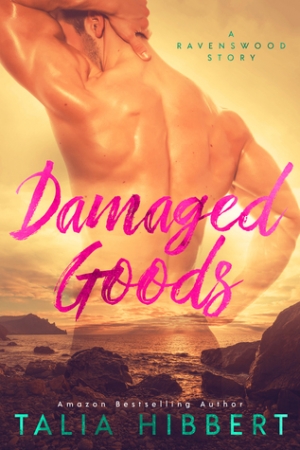 After the success of A Girl Like Her, I was all over the next book in the Ravenswood series, this novella-length (long novella) story about Laura Albright (Burne) and Samir Bianchi, her long lost love. Damaged Goods can work as a standalone but I think it works best when read after A Girl Like Her – and as I adored that book, it’s more a feature than a bug IMO.

The villain in the earlier book is Daniel Burne. Laura is Daniel’s wife. In A Girl Like Her Laura doesn’t come across super well. She is part of the (large) group of people who shun Ruth. To be fair, Laura believed her husband’s tales about Ruth. Or, at least, that is how it appears in that book. I haven’t gone back and re-read the first book to see if I’d see any subtext there but it is clear from what is revealed in this novella, that Laura was emotionally and physically abused by Daniel. He was controlling and mean, systematically destroying her self-esteem. I remember her as being snobby and catty in A Girl Like Her. Perhaps that was a front. Perhaps she both feared her husband but also believed him at least when it came to Ruth? I guess both things can be true. By the end of the book, when the truth had come out Laura certainly made an effort to offer an olive branch.

In any event, Damaged Goods takes place a short time after the main events in A Girl Like Her. Laura is pregnant. She has left her husband, after having spent some time living with her father-in-law and has traveled to Beesley-on-Sea to spend the rest of her gestation period by the beach, preparing for motherhood, finding herself, putting herself back together. Daniel and Laura are not yet divorced but Laura has put things in motion to finalise her marriage.

She remembers Beesley-on-Sea fondly from a short holiday she and her family took when she was 15. She had a summer romance with a boy she met then, Samir Bianchi. To her surprised delight, she (literally) stumbled across Samir, now all grown up of course, on the beach on her first night in town.

Samir is part Moroccan and part Italian-English. He runs Bianchi’s, a cafe in town. Samir’s wry self-deprecating humour made me laugh from the beginning.

“Really? Military?” She wrinkled her nose. Samir’s twin had been, if possible, even wilder than him.

“Yeah; he says it helps with his temper. The order keeps him calm. “

“What keeps you calm?”

Even though Laura is clearly pregnant, Samir finds it difficult to think of Laura as a friend only.

But he wasn’t going to think about that. She was pregnant, and pregnant people were like the Pope, right? You had to treat them with total respect, even in your own head, just in case God was watching.

Samir isn’t just funny though. He is very sensitive and in tune with Laura’s needs and fears. He notices things. Laura doesn’t launch into an explanation of her life when they first meet again. It takes time for her to have that conversation. But Samir gets the gist from the way Laura holds herself, her reactions and her demeanour. He is completely unfazed by her pregnancy or her  relationship status. He feels what he feels but he doesn’t immediately leap to her needing to return those feelings. When it becomes apparent that Laura’s feelings are at least beginning to match his own, he has no trouble telling her he’s all in. It’s quite lovely.

“Good. I want to complicate things with you. I want us tied together in a knot so indecipherable, people look at us and can’t imagine how we’d ever come apart.”

Laura is a bit funny too. She is learning to go easier on herself and not take herself too seriously.

She pushed her hair behind her ears, except there was nothing to push because she’d braided it up for bed. So she ended up kind of… uselessly stroking her own face.

In Beesley-on-Sea she is relearning the person she was and deciding who she wants to be in the future.

When Laura does eventually tell Samir what he has suspected about her marriage, he gives her the best possible reaction.

He didn’t press for details or explanations or emotions she was too tired to give.

Instead, he said simply, “I believe you.” And she was flooded with a relief so intense, it was almost painful.

There are trigger warnings in the front of the book, detailing the kind of content and in which chapter it can be found. Samir has a history of abuse by his parents (mostly emotional) and of course, there is domestic violence in Laura’s past. Because of his history it made sense that Samir would be more sympatico with Laura’s but there is scant detail about his childhood in the book. It is mostly alluded to, with one scene illustrating the dysfunction of his parents in more detail. I didn’t want more information for salacious reasons or because I have a taste for torture porn. But I didn’t really understand why Samir’s parents were the way they were. Perhaps that’s harsh and I didn’t really need to? I mean, Daniel is just an arrogant dickbag with an inferiority complex; I didn’t really need to understand more than that about him to understand that Laura’s experience was. Maybe it’s different with parents. Maybe it’s different with Daniel because I ‘knew’ him from the earlier book. But in any event, I felt the characterisation/motivation of Samir’s parents, for why they so liked to mess with each other and their children, was a bit thin.

I wasn’t entirely sure that Hayley, Laura’s sister’s character was entirely consistent across both books. But I thought it was nevertheless believable that Daniel’s influence was still at play there.

There were a number of typographical/editing errors – some words missing and some misspelled, which was a little disappointing, but they didn’t detract overmuch from my enjoyment of the story.

I had no trouble believing the relationship and the HEA between Samir and Laura however. They’d known each other before – admittedly when they were both 15 – but there was some history there and the book, though short, does take place over a period of around six months (ish). And really, who wouldn’t fall for Samir??

It was also nice to catch up with Ruth again and to see the friendship which had clearly blossomed between she and Laura in the intervening time between the books.