This is a tough book to review because it is the fifth book in an epic romance fantasy story and this story brings to conclusion plot arcs that began in book 1.   For that reason, the measure by which I have judged this book is how satisfying I found it to be as a reader and fan of the series.   How helpful this is to others, I have no clue.   Further, I don’t think that there is anyway that I can write a review or anything about this book without spoiling it for those who haven’t read the series. 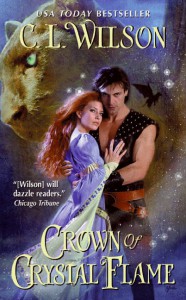 I will say from the outset that I don’t think this is a good place for new readers to start and the idea of beginning a five book series has to be daunting for new readers. I know that I have shied away from plunging into a highly recommended series because of length.   However, if there are new readers out there who are looking for a good fantasy romance read, I do think that this is a good series to pick up.   Fortunately Avon has re-released in paper and in digital, the entire series in anticipation of this fifth book conclusion.    And if you are picking up the series for the first time, you are lucky you don’t have to wait for the next book to come out.   (I’m saving up all the Moning books because I’ve heard that the wait between books is agonizing).   With those prefatory remarks, let’s get into the book.

Ellysetta and Rain are leaders of a Fey culture that is faced with external threats and internal disease. They are on the brink of war against the Eld, followers of Seledorn, who seek to destroy the Fey and overtake the humans and impose an evil and cruel rule over the world. Internally, the Tairens, creatures that are magically tied to the health and well being of the Fey are dying and are unable to procreate.   If the Tairen die, so do the Fey.

The threats, however, may be intertwined but the most incipient threat is that of war. The Eld are creating Tairen destroying weapons and human destroying creatures.   The Eld have spent decades infiltrating the human world at the highest levels and now will be triggering these Mage entranced humans into engaging in war against their friends and neighbors.

There is a more personal danger to Ellysetta and Rain.   Ellysetta has a tie to the High Mage of Eld.   Everytime she works deep magic, she exposes herself to him, exposes herself to be overtaken by the God of Shadows and become filled with evil. I didn’t find this to be a character arc because magic is the answer to this struggle rather than a personal determination to not give in to the evil.

Probably the biggest criticism of this series and of this book is the derivative nature of it. There are some components of the story that tracked closely with Tolkien’s series: the Eld, the creation of a mass Eld army out of earth, the inclusion of Elves, what roles the Elves play in the fight against the Eld.

There are quite a few battles in this book and I lost track of everyone but that is probably more a flaw of mine than a criticism of the writing but there is a good balance between the battles and the character interaction. There is a huge cast of characters and I could not remember some characters from one section of the story to another.

This is a satisfying conclusion to the end of the saga. Every loose end seemed to be tied up and there is a satisfying conclusion for what started in book 1. While the roots of the story are firmly planted in the romance genre, this entry is more about plot than character development.   The romance you see here is strengthened between the main protagonists: Ellysetta and Rain and there are poignant stories about love lost and love regained which fill in the gaps, perhaps, that exist because Ellysetta and Rain’s romance primarily takes place in books one and two.   But while I thought the story focused a great deal on the conclusion of plot arcs, there is a lot of emotion here based on the character interactions and it is full of romantic passages:

When a Fey warrior meets the woman who completes him, his soul's truemate, he knows in an instant. And in that instant, whether she will have him or no, he binds himself to her, heart and soul with the words "Ver reisa ku'chae. Kem surah, shei'tani."  which means "Your soul calls out. Mine answers, beloved." And he spends the days of their courtship-‘the rest of his life, if necessary-‘proving himself worthy of the magnificent gift of her love.

I admit that   would have been happy if I had just had an ending to the last book – Shan and Elfeya freed. Evil defeated. HEA for all.   One area of complaint that I would have is that   I would have liked to spend a little more time with Shan and Elfeya, two of the elder Fey characters, given how much they were tortured and struggled. Maybe there just wasn’t space but if there was anywhere I felt cheated it was in the resolution to this couple’s story.   B