Warning: mysqli_query(): (22032/3141): Invalid JSON text in argument 1 to function json_contains: "Invalid value." at position 0. in /home/customer/www/dearauthor.com/public_html/wp-includes/class-wpdb.php on line 2187
 REVIEW: Counting Down with You by Tashie Bhuiyan
December 22, 2021

I picked up your romantic contemporary YA novel, Counting Down with You, after it was nominated for the Goodreads Awards in the Young Adult Fiction category. It didn’t win but I am glad it was nominated because I wouldn’t have found it otherwise. 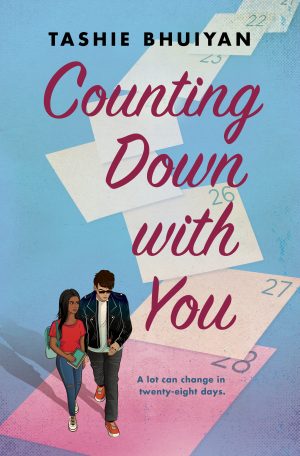 Karina Ahmed is a sixteen-year-old Bangladeshi-American high school student and her parents are demanding. They expect her to excel in math and become a doctor, to stay away from boys (especially white boys), to not wear anything revealing, and to always defer to them. They treat her with suspicion and judge her for every minor infraction while her younger brother Samir can do no wrong.

Karina loves her parents and knows that in immigrating to the US they sacrificed for her and her brother so they would have the opportunities they now have. She understands that her parents’ expectations stem from that. At the same time, she sometimes feels they want her to live her life for them and not for herself.

When Counting Down with You begins, Karina’s parents go on a month-long trip to visit family in Bangladesh and leave her and Samir under the care of her dadu, her beloved paternal grandmother. Dadu is a loving and more understanding guardian and Karina, whose parents’ attitude has led her to develop anxiety, feels like she can relax and breathe a little easier for the next four weeks.

Karina has two tight friends who support her, Nandini and Cora. They are funny and silly and always have her back. They helped her identify her condition and they try to understand her stressful situation at home (Nandini, who has somewhat strict parents and who also comes from a South Asian background, has a better grasp on this than Cora). They also promise her that she will go to the junior prom with them even if she has no date, although they think she will have one. Karina can’t imagine that she’ll ever get asked or that in the event she is her parents will allow her to attend.

Karina’s favorite subject at school is English and her dream is to be an English teacher. No one in her family knows this because she is afraid her parents will flip out if they catch even a hint of it. When her English teacher asks Karina to take over tutoring a boy in her class and offers to let Karina out of a big poetry project if she does, Karina accepts because she loves and looks up to her teacher.

Ace (short for Alistair) Clyde has a reputation for being the school bad boy. He often misses class and his leather jacket adds to his image. His family is wealthy and his brother Xander is the opposite of him, a successful student and the class president. Ace is also handsome and Nandini and Cora think he’s swoony. Despite the fact that he’s never had a girlfriend they love the idea of Karina being in his vicinity.

The first day Ace is a no-show for the tutoring. The next Karina finds the snarky study guide she prepared for him and gave him in the trash. But later that afternoon he surprises her by appearing at the library for their study session. She is so mad her anxiety forgets to make an appearance and when she gives Ace a piece of her mind, he respects what she has to say.

Ace has difficulty focusing on The Scarlet Letter, though, and he suggests they move their discussion to a sweet shop, where he buys Karina cheesecake. Karina enjoys the afternoon enough to lose track of time and then she freaks out about being late before she remembers that her parents are away and she won’t get in that much trouble.

Ace notices her anxiety. The next day he brings her coffee and it’s evident he paid attention to something else—that she likes it with cream and two sugars. It’s obvious to Cora and Nandini that Ace likes Karina but Karina thinks they’re reading too much in. She is starting to like him herself, though. He’s a much nicer and more thoughtful boy than she anticipated.

Then Ace asks Karina to pretend to be his girlfriend so that Xander won’t find out that Ace is being tutored and rat Ace out to their father. When Ace bribes Karina by promising to buy her ten books of her choice, she agrees even though part of her is terrified.

Karina and Ace continue to get to know each other and quickly fall in love, although Karina denies her feelings for a long time because feelings for him could get her into so much trouble. Ace has a dream of his own that he has not told his family about, but for different reasons than Karina’s. His home life also has its problems (divorced parents, dissatisfied father, and the asshole Xander), though his situation isn’t as difficult as Karina’s. He’s a sweet person and loving to Karina and he supports her in ways most of her family doesn’t.

Eventually, Karina can no longer deny her feelings for Ace. Cora and Nandini think she should go for everything she wants—an English degree and a romance with Ace—but Karina is terrified of what will happen when her parents come back. If broaching the subject of majoring in English is likely to make her parents flip out, the consequences of dating a white boy could be a hundred times worse.

Karina is a touching character, at once scared and brave, loving and protective of those around her despite all that she faces in her own life. She is someone who cares and someone who tries so hard. Her love of English and of books is icing on the cake.

Ace is too perfect, dreamy in just about every way a boy can be. He falls for Karina almost immediately so the fake relationship doesn’t feel fake on his part even in the beginning. He’s got both a wealthy family (eye roll) and a bad boy glamour even though he’s not a bad boy at all. He buys Karina cheesecake and books, makes her playlists, and is never less than supportive. He even makes a gallant gesture to her grandmother. He was an over-idealized figure and it was annoying at times but never unbearable because Karina needed someone like that in her corner so badly.

Another criticism I have is that Karina felt safe to do things like hold hands with Ace in public places. Given her anxiety, I would have expected that she would fear that someone who knew her parents might turn up at any moment and then the jig would be up. But this didn’t cross her mind and that felt like an inconsistency. A lesser issue is that the chapters frequently end with redundant statements or ones that are a little too on the nose.

It’s a very sweet book because Ace is so wonderful to Karina and because he and Karina are so in love and so cute together. But it also made me cry at times because of the way Karina’s parents’ behavior has made her feel that she could never fully allow herself to be herself.

The novel is called Counting Down with You because Karina is counting down to the day her parents will come home. The book is structured around this countdown; chapters are titled “T-Minus 28 Days”, “T-Minus 27 Days”, etc. Additionally, Karina often counts backward from ten. It’s an anti-anxiety technique that she tries to calm herself with when her stress level gets unbearable.

This is an #ownvoices novel. Author Tashie Bhuiyan is only twenty-one years old and this is her first book. There’s a letter to the reader at the beginning of the book that, without going into the details, makes it clear that the book is based partly on personal experience. She writes that the book was written as a love letter to young brown girls and closes her letter with the words “If there is only one thing that you take away from this book, let it be hope.” At the same time, Bhuiyan makes the point that brown girls are not a monolith and that their experiences and backgrounds differ. She shows us that Karina takes spiritual comfort from her faith, and through the sweet and loving character of Dadu, she shows us that Karina’s parents are extreme, even if not entirely anomalous.

Dadu and Karina’s relationship is tender and soft, loving and supportive in the best way a grandparent/grandchild relationship can be. And that’s not one-sided—Dadu is there for Karina and Karina tries to be there for Dadu as well. There is also another character in Karina’s community who proves to be in her corner when she most needs it. I won’t spoil who but like Dadu and of course like Karina herself, this character wound up being one of my favorite people in the book.

There is, of course, diversity and representation here. Karina and many of the other characters are Bangladeshi and Muslim, Nandini is Indian and Sikh, Cora is bisexual and half-Chinese, and Ace’s stepmother and stepsister are Black. The anxiety representation is excellent.

Motifs of poetry, music, and celestial bodies are woven into the book. Karina has a notebook of poems that she writes but won’t show anyone, poems where her heart is revealed not just to the reader but also to herself. Ace loves music, plays the piano, and makes playlists for Karina. He’s also drawn to astronomy, and imagery and metaphors in the book use the moon and stars. And of course, the countdowns are another motif, the one reminding Karina to breathe, the other reminding us that Karina and Ace only have so much time and that, because Dadu will be going home soon, time may also be running out for Karina to choose to risk telling her parents what she really feels and wants.

For a YA novel, Counting Down with You leans hard into the romance, which is just as prominent as the coming-of-age element. Even though my own background is very different from Karina’s, I still identified. My community also has its share of parents who hold their kids to high standards and/or expect them to only date people of a similar background. This is a good book for anyone who has ever felt they weren’t fully accepted for who they are by family members or who wished they had more freedom to be themselves as teens. Which, let’s face it, is a lot of us. B.