REVIEW: Christmas Angel for the Billionaire by Liz Fielding 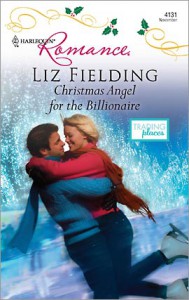 I’m not sure if you were inspired by Roman Holiday starring Audrey Hepburn and Gregory Peck but there are a lot of similarities. Audrey plays a princess who, struggling under the strictures of her position, decides to flee. Princess Ann falls asleep on a park bench and is rescued by Joe Bradley, a reporter. He takes her back to his apartment. Over the course of a day or so, Ann and Joe fall in love, but they can’t be together because of Ann’s duty to her people. Cue bittersweet ending. (I always thought that Ann shipped Joe in for regular loving because what’s the point of being a princess if you can’t bone your lover from time to time?)

Roseanne Napier is the daughter of the Marquess and Marchioness of St Ives who died during a humanitarian effort when Rose was 6. Lady Rose, or Annie to her intimates, grew up to be the people’s princess. Unfortunately all that Annie does is smile, shake hands, smile, kiss babies, smile, go to parties. Her only skill is looking good and being polite. Every part of her life is rigidly controlled and now it seems time for her to get married and have children. Her grandfather has the perfect candidate picked out, one Rupert Devenish, Viscount Earley. The crushing weight of the public expectation is making her crazy.

After one event, Annie runs into her double. There is a professional lookalike that Annie’s handlers have hired for security purposes but Annie asks her what she charges, just in case Annie would like to have “a day off.” Lydia, the lookalike, gives Annie a card and tells her to call anytime. Annie tells her grandfather that she just wants a week to think about her future, but in reality, Annie just wants a vacation from everything. She gets in a car and drives until her car breaks down in Maybridge.

Stranded, Annie is ultimately rescued by George Saxon and his truculent daughter, Xandra. George has been an absentee father, at first because he was working hard to provide for his young wife and child; and later, as his wife and he parted, Xandra, turned to other men for guidance including George’s father. In the end, George drifted away from Xandra completely providing financial support and occasional visits. Xandra was essentially raised by George’s parents but what she desperately wants is her father and she engages in classic teenage behavior to get his attention.

George has been at odds with his father since his high school years when it became apparent that George had no intention of carrying on his father’s mechanic / car repair business. Xandra is, however, and it is just one more source of conflict between the two. George resents his father’s easy relationship with Xandra and is filled remorse for his failed relationship with Xandra. He doesn’t know how to reconnect.

George knows right away that Annie is lying about who she is and why she is in Maybridge and initially can’t wait to usher her out of the door but in the end forces conspire to place Annie in George’s home. Through Annie’s help, George comes to realize that there is a relationship that can be repaired with his daughter, even if it will take time and commitment on his part.

Annie has to come to grips with what she feels like she owes her grandfather and the public. She’s been the people’s princess, always striving to please everyone as if good deeds will fill the hole left in her heart by her parents’ death. She’s unprepared to really let go. The week’s vacation is just that, a temporary respite from her duties. But in order for her to be with George and live the life that she has always longed for, she has to let go.

I felt like Annie’s path to emotional fulfillment was easier than George and I was disappointed at how quickly it seemed that Xandra and George would patch things up given the long history of dereliction. I wondered that Xandra wouldn’t have been resentful of the attention that George was paying Annie or if I was supposed to believe that Xandra saw Annie as a way to secure George’s presence in Xandra’s life.

I did love   the Roman Holiday feel to the book and I thought Annie and George’s characters were sweet and honest. As a holiday themed book that riffs off one of my favorite movies, I can’t help but be fond of it despite its flaws. B-