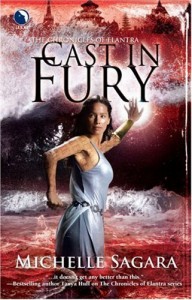 I suspect longtime fantasy readers are more familiar with the epic fantasy novels you write under the Michelle West name.   But because those tend to fall in the doorstopper length category, we often have to wait a few years in between releases.   That’s one of the reasons why I like the Kaylin books you write for Harlequin Luna.   They come out on a roughly annual schedule, so I think of them as snacks to hold me over until your next Michelle West novel.

Cast in Fury is the fourth novel in your series about Kaylin Neva, a law enforcement officer for the capital of Elantra.   Elantra is a city in which humans live alongside five humanoid races: the Barrani (faerie analogues), the Aerians (winged people), the Tha’alani (a psychic race identified by their forehead stalks), the Leontines (cat people), and the Dragons (er, dragons).   One of the things I like about this series is that each of the books tends to focus on a specific nonhuman race, allowing us to learn more about them.   That’s one of the great things about the fantasy genre; exploring new cultures through the lens of created races.   As you mention in the foreword, Cast in Fury is the Leontine book.

Picking up immediately after book 3, Cast in Secret, Kaylin is assigned to serve as a cultural consultant for the imperial playwright.   Because of events that happened at the end of the previous novel, the Tha’alani have become targets of violence.   Due to their psychic abilities, the Tha’alani have always been viewed with mistrust.   No one likes having someone rummaging around your head and for the Tha’alani, this is considered normal.

The Dragon emperor has charged his playwright with creating a play to humanize the Tha’alani for the sake of cultural understanding, with the added benefit of defusing the civil unrest.   Since he considers Elantra to be his hoard (like in classic stories, dragons hoard treasure, wherein “treasure” can mean any number of things, not just gold), the dragon emperor would prefer his people not to kill each other while they’re under his care.   It’s a situation further complicated by the fact that the playwright doesn’t understand the Tha’alani himself, and the Tha’alani consider any play he creates to be nothing more than lies.   (Because of their collective consciousness, the Tha’alani are able to have a thing called absolute truth.)

That’s a difficult enough assignment for the often tactless Kaylin, but matters are made worse when her immediate superior, Sergeant Marcus Kassan is accused of murder and sentenced to be executed for the crime.   In addition to the fact that he was like a surrogate father to Kaylin, Marcus is the only Leontine to serve the law enforcement division, a very significant fact not easily overlooked.   Unfortunately, witnesses were present so all evidence points to his guilt.

If this were a different book, we’d looking into how and why Marcus was framed.   What I liked was that this wasn’t that kind of story.   Instead Marcus did commit the murder and Kaylin’s task is to find out why.   It’s a good way to show readers Leontine society and the kind of social mores and taboos that permeate it.

One of the strengths of the Kaylin series, unlike your West books, is that they’ve been more or less standalone.   It’s true that various subplots such as Kaylin’s tangled history with Severn and the mystery of the marks covering Kaylin’s body continue from one book to the next, but the actual main plots start and finish within the same novel.   That can’t be said for Cast in Fury.   Although the main story about the Leontine murder is introduced and wrapped up in the book, the book starts with the playwright plotline.   People who have not read Cast in Silence probably won’t be able to understand the significance of why the play is necessary and why Kaylin being chosen as a cultural consultant is significant.

I also think readers might be initially thrown off by the unexpected shift from the Tha’alani play storyline to the Leontine murder storyline.   I admit it was a little jarring for me at first.   But once I finished the book, I realized the two tied together in their themes: the power of stories.   For the Tha’alani play, the trick wasn’t to tell the truth because to be honest, the absolute truth, as the Tha’alani understand it, would never soothe the general populace.   If anything, it’d only terrify them more and incite more violence.   Instead the playwright has to present a story that’s true in its core, if not in the details.   For the Leontine murder plotline, the history of their race, its creation, and its forbidden magic is intrinsically tied to stories.   Which in turn is tied to the mystery of Kaylin’s body marks.

I liked that the book brought together things that were introduced in previous novels like Lord Nightshade and his interest in Kaylin, or more specifically Kaylin’s power which is much more than the ability to heal, and the outcaste Dragon Lord we first encountered in the first novel, Cast in Shadow.   That said, I still wait with bated breath for a novel about the Dragons and its emperor.   Considering what we learned in Cast in Fury, I’m starting to wondered how exactly that came about.

All in all, I found this to be a satisfying installment for the series but people looking for further developments in Kaylin’s relationship with Severn, her relationship with Nightshade, or the mystery of her body marks will have to wait longer for enlightenment.   And as I mentioned before, this is definitely not the place to start for new readers.   B