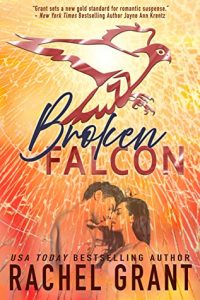 Broken Falcon is book 11 in your Evidence series. It features Chase Johnston who has been a fan favourite for quite some time now having first appeared in book four, Incriminating Evidence. He also had a pivotal role in book eight, Silent Evidence. While I think it’s possible to read Broken Falcon as a standalone, I did actually read Incriminating Evidence and Silent Evidence prior to jumping into this book and I think that benefited me. There is some recapping of what happened to Chase in the earlier books here but you don’t get the full context. And it’s best, I think to read the other two, first. With that in mind, there will be spoilers for earlier books in the series in this review. And if you don’t want to know, please look away now.

I should also mention content warnings/notes for this book. There’s some very heavy topics covered and some graphic descriptions. Chase has suffered sexual abuse and there are some detailed descriptions of it in the book. The story itself also deals with human trafficking and sex work. (Not all of the depictions of sex work are negative. In fact, the heroine of Broken Falcon is a sex worker.  Her experience, for the most part is very positive. She’s proud of her sexuality and the work that she does. I appreciated that. The narrative made it clear that sex work in itself is not evil or bad but that it can be ripe for exploitation.)

Broken Falcon is unashamedly a sex positive book and it is by its very nature hotter than other books in the Evidence series with many explicit scenes.

After Chase was sexually abused he found it difficult to get in touch with his sexuality again. In fact he has little memory of his sexual history before the abuse. Then he found. Desiree, a cam girl, online. For the first time in a long time, he was able to feel sexual desire that he knew was his own. It felt healthy and right and real. When he meets Eden in real life even though she’s not wearing a wig and her makeup is different, he recognises her at once as Desiree.

As an abuse survivor himself, Chase has a side gig with certain members of the Raptor team locating trafficking victims before they are abused and getting them into a shelter. Isabel Dawson, heroine of incriminating evidence and now-wife of Alec Ravissant, the Raptor owner, has set up a confidential shelter for these young, (mostly) women.

One night after rescuing one of these women Chase meets Eden. This brings Chase and Eden’s respective online lives into their real lives in potentially dangerous ways, and puts Eden’s life in danger. Chase recognises Eden straight away. But he doesn’t tell her that. And, because Chase disguises his voice online, she doesn’t know that he is also Falcon, one of her online regulars.

Even though Chase is not entirely honest with her straight away, he does make quite a deal of effort not to invade her privacy and to try and be as honest as he can. When it reaches a point where he knows he has to confess, he doesn’t hesitate. Of course, it does take her a little bit of getting over.

Because of the circumstances of Chase’s abuse, he has a healthy mistrust of psychologists and this is another barrier that they have to get past to get to their happy ever after.

The suspense plot itself has a lot to do with infrasound, which is something that was first introduced in Incriminating Evidence. I haven’t looked it up. I don’t actually know if it’s real or not. Perhaps I’m naïve, but I’d rather think it’s fantastical than actual. I’m generally not a conspiracy theorist and mind control kind of falls into that conspiracy theory bucket for me. For me it took a fair bit of suspension of disbelief to really buy into it. (Maybe it is real though. I don’t want to know, don’t tell me.)

Infrasound, what happened to Chase, and villains from previous books rear their ugly heads again in this novel, and really it’s for that reason that I think it works better if you know the context of the series. The Evidence series doesn’t need to be read in order. You don’t need to read all ten books prior to this book to understand what’s happening, but I do think you need to read books four and eight to really get who Chase is and how he got here.

I do think that by the end of Broken Falcon Chase is in a much better place in all the ways and is finally free.

I had a couple of questions about Chase is extracurricular activities as a Raptor employee. The little sub-team that was trying to help trafficking victims was a sub-team because what they were doing wasn’t strictly legal. Everyone in Raptor knew what was going on by the end though. So were they in trouble? Did it just get hand-waved away? What were the consequences?

I liked the depiction of sex work when done by a consenting adult. I liked how Eden enjoyed her work and was unashamed of it. I liked that Chase didn’t put any pressure on her to stop. I liked that none of the Raptor team were at all troubled by Eden’s work as Desiree.

You warned me that this book is a lot hotter than your previous books. So I knew that going in. Even so, I admit it took a little bit of mental adjustment for me, to put this book in my mental “Rachel Grant bucket”. Still, even though it was something of a departure for you, Broken Falcon was hot and creative. It showed the connection between the characters and it showed a positive depiction of sex work, which, in the context of this book, I think was really necessary.

Some elements of the suspense plot didn’t quite work for me. But I certainly bought into the romance. And I’m very glad to see Chase finally happy and free.