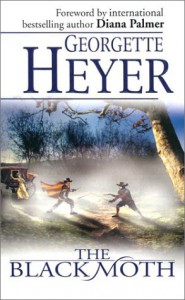 I’m sure if you’ve ever had a conversation with more than…oh, two romance readers, one (or both) have them have told you to read Georgette Heyer’s books. Or squeeed over them. Or said how much Heyer has influenced her life. Or said something about how she just doesn’t get Heyer. Or otherwise mentioned Georgette Heyer. There’s a good reason for this, of course. For all intents and purposes, Georgette Heyer invented the historical romance, and certainly the Regency romance in its current form (which is not to say that there weren’t historical romances before she was writing — The Scarlet Pimpernel, anyone? — but she solidified the conventions, the heroes, the heroines, the situations, the languages, the time period).

She did not do this with The Black Moth, however. The Black Moth, in fact, was her very first book, published when she was 19. It is set in 1751, not in Regency England, but instead solidly in Georgian England, where men wore wigs, high heels, and make-up as well as the women. Published in 1921, between the wars (and 15 years after The Scarlet Pimpernel), The Black Moth tells the tale of Jack Carstares, Earl of Wyncham, exiled from polite society because he cheated at cards. He rescues the innocent Diana Beauleigh from the clutches of Tracy Belmanoir, the Duke of Andover…except he only does this just less than half way through the book. Up until this point, they hadn’t even met in a book that is nominally their romance.

So this book also tells the tale of Richard Carstares, Jack’s brother, the man who actually cheated and let his brother take the blame because he was so wildly in love with Lavinia Belmanoir, the Duke’s sister. They married after the scandal, but Richard has been wracked with guilt for six years and is convinced that to make things right with Jack, he has to sacrifice his beloved wife’s affections. So it’s the love story of a marriage in trouble — in fact, to me, this romance was much more compelling than Jack and Diana.

And it’s also the story of Tracy, nicknamed the Devil, because he knows all, sees all, has very little morals, and manipulates everyone in the book, but is still, somehow, a sympathetic character — he is, in fact, the prototype of the repellent, yet unaccountably attractive dark, amoral hero.

This book is, as Heyer’s own characters would say, a mad romp. It’s got sword fights and gambling, gallops over the countryside, abductions, love, melodrama, wonderful characters, and so much fun. It’s not her best, mainly because her best is truly superlative. But for a 19 year old, it’s pretty awesome. The three different subplots all roll together and tie off beautifully together at the end. I personally love it because above all else, it’s really an exploration of the definition of a “good man.” While Diana in particular is a bit of a cipher, more a porcelain doll than anything else (although she shows some spirit when she basically proposes to Jack), the other characters are really well-drawn. If they feel like cliches, it’s because Heyer invented them and they’ve since been reused time and again. You really feel for the characters, despite or even because of the melodrama and I actually love the character of Richard (except in that he’s called “Dicky”!) the best, because he’s tortured and makes the most moral progress in the story.

All in all, it’s over-the-top and laugh-out-loud funny and is a good place to start with Heyer’s books, because it’s just so much fun and, to our Regency-saturated reading habits, a little different.

P.S. And as an Easter egg for those few who don’t already know, all the characters are revisited with different names and slightly different relationships to each other in These Old Shades, in which Tracy, now Justin, the Duke of Avon, finds his HEA. These Old Shades is one of my favorite Heyers, but then, I think about 15 books occupy that list. :)

P.P.S I’m writing this review because I’ve been immersed in this book for the past two weeks because I’m writing an Introduction for a new Barnes and Noble edition. It must have recently entered the public domain to receive this treatment. Look for it later this year!

This book can be purchased at Amazon and Kindle (which is currently $.99).

→ SarahF
Previous article: My First Sale by Monica Burns
Next Post: Monday Round up Links: A New Kind of Book Tour