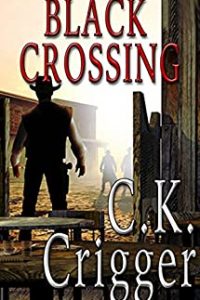 “A woman’s revenge and a man’s honor meet on a collision course… Isaac Gilpatrick witnesses the killing of old Marshall Blodgett, and when his mother Ione is threatened with death–or worse–he is intimidated into remaining silent. But the guilt he carries wears at Isaac’s nerves until he can bear it no longer and vows to put the information into the new marshal’s hands. Unfortunately, Marshal TJ Osgood arrives in town too late. He finds Isaac silenced for good after a crooked judge ordered him hanged. Now, with an under-aged deputy and a hound dog as his only allies, Osgood must sort out the truth, protect the bereaved Ione Gilpatrick, and bring a rough bunch of backwoods timber thieves to justice. That is, if Ione doesn’t beat him to it…”

Your Westerns remind me of the gritty style of 1970s movie westerns where the bad guys didn’t always wear black hats and the good guys were often frayed around the edges. Anti-heroes, I think they were called and Marshal TJ OSgood is a great example of one. The story is really more focused on Osgood and his arc than Ione. She changes a bit, is willing to trust men despite her miserable husband and the villains who killed Isaac but it’s mainly TJ Osgood learning that he’s a better man than he thought and that he’s still got a good lawman in him.

Osgood a man who feels he’s weak but who is really stronger than he thinks. He knows he’s got demons – hell the man who hired him knows Osgood has issues, ones he’s still fighting after they almost licked him. But he’s also got a strong sense of right and wrong and is passionate about the law. Something that those who counted on his weakness didn’t realize. He’s also faced with a strong woman determined to get revenge for her murdered son and at times I get the impression Osgood isn’t sure which side is causing him more problems!

Ione might look scrawny but she’s rawhide tough. As with Osgood, you don’t load us down with backstory which means nothing or current angsting. I can’t see any of your characters wallowing in angst. They do what needs doing and keep going. Ione has obviously had a hard life but no one hears her complaining. When her son is killed, the villains don’t know what they’ve unleashed – the power of a mother seeking vengeance and not afraid of doing what must be done to see to it.

Osgood first has to prove himself to himself and then to the town and then to Ione and then to the villains who misjudge him almost to the end. I enjoyed watching him rise to the occasion and outthinking his opponents. Brains almost didn’t beat brawn but he’s a tough old coot and not above fighting as dirty as those who have no honor and laugh at those who do.

Ione lets her temper and anger spur her into danger, not that it wouldn’t have found her soon anyway, but she senses the danger, acts to avoid it and when it kicks down her door, she still thinks then continues to fight. When she’s the one who takes revenge on one who helped murder her son and the man who would have helped to eliminate her – and an interesting “true to the period” way it was too – I cheered. When a character’s been done that wrong, I have little patience with forgive and forget. A steady trigger finger works just fine for me.

I love the dog and love the dog’s actions. I sense that he’s going to be a figure in keeping the peace in Black Crossing for some years to come. Bennie is a dear too. He’s young, he needs a little more seasoning to grow into the lawman I think he could be but with Osgood to bring him up, he’ll do just fine.

I like the individuals of Black Crossing and how, even if they’re only on stage for a short time like the stage driver, the postman, the general store keeper and the old cusses at the bar, they stand out as people and not just a clump herd of secondary/tertiary cutouts. But why are Western town doctors always drunk?

Osgood is a good lawman. He doesn’t rush to judgment, he checks his facts, he looks into the situation from all angles and refuses to believe the worst until he sees the evidence. But then he does act and he does what he says he’ll do. He proves to Black Crossing, the Coeur d’Alene people and most of all Ione that he’s a man to be trusted at his word. He also takes care of his horse. I like that he’s a bit beat up and has seen a thing or two. I think he and Ione will still strike sparks off each other in their later years but they’ll be pleasant sparks as well as feisty ones.