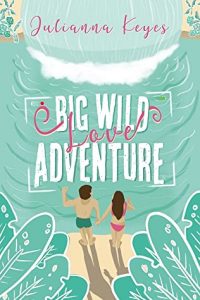 After being ditched at the altar, Emmy Shaw’s heart, like her dented food truck, is definitely not open for business. Deeply in debt to her parents and evicted from her apartment, she takes a friend’s drunken dare and fills out an application for a new dating-adventure reality show. She never expects to be chosen—or to get a chance at the show’s huge cash prize, which could put her life back on track.

But when she’s abandoned in the middle of the jungle two months later wearing only a bathing suit and a backpack, she questions if being on the show might be even worse than the #emmytrashtruck hate brigade she left back home. Then she meets her fellow cast members—including sexy, inscrutable Wes—and starts to reconsider, wondering if maybe money’s not all she stands to gain from this experience.

After a year of abysmal failures, this summer of cave treks, jungle hikes, impromptu talent shows, and a sexy flirtmance turns out to be just the thing to help Emmy rebuild her shattered confidence. She signed up for the show to hide from the mess her life had become, but this escape from reality might be just what she needs to find herself.

I’m not an avid watcher of reality TV unless you count the Great British Bake Off (in the US it’s called the Great British Baking Show) but enough of it has seeped into my consciousness that I understand the concept. I have never actually watched a complete episode of The Bachelor or Love Island. You might think therefore that I’m the wrong audience for this book. But unlike the TV shows, I had access to what was really going on in Emmy’s mind and not an edited-for-TV version and I expect that made a lot of the difference. That said, I also think that fans of reality tv/dating shows are going to enjoy the book too – albeit differently, being far more familiar with the format than I am.

When I read the blurb I thought Big Wild Love Adventure (the name of the show Emmy is on) would be more like a cross between Naked and Afraid (I’ve heard of it, never watched it though) and Love Island (ditto) but it was much more the latter than the former I think. There was less Panamanian jungle survival and more cash prizes for challenges involving jelly and custard.

The story is told completely from Emmy’s first person point of view. We get the other characters through her lens. The cast is necessarily large – there are initially 16 “adventurers” – 8 men and 8 women who are paired up in various ways over the course of the story, with couples being eliminated periodically, along with some “surprise” adventurers who turn up later. About half of the contestants have a reasonable storyline and arc of their own; over the course of the book I came to care about most of them. Especially Tad. He started off as a caricature but actually he turned out to be very sweet. Even if he does wear a speedo. (shudders).

For Emmy, it is always pretty much Wes but they are not always paired together and so it takes some time before they have any opportunity to do more than gaze at each other from across the “dating pool” during the “re-pairing ceremony”. I admit I’d have liked a little more of Wes. I missed having his perspective and getting to know him better.

I also admit I was secretly hoping for a twist where one of the adventurers chose to “re-pair” with a person of the same gender identity instead of it being quite so heteronormative – even if it was more about strategy than attraction (though the latter would have been welcomed – who’s to say that there were no bi contestants?). I was curious to know what the producers’ reaction would have been to it. Alas, it never came up.

Big Wild Love Adventure is most definitely a romance but it is also a book about Emmy learning things about herself and healing after her life takes some disastrous turns. There is at least as much focus on those issues as her romance. And, there are threads of other romances between some of the contestants as well so the focus is not solely on Emmy and Wes (Wemmy? Wesmy?) – though of course, those stories are told only from Emmy’s point of view.

Emmy is drunk when she applies for the show, basically on a dare from her assistant, Bailey. Bailey is a would-be fashion designer and packs Emmy’s bag with clothing full of terrible puns – all of them sexual – some of which I laughed at. I definitely laughed at the way the whole cast and crew soon began to chant “My assistant packed my bag!” before Emmy could and her regular (and unserious) response of “she’s fired”.

Tad’s first go at “shooting his shot” was hilarious and cracked me up. Honestly, #JusticeforTad.

I had a few questions about exactly how Emmy and Wes’s HEA was going to work out given they live in different cities. That said, the book also explicitly acknowledges that they are only at the beginning so there’s plenty of decisions to make along the way. I was confident they’d make it work long term though.

I picked up a few references to other reality TV/dating shows but I’m sure I missed many as well. It’s clear that you are a fan of the genre and wrote the book fondly.

I liked Emmy very much and how she grew over the course of the story; becoming confident in asking for what she wanted and going for it. (Also, she’s a baker so her desserts had me won over from the beginning.) Wes is more like me – a bit more serious and considering, definitely the look before he leaps type. He applied for the show because his friends kept telling him he was dull and boring and not spontaneous enough. (I prefer steady and dependable but tomato/tomahto.) It turns out that being spontaneous once in a while can really pay off.