Warning: mysqli_query(): (22032/3141): Invalid JSON text in argument 1 to function json_contains: "Invalid value." at position 0. in /home/customer/www/dearauthor.com/public_html/wp-includes/class-wpdb.php on line 2187
 REVIEW: Beyond the Shadows by Jess Granger
May 5, 2010

REVIEW: Beyond the Shadows by Jess Granger 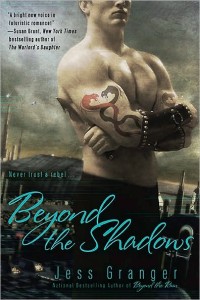 Let’s face it: I love romance in space, having to do with space, or having the element of the alien (and I don’t mean Sigourney Weaver Alien). Nowadays it seems particularly hard to get past all of the vamps and shifters and move off (or into the future/alternate past/Star Wars) of this planet. Beyond the Shadows starts out in just the right place: a bar in a spaceport with a pissed off woman used to being in command:

“I am not going to pay some rankock-licking Earthlen scum for passage on a junked-together freight hauler that doesn't even look capable of ï¬‚ying through the atmosphere shield. When will another ship arrive?"

If Commander Yara wasn’t quite so desperate to get back to her home planet Azra, she probably would have given more than a passing thought to the fact that a major base only had one trade ship docked. However, Yara is next in line for the throne of Azra, a position she’s been training for from birth, and is willing to take whatever transport is available. She’s on a mission to prevent a war from breaking out on Azra, and Cyn is on a mission to get a war started.

Along with the other Azralen rebels, Cyn is determined to see change come to his home planet. He’s disgusted with the ruling Elite and their treatment of the lower classes. Disguised as an Earthlen trader, Cyn’s job is to keep Yara from Azra just long enough for the revolution to start. He’s immediately attracted to Yara but delights in playing the uncaring Earthlen trader that doesn’t need or want to respect her authority.

"Listen, you . . ."
"Rankock-licking Earthlen scum?" He tilted his head as he watched her. "I'll concede the Earthlen scum bit, but I draw the line at rankock licking. Licking rankocks isn't my idea of a good time, Pix."
[…]
"I don't know who you think you are, but I am still a commander on this base. You will address me as such or I'll watch you rot in conï¬nement for a week."
The corner of his mouth twitched as he took another drink. "Yes, sir."
He placed the glass back on the table, never once breaking his eye contact. "I'm sorry. I don't take on passengers. You're out of luck." He leaned back into the shadows, giving her a reprieve from his gaze.
"Everyone has a price," she hissed, unable to contain her ire. Did he think he could just dismiss her? "Name yours."

Yara and Cyn’s tension-filled exchanges don’t stop at the spaceport. They constantly grapple for the upper hand, and Cyn comes to respect Yara in a way he didn’t expect, making his deception even more difficult than it already was. As they go on a space-roadtrip of sorts, the worldbuilding is incredibly strong, with shady (and disgusting) slave traders operating outside of Union boundaries, secondary characters that I can’t wait to read more about (I’m thinking of you Xan and Maxen) and richly drawn and described planets.

I don’t want to give too much away for those that are planning on reading this, the plotline builds strongly from each step in the story. Yara is an incredibly strong character, but she’s naÃ¯ve in nearly everything but the world of the Azralen Elite. The trip back to Azra opens her eyes to the universe around her, but doesn’t diminish her character or personality. Cyn is in a mess of his own making. Unable to reveal who he is to Yara, but unwilling to stay away from her, he realizes that she isn’t the Elite machine he believed her to be. To prevent Azra from collapsing under its own weight, Cyn knows that there must be change, and that change could end up costing lives.

The emotional and plot-based twists and turns in the last third of the book had me questioning how all of the issues were going to be resolved. There is no simple bow tied up on an “I love you”; while a few things are left by the wayside (perhaps to be picked up in the next book in the series), all of the major issues are addressed head-on and the end is as exciting as one could hope for a futuristic space opera. I am going back to read Beyond the Rain, the first in the series. B+

This is a trade paperback published by Berkley. It is not available in digital form that I can find except for in the iBookstore.

→ Shuzluva
Previous article: To Be Read: There’s an App for That
Next Post: REVIEW: Dead in the Family by Charlaine Harris