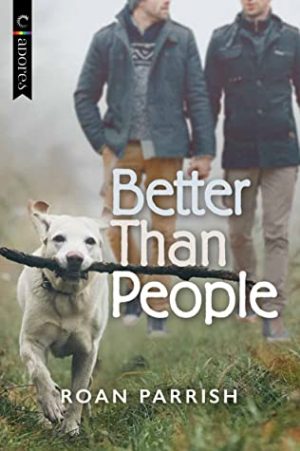 Jack Matheson is an illustrator who has been unable to draw for eight months after a trusted friend’s betrayal. He’s in a bit of a funk and my impression was he wasn’t all that happy with himself about it but didn’t really know how to get himself out of it. He has a menagerie of animals, all rescues, including a St. Bernard call Bernard, a labrador called Puddles who is afraid of puddles and sticks shaped like lightning (among other things), and a cat called Pirate who tends to be the pack leader. Rat, Mayonnaise, Pickles, Louis and Dandelion make up the rest of his animal family.

When Jack falls and breaks his leg he is of course unable to take his dogs (and Pirate) out for walks anymore and so he signs up for “PetShare”, an app which matches people who want to care for pets but cannot have their own, with people who have pets but need help with them. Thus Simon Burke comes into his life.

Simon is a graphic designer who works from home. He has severe anxiety and this largely manifests in social situations and interactions. He finds it difficult to speak to people he does not know well and even with those he does know there are many times he struggles. When he worked in an office, he was traumatised by people coming up to his desk and birthday celebrations were a nightmare for him. When he was in school all of the public speaking assignments made him ill. People often mistake his silence for rudeness and this distresses him too.

Simon had wanted to get a dog but when his grandfather died suddenly he moved in with his grandmother (who is also his best friend) and as grandma is allergic to animals, the dog plan had to be put aside. Simon’s parents and sister don’t get him. They think he should just try harder and “get over it”. His grandparents were always there for him growing up and his grandmother is his fiercest supporter. Grandma was the one who would go down to the school and give them a hard time for giving Simon a hard time. (I heart Grandma.) I liked that the relationship was not all one-sided. Simon provides tremendous support to his grandmother too. I liked their interactions very much – especially the plate scene!

Jack isn’t exactly a curmudgeon but he’s been doing a good job of pretending to be one for the previous eight months and, now that he can’t do all the things for himself that he could before, he’s even worse. Jack has close friends but has dropped contact with them a little in recent times. His brother Charlie helps but Jack is both resentful of and guilty about the assistance he needs from Charlie. Charlie was 17 and Jack was 13 when their parents suddenly died and Charlie stepped up to be the pseudo parent. There is a complicated bond between them. They’re close but Jack resents Charlie’s parental vibe. I suspect (I hope!) there will be a story for Charlie and I’d love to see it from his point of view. I think he just wants to help and feels constantly rejected when Jack arcs up. Even though there is friction, they clearly love each other and, over the course of the book, they begin to forge a better relationship.

At first Jack doesn’t really know what to make of Simon. He’s silent and awkward and good looking and he clearly adores the animals. Simon particularly bonds quickly with Puddles which says something to Jack given how hard it was for Puddles to trust him. For all that, it is really that Jack is lonely and sick of his own company that encourages him to try and entice Simon to stay and keep him company. Jack has twigged that Simon finds it difficult to talk and offers to text and from there the two men build a friendship which burgeons to more.

Simon has never been able to be comfortable enough with someone else for kissing or cuddling let alone sex. But it’s different with Jack. Simon discovers he can communicate with Jack via touch effectively as well.

I liked the way Simon’s anxiety was juxtapositioned with Puddles’ and the bond they formed, possibly because they understood each other so well.

Simon went on chatting to the animals until Puddles stopped short. Simon peered at the ground, keeping Jack’s list of the dog’s fears in mind. It was a stick shaped like a lightning bolt.

He tried to guide Puddles to give the stick a wide berth, but the dog wouldn’t budge. Simon studied the stick, trying to intuit what it was about it that made Puddles so afraid.

After a minute he snorted at himself. Who knew better than him that fear didn’t have to have a reason?

Once Jack’s cast is off and he can go back to “normal” Simon fears that he will no longer be enough for Jack and the pair have to navigate what happiness will look like for them. There is no cure for Simon’s anxiety. He will never be a person who will be able to mingle happily at a party or give a speech at an event. But Jack isn’t all that social anyway so maybe that isn’t a dealbreaker? Maybe between them Simon and Jack can find a happy medium where each can get their needs met without any magic wands being waved.

Over the course of the story Simon helps Jack find his illustrating mojo and encourages him to expand his professional horizons and there’s a lovely nod to The Remaking of Corbin Wale in there too.

I enjoyed the semi-rural Wyoming setting and the animals (I’m a big fan of animals in books, especially dogs) and I liked the way that Simon entering Jack’s life expands it exponentially, notwithstanding that Simon is a very solitary person.

There were a couple of plot threads that I would have liked to know more about – one was a kind of Rear Window-ish thing that didn’t really go anywhere. As I said before I am very keen to know more about Charlie. I do hope he has a story coming out.

Better than People was charming and sweet, sexy and kind but not at all saccharine. I’m coming to appreciate, more and more, that quality of kindness and this book delivers on that score in very satisfying ways.